In the 21st Century, it’s become a fact of life that lasers are expensive. Sure, you can buy a laser pointer from the convenience store for your own DIY hologram set-up, but, in order to get yours hands on a laser with a stable light coherence, the prices can be outrageous. To bring the price of accurate 3D scanning down, it seems that some companies are turning to boring, old, 20th Century, natural lighting, to produce 3D models from 2D photographs. TriAyaam Studio, an Indian software development company, has done just that with their Neitra 3D Pro software.

After Audodesk experimented with the idea of interlacing 2D photos taken with smartphones and tablets to create 3D models, with their 123D Catch app, TriAyaam has followed suit, perhaps, even improving upon Autodesk’s software. The Neitra 3D Pro software uses an ordinary digital camera, such as a smartphone camera, to compile 2D images into a seamless 3D model suitable for 3D printing or 3D art and design.  And it seems to have worked!  Just check out this 3D model of a hearty pizza pie (Click the link! You won’t be disappointed!): 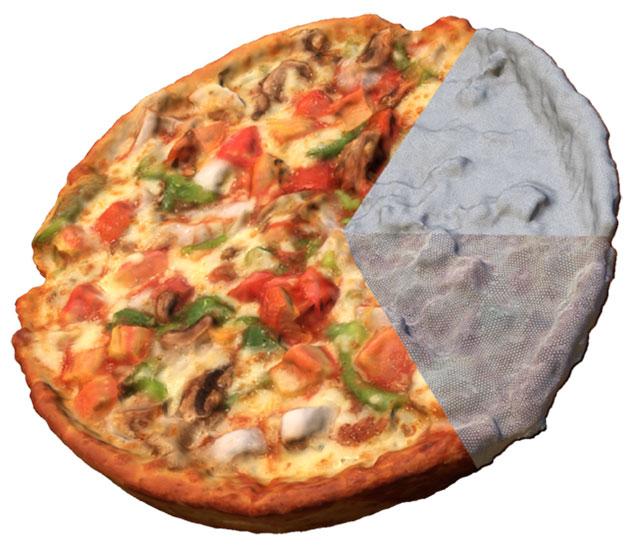 What accounts for their highly-detailed models, it would appear, is the Neitra 3D Pro’s image alignment feature and its two-part reconstruction process. The position at which 2D images were taken is automatically mapped onto the 3D world, creating virtual cameras that correspond to your 2D images. The TriAyaam team assures me that this process requires no manual involvement on the part of the user, saying, “The user just needs to add a set of images to the software and start the image alignment process. Once the process completes, all the camera’s get oriented in 3D space automatically to their exact relative position with each other. There is no manual intervention and the process is very accurate.”

Then, in a semi-automated 2D masking process, you create vague delineations between your object and its background, using simple brush strokes, and a 3D model is crafted.  At first, the model is a crude shape, but, as it is automatically refined based off of your photos, it becomes more and more detailed.  Finally, also with no manual intervention, the software generates a texture map that is projected onto your image, making it suitable for 3D art and design.

Like 123D Catch, it looks as though there might be some small post-processing work to ensure that the scan meets your standards, but the results are quite stunning.  Now, I haven’t used the software because only the first 100 registered users will have access to the beta software at the price of $349 and I just don’t have that kind of money (that money will then go to purchase the full version when it is released).  But, the TriAyaam team has told me that the software will be available as a free demo or as a purchasable, fully licensed version in September. At that point, we can determine how user-friendly the software really is, which, based on the video below, is pretty user-friendly.  If TriAyaam can perfect the process of splicing together 2D images to form 3D models, it may become adopted by other companies that will make 3D scanning affordable and accessible.  Never again will you have to rely on lasers to make your scanning dreams come true!