MBot Puts the Cube in the Past with GRID II

Rachel previously described the uncanny resemblance between the MBot Cube 3D printer and the two large players in the 3D printing field, MakerBot and the 3D Systems Cube.  It both sounded like a 3D Systems or MakerBot machine and looked like the original Replicator.  In fact, it was a derivative of MakerBot’s first Replicator machine. Since then, perhaps as a means of distancing themselves from possible trademark issues, the team behind MBot has evolved, calling itself Magicfirm. And, as Magicfirm, they’ve announced their third generation of 3D printers: the MBot3D GRID II. 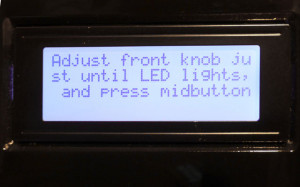 In Rachel’s post, the MBot seemed to be developed mainly in China, but Magicfirm is a partnership between a Chinese design team and a new design centre in Sweden. The resulting collaboration has put out a new 3D printer with some major improvements on the previous derivative design. The GRID II features an automatic 3-point build plate calibration system, in which a probe that’s built into the printhead moves into holes in the printing platform, allowing the printhead to go beneath the bed and calibrate the build plate. Users twist three knobs until the LED screen indicates that the bed is level. The nozzle of the printhead is also calibrated to ensure the proper distance from the bed. Calibration at every point saves a value in the printer’s software so that, when printing, the printer can use these saved values to ensure a precise print.

The GRID II also uses a new glass build plate, laminated with a plastic surface that prevents the need for, as Magicfirm puts it, “a heated plate or adding temporary solutions to the plate.” The platform is attached using neodymium magnets, for easy removal and ensuring that the bed calibration isn’t disrupted when removing prints. The extruder has two fans, for faster cooling, and can be easily accessed for cleaning purposes. Finally, the build volume of the machine is 260 x 230 x 200 mm (about 10 x 9 x 8”), all for €1245 (about $1692.00). The GRID II and all of its features are completely open source so that you can incorporate any of these features into your own designs under the Creative Commons Attribution-ShareAlike 3.0 license.

The GRID II still looks a little bit like the Replicator (2 this time), but that doesn’t mean that it’ll perform like it. We need to hear from people out there who have used the thing to know if Magicfirm has distinguished itself from the other printers out there and its past.