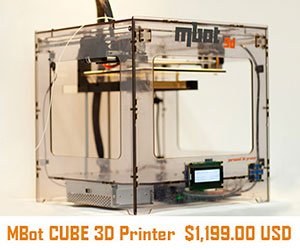 I think I may be somewhat behind the curve on this one but I don’t appear to be the only one. I had one of those weird moments the other day when I saw something that is obviously intended to discombobulate! The second that I saw the image above, I knew it wasn’t quite right and yet I was not instantly able to put my finger on what was wrong – it took a few more seconds to realize that Makerbot and 3D Systems would never co-promote a 3D printer, let alone one that looks so dated. Never, EVER! Next question, therefore, was who on earth would?

Answer: The Chinese company, Mbot 3D, which has developed a derivative (as opposed to a clone) of Makerbot’s original Replicator 3D printer from its open source days. It emerged Q3 last year as far as I can find. So that’s where the ‘Mbot’ comes from, quite unapologetically, it seems. But to call the latest version, with dual extruder and plastic casing, the Mbot Cube is perhaps a branding exercise on the naughtier side of wrong using the established global profiling of two of the market-leading 3D printers that are in competition with each other.

It’s hard to imagine that either Makerbot or 3D Systems are particularly happy with this situation and yet there is little to no information, that I can find anyway, that supports this position. I have asked the question of both parties, but have not had a response from either. The presumption, therefore, is one of indifference. Interestingly, though, the Mbot Cube is available on Thingiverse, and, I have discovered that all three companies will be present at the upcoming Inside 3D Printing expo in New York next week…… fun times.

The Mbot Cube is capable of producing nice prints though, even if it is a Yoda, yet again, as can be seen in the video below: