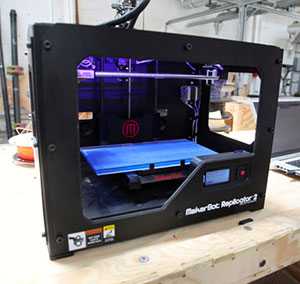 At the end of June, I relayed the frustrated experiences of one 3D printing novice from Geek Dad who, in spite of the miracle of 3D printing an object on demand, didn’t see the technology really reaching mass appeal at its current stage of development.  Based on his use of the 3D Systems Cube, Dad thought that 3D printing was too expensive, took too long, and yielded unpolished results.  As if in answer to Dad’s frustration, Signe Brewster at GigOM has described her first exposure to a 3D printer as something of wonder and joy.

In her visit to TechShop in San Francisco, Signe asks the question, “how far do we have to go before 3D printers are easy enough to use that anyone can own one?” The Maker space, along with its CNC machines and laser cutters, uses a Makerbot Replicator 2 for its making needs and the space’s Autodesk program manager, Jesse Harrington Au, helps her through the process of performing her first model design and print. 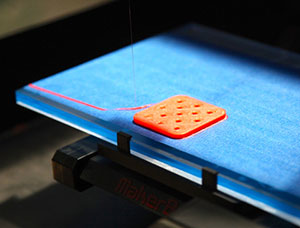 After about a half hour tooling around with the free Autodesk 123D Design, using Jesse as training wheels, Signe had a simple 3D model ready to be processed by the Replicator 2.  Jesse pointed out the different settings of their slicer program, explaining how the fill and resolution can be changed to create a less refined, less dense object in a shorter period of time.  With their first go at printing, due to a leveling issue with the machine’s platform, the object wasn’t printing fully.  Jesse, however, identified and quickly solved the problem and, after 16 minutes, Signe had her GigOM logo.

Compared to Dad’s experiences, Signe describes her experience as relatively quick and painless.  More importantly, using the printer, she seems to revisit a joy felt when she first created an injection molded toy car in middle school shop class:

The pellets liquefied and oozed into the mold, then solidified again. We split apart the mold and pulled out our creation: a blue plastic car.

Something about the experience really affected me. I have long forgotten what happened to that car, but I never forgot what it felt like to hold it in my hand. I had been a consumer my whole life, but in that second, I was a maker.

So, what’s different about Dad’s first go and Signe’s? There are a few things that can be tied to the culture wrapped around the 3D Systems Cube that Dad used and the Makerbot Replicator 2 that Signe used.

Regardless of your opinions of either machine, the Cube is being billed as an appliance, something you place next to your computer with which the family can quickly and easily produce a desired object on a lazy Sunday afternoon.  Makerbot, however, is representative of Maker culture, a DIY machine found in community spaces where your fellow Makers will be there to help you up the learning curve of how to use such a miraculous technology.  While 3D Systems holds onto the dying notion of the nuclear family, invented by 1950s America and propagated for the next 60 years through endlessly recycled TV sitcoms, Makerbot[1] represents the return towards community, locally and globally, that’s been made possible by the internet and the increasing awareness that such a community is necessary to human survival.

So, of course Dad didn’t have fun with his Cube. He was sitting alone at home, relying on instruction manuals to get his Cuisinart to work.  Signe, on the other hand, was in a community space where she had other human beings help her understand how to use the machine.  The answer to the question of whether or not the technology will be readily adopted by the mainstream depends on if you think the mainstream has changed since the 1950s.  Are people learning that they need their fellow humans in order to process this progressively complex world? Or are they content with sitting alone in their homes and getting mad at machines that don’t do exactly what they want when they want them to? I think the answer lies in Signe’s final paragraph:

I don’t think 3D printing is for everyone. Like a DSLR camera or a computer, 3D printers take patience to learn. But once you learn them, you’re free to do whatever you want. That was obvious to me from just one use, and enough to convince me I want to get my hands on a 3D printer as often as possible from now on. It’s worth the learning curve. I think the rest of the world will feel that too when they hold their first little blue car.

Her two examples of technologies that aren’t for everyone are digital cameras and computers, which I have never seen anywhere being used by anyone because they’re too difficult to understand. So long, humanity! We’re all doomed to solipsism!

[1] By Makerbot, I don’t mean the actual company that was bought by Stratasys, but the symbol that it represents to consumers and represented to the Maker community before they got big.  When Stratasys bought Makerbot, they also bought the brand, which has become equated with the Maker philosophy, whether or not it actually represents that philosophy.