Over at GeekDad, the Wired spin-off blog devoted to fathers with nerdy inclinations, one dad has written about his experience with the desktop printer from 3D Systems, the Cube. In it, the self-described neophyte explores his new machine and determines whether or not home 3D printing technology is ready for the masses.  His conclusion: not quite.

Brad Moon – or as I will be referring to him from now on, Dad – deconstructs the process of removing his new Cube 3D Printer from its packaging and using it.  At first glance, all appears to be hunky dory.  The Cube is like a cuisinart, a polished and non-threatening device meant to fit in with the rest of the home appliances.  Soon though, imperfections emerge and Dad gets frustrated.

The Cube, though it has its benefits – like a wifi connection and a platform that is relatively easy to level – has a number of drawbacks, Dad finds.  First of all, the cartridges containing the spool of filament are costly and cannot be opened without making them unusable.  Unlike other mainstream printers, like the Replicator 2, Cube users are forced to rely on 3D Systems proprietary cartridges, a move stolen directly from the 2D printer playbook meant to enslave inkjet users to outrageous prices.

Dad is also annoyed with the present state of home 3D printing solutions in terms of cost, the unrefined nature of the final printed object, and the speed of the entire process.  The price of the Cube is $1,299, while the price of a competitor like the Replicator 2 is $2,199, both of which Dad thinks are too high for most consumers. He also didn’t much like the effort it took to transform a fresh print to a smooth and refined object, breaking off support structures and polishing a print. Not to mention that the actual time it took for simple prints, 2 hours, and complex prints, 8 hours, made Dad pretty impatient. And when the extruder would get jammed halfway through, boy did Dad get irked. 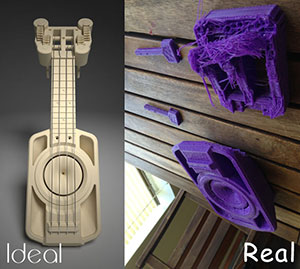 He has some pretty good points. I’ve been making a little progress in learning the way around my Bukobot and, just when I think I’ve got the hang of it, a new problem comes up. Bukobot, a RepRap kit, gives me the freedom to experiment with settings, hardware, and materials in ways that a closed system like the Cube can’t, but I imagine that all low-end printers have issues with print time, refinement, and reproducibility. I just tried to print the Makerlele this weekend. The body looked pretty great, but the insides are filled with support structures, rendering the instrument useless unless I can figure out how to get in there and clear them all out (suggestions welcomed). And when I tried to manufacture the head, the PLA got all tangled up and ruined the print. I’ll be trying to print the head for a third time this weekend. So, Dad might be right. Maybe home 3D printers, at their present state, are only good for hobbyists, people who enjoy the learning curve of working a 3D printer, in which case, if you’re going to be tinkering, why not build one yourself instead of purchasing a plug-n-play with disappointing results?

But unlike Dad, I’m a naive optimist. I think it’s  possible that some of these issues may be addressed in the near future, if not by the Cube, then by other manufacturers. The problem of cost, for instance, might be solved if the Buccaneer fulfills its promise of a $347 price tag. In regards to things like speed and quality, that’s a bit harder to say. The Form1 may be too costly at its price of $3,299 to entice consumers, but is definitely more polished than the Cube. Stratasys could provide suitable competition through a combination of the technology of its new spouse, Objet, and the image of its new mistress, Makerbot, as 3DPI readers discussed in the comments of one article (though the release of an Objet-style desktop printer is still probably not going to happen too soon).

Another possibility is that the minds of consumers will shift from wanting machines that fabricate objects of desire at the drop of a hat to wanting to pursue hobbies, actual activities with values in and of themselves. Instead of instant gratification, they’d prefer to while away their time on this Earth by developing skills and marveling over the miracle that anything exists in the first place, let alone a machine that has the potential to (someday) manufacture anything they ever dreamed. Otherwise, we will find people continuously jaded by life’s imperfections and we will continue to see Dad get mad over the slow evolution of time and progress.