Who doesn’t love a concept car? An auto manufacturer pours money into something they’ll never produce for the public, while proposing technologies that may never be implemented.  Though it’s a work of (almost) pure fiction, it’s hard not to be wowed by the implications of a concept car. The latest from BMW is just about the most futuristic fiction yet, hypothetically making use of augmented reality, 4D printing, and more. 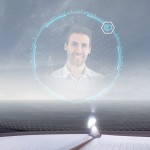 The German manufacturer’s Vision Next 100 is proposed to have two driving modes. The “Boost” mode is basically your typical, manual steering experience we’re all used to (and tired of).  “Ease” mode, however, is meant to be completely autonomous, with the steering wheel retracting and the dashboard shifting, while the front sits tilt toward one another for easier conversation. Augmented reality (just in time for REAL 2016?), is featured in both modes, projecting driving lines, highlighting cars, and providing navigation information in Boost and morphing into a tour guide in Ease mode, displaying recommendations for local attractions and, if the future is anything like today, probably some ads, too.

Like any good car of the future, the Vision Next 100 also has its very own artificial intelligence, The Companion, that learns from a drive’s habits and driving style. In Boost mode, The Companion helps you drive and, in Ease mode, will strike up a conversation with the drive and passengers and will blink at pedestrians as evidence that the car sees them.

The auto would also be 4D printed, with every part functioning right off of the print bed.  This is often envisioned for the future of 3D printing, even by experts like Prof. Hod Lipson.  Rather than 3D print individual parts, to be assembled into a complex, working part, the additive manufacturing machines of the future will combine all of the necessary raw materials – silicon, metal, and more – into the end product.  4D printing, more importantly, represents objects that change with time, once they pop off the printbed.  In the case of the Vision Next 100, BMW imagines the outer shell to transform shape with airflow and wheel arches that flex with steering movement. 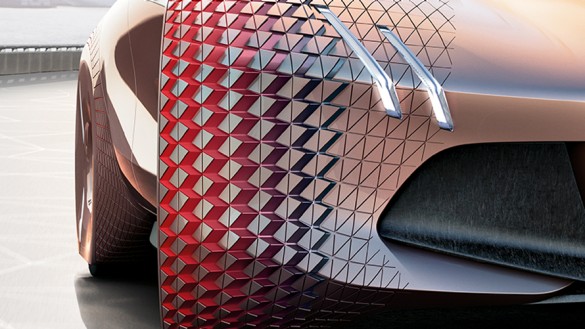 Though it will probably be awhile before BMW actually manufactures something like this – and the world may have radically changed to the point where we no longer need cars by the time it could – all of these hypothetical technologies are pretty plausible.  The HoloLens is shipping to developers this month and seems to be capable of the AR seen in the Vision Next 100; Enterprise In Space partner Value Spring Technology has a functioning AI platform; and Prof. Lipson is already at work on an assembly bot that 3D prints and then assembles an end product.  Now, we just need to see them come together to form what looks like the perfect vehicle.