As Inside 3D Printing hits Mumbai next week, I thought about how India, a country with the world’s second largest population, is taking to this new technology. Particularly since the new Prime Minister, Narendra Modi, has been described as very business friendly, for better or worse, and has laid the groundwork for Western tech companies to capitalize on the large market there, as well as for local business to take advantage of his administration’s policies. So, I turned to the folks at Meckler Media and Inkjet Forum India, who are putting on the event, to connect me with some of the speakers at the upcoming Inside 3D Printing Mumbai. Guruprasad Rao, Director of Technology & Operations at Imaginarium India, and Swapnil Sansare, CEO of Divide By Zero Technologies, were able to paint a very detailed picture of the 3D printing industry in India, as it sits against the larger 3D printing landscape worldwide.

Sansare believed that India is quickly catching up with the rest of the world in terms of developing 3D printing technologies, saying that, “India is growing faster than rest of the world and of course 3D printing is catching up fast. It took a while for Indian industry to realise the importance of 3D printing, but, now, the acceptability has increased multi-fold. There are several 3D printing service providers and manufacturers who are thriving. Yet, made in India metal, ceramic, or glass 3D printers are not yet developed, but that day is not really far. So, we are not lagging behind.”

Rao, however, suggests that, in many mainstream industrial sectors, such as the automotive and jewelry industries, 3D printing is a well-established part of the supply chain. He comments, “The Indian Automotive sector players were first to adopt this technology which helped zip the New Product Development (NPD) life cycles significantly. Jewellery manufacturing is another major industry that has completely integrated technology as part of its process chain. In these areas India is surely at par with the rest of the world.” The rest of the market, he says, is rapidly adopting the technology, thanks in part to low-cost FDM and the media coverage surrounding 3D printing.

But the change that the technology is bringing about is no different to the impact 3D printing is having on countries worldwide. “The trend is very encouraging,” Sansare says. “Amateurs are experimenting with 3D printers for their creativity, taking 3D selfies. Product designers and engineering experts are using it for product prototyping, architects are using these for model making, doctors are using it for pre-operation surgery planning models, chefs are using 3D printers to make chocolates, while fashion designers are making 3D printed garments. So, the revolutionary wave 3D printing in the last 3 years has changed the way we can do day-to-day things.”

While Sansare provides a general view of these impacts, Rao makes a clear distinction between the hype generated around 3D printing and the actual revolutionary aspect of the technology. “The impact of 3D printing is felt in two distinct ways which I like to classify as the ‘Sensational’ and ‘Sense’,” he says. “I think by the sheer prefix of ‘3D’, this technology is generating a lot of buzz amongst the general populace. 3D printing in news can turn heads and start conversations. It has become an attraction not only for the media but also in college festivals, Maker events, and conferences. It’s the hype part of it that makes it SENSATIONAL.”

Rao continues, by underscoring the actual impact that 3D printing is having in a variety of sectors. “The SENSE part, on the other hand, talks about the lifesaving medical cases which are truly revolutionizing the market.” He adds, “To be more specific, I can see three broad areas of its profound influence: 1. Industry involved in new product developments. 2. Design fraternity in development and design communication. 3. Medical community wherein it allows better visualization, planning and delivery of medical care. Education is another area that is waking up to the potential of this technology and is working towards incorporating it in the curriculum as a teaching aid as well asa mandatory skill. Overall, 3D printing is here to stay and is becoming a mainstream process which will most definitely help democratise design and manufacturing, and impact many more industries and lives.”

Because we often cover new desktop FDM printers being introduced by Indian companies, I was particularly interested in the overall presence of technologies other than FDM. Of course, Divide by Zero is the manufacturer of FDM machines, specifically the Accucraft 3D printer. As the CEO of the company, Sansare recognizes that this technology is much more affordable than other processes, but he says, “Each technology has its own advantage. So far, those are slowly getting accepted due to the high cost barrier. But in the future, when the printers and prototype costs will drop, these technologies will also be accepted well. Right now, there are service providers using SLA, DLP, SLS, but very few in DMLS.” 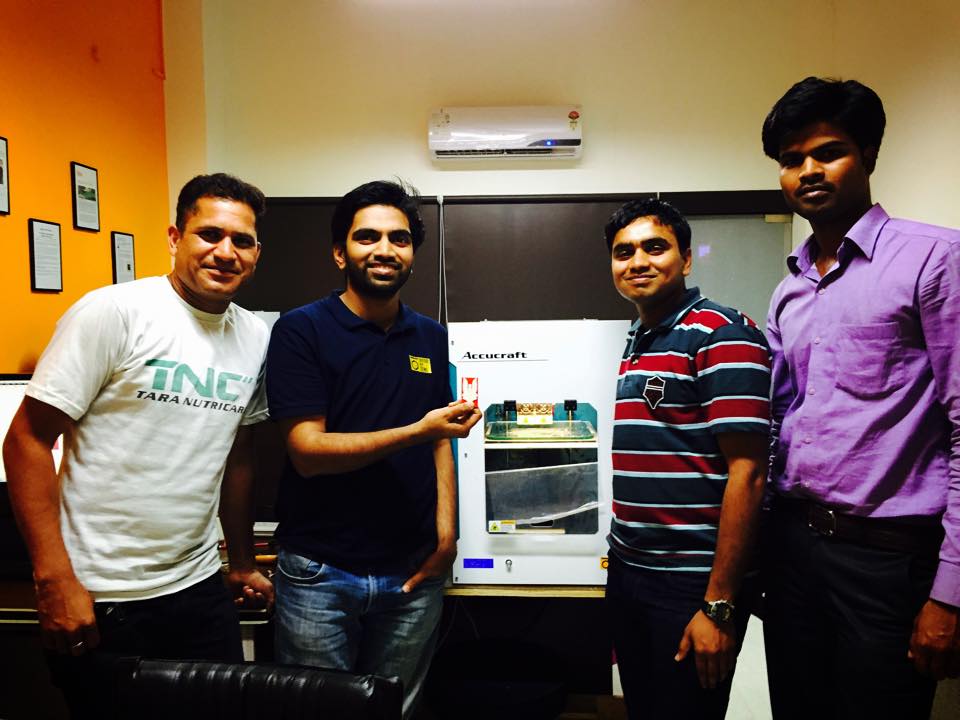 As the largest rapid prototyping and manufacturing service provider in India, Rao’s Imaginarium relies on a wide number of manufacturing processes. Not just FDM, SLS, and SLA, but vacuum casting as well. Still, Rao concurred with Sansare about the relative adoption of each technology in India. He explains, “While the technologies SLA and SLS were first to appear, FDM / FFF was able to grow in South Asian / Indian market due to the low price and better marketing. Even today they remain cheaper as compared to other technologies, both on the initial and running cost. After expiry of the key patents, FFF/FDM became available to anyone, which has led to its further reduction in price and availability as an open source machine. With more patents expiring, more technologies would move into this category.”

Of the other printing processes, Rao adds, “SLA, SLS and DMLS are all excellent production-worthy technologies which help build precise parts due to lower Z-heights. They are expensive as of now, and are growing in essential areas such as aerospace, automotive and medical industries. The game changer for these technologies will be the ability to reliably and efficiently manufacture end usable parts in medium size batches. DLP technology is young, but could be very disruptive. It has 3 main advantages of Price, Precision and Speed. DLP has only one limitation; that is its build size. There has been a rapid increase in the number of new machines using DLP, and we are looking out for the best performers in this space.”

Regardless of the technology, both innovators agree that 3D printing is completely altering the way that companies and individuals are approaching design. “3D printing is acting as a catalyst for innovation. Product development is becoming faster. Hence experimentation is more. This is giving rise to a huge 3D printing service industry. There are service providers from India working for European countries and the Middle East; in the last 2 years, I have seen hundreds of new startups coming up with 3D printing service bureau concepts,” Sansare says. “Also, there are several good 3D printer manufacturers in the market which are delivering high quality products at economic prices. Hence, big, medium and small corporations are buying 3D printers for internal R & D work globally. The market is growing fast.”

Rao contributes, “3D printing is making companies locally more competitive and has helped them to cut down on NPD lead time and time to market. It has catalyzed many startups especially in medical devices to prove their concept and forge ahead with commercialization, sometimes even outpacing the multinationals in offering low cost solutions without compromising on quality. The concept of ‘Design Thinking’ is being applied to every field and 3D printing is an ideal tool to cement and project these ideas, helping them to enter the market sooner.”

He adds that the country has many yet untapped markets that will see new 3D printing solutions pop up, “India is a huge, diverse market place. We have large unexplored markets waiting to be serviced in almost every sector, and the impact of 3D printing on these will be a very interesting journey to study. The world today is a connected network and the effects of these changes in India will have not only an economic impact, but also will bring about a number of lessons for the global community.”

Much of this can be attributed to a combination of the production power that 3D printing brings to any area, as well as the recent explosion of low-cost 3D printers brought about by the RepRap revolution, but, the newer Indian government, led by Prime Minister Modi, I believe, is executing strategies to promote industry in the country. I’ve heard both positive and negative things about the world leader; however, both Rao and Sansare agreed that he has been promoting a new “Make in India” philosophy, emphasizing this industrial growth.

Sansare elaborates, “It is true. They have introduced a lot of new schemes for businesses and ‘Make in India’ thinking is gearing up as an option to China. If we talk about bigger businesses, already FDI has increased considerably. A lot of technology businesses are being supported by VCs and they are growing very fast. But for smaller brick and mortar businesses; we hope to see the change in next 2-3 years. But still we have miles to go.”

Rao goes a bit further, explaining that it is the individuals fulfilling these goals that will truly accelerate innovation in the country, “To extend a quote by one of India’s foremost technocrats, Dr.Raghunath Mashelkar – India got its first freedom – Political freedom in 1947;second: Economic and Trade Freedom in 1991, third: Technological freedom in 2008.
I’d go further to say we got our Freedom to Design and manufacture without constraint in 2014.”

Rao continues, “PM Modi gave a new challenge to every Indian and global citizen– Make In India. This is a loaded goal, for we need to systematically overcome the existing drawbacks and limitations into a culture of World Class Quality! Nothing can change overnight, but the wheels are in motion already. The new government is working towards development and needs time and support. Every Indian should make it his/her personal challenge to make ‘Quality’ a way of life, in every activity we undertake. He has put India on the Global Business Map as a destination for safe investment and growth and we should all make the best out of it.”

While there are certainly areas where the company