3D Print Your Unborn Baby’s Face. Sounds like a quaint collection of essays by David Sedaris, doesn’t it? Actually, it’s a real thing and not just a work of non-fiction.  In an attempt to make childbirth even more terrifying than it already is, Fasotect, the Japanese company that brought you 3D-printed fetuses, is back again with more printed baby goodness. 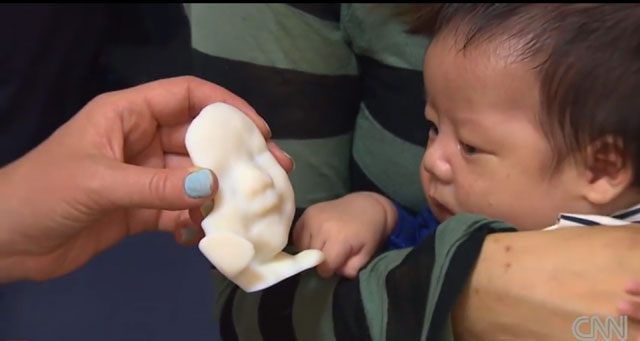 CNN’s Diane Magnay paid a visit to one Japanese couple that had Fasotec print their son’s face just one month before he was born. Using a software called BioTexture, Fasotec technicians were able to create a 3D ultrasound and convert it into a 3D print.

Originally, the company had used MRI scans to capture a fully three-dimensional model of the unborn fetus, but, because of a fear of the possible damage that radiation might do to the mother and child – a small price to pay to know whether your kid’s going to be ugly or not before it’s born – they’ve opted for performing an ultrasound of just the child’s face. The prints, as mentioned in the CNN segment, may not currently offer much of a medical or diagnostic benefit at the moment; however, Fasotec is also in the business of scanning and printing organs and bones, which they believe can act as great educational tools for medical students and provide surgeons with pre-surgical models to prepare them for surgery. Personally, I do believe that this is the likely replacement for prenatal ultrasounds. Not just because I work for a 3D printing blog, but because 3D ultrasounds are already being adopted by forward-thinking hospitals and entrepreneurs, five in the Los Angeles area alone: 3D 4D Ultrasound by 4D Special Delivery, Pic A Boo Baby 3D Ultrasound Studio, Picture An Angel, A Baby Visit of Orange County and Los Angeles, and Bom 3D / 4D Ultrasound Studio.

Watch the CNN segment below. Keep an eye out for the newborn’s older sister who licks the 3D printed face to which Diane reacts with barely audible sound of disgust: