The UK’s Design Museum recently conducted a survey with Ipsos MORI regarding the future of manufacturing, and yielded some interesting results for public awareness, perception and opinion of 3D printing. Perhaps surprisingly, given the extent of the coverage of the technology over the past year in the mass media, a huge 71% say that they have heard little or nothing about 3D printing.

The poll interviewed 994 people, providing a sample of the UK’s attitudes towards this emerging disruptive technology. Some of the data is unsurprising, given how radical the technology is regarding behaviour change for the individual and the mass media sensationalism regarding that gun.

Currently, whilst 3D printing at home remains confined to small ABS and PLA based plastic items via FFF / FDM in the knowledge base of most reporters, let alone audience: I.e. Omitting the range of materials now viable and available for home 3D printing that include wood, brick, high flexible plastic, water soluble plastic, nylon, it may be less surprising that 1 in 5 who say they know the technology currently wish to own a home 3D printer. Or those who are not familiar, that figure drops to just 6%.

I have seen two articles authored on this subject today. They place onus on the 6%. This, positively, shows the publications are not to be prone to hype (pro 3DP hype at least anyway), as we’d of course anticipate that 3D printing publications would go with the 20% figure to induce a wisdom-of-the-crowd instinct towards a fashion to want the technology.

I’m going to be different and look at the stats the opposite way: 20% want to own. The logic behind this is simple: We wouldn’t count the opinions of those who do not know what a car is on whether they would like to own one, especially when cars have just started 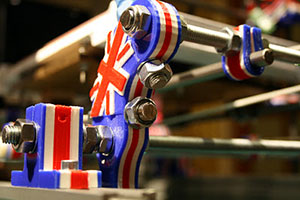 Some of those key statistics and data outcomes from the survey, with link to follow.

71% of people say they know very little or nothing about 3D printers while one in five (19%) say they know at least a fair amount.

Is 3D printing the future of UK manufacturing – or just a fad?

Dispose of or repair?

The future is being able to make everyday objects and spare parts for machines at home – even guns and knives: