Karl Willis, a recent Ph.D. graduate in computational design at Carnegie Mellon, and Andy Wilson, a principal researcher at Microsoft Research, have demonstrated an ingenious tagging technique for 3D print identification, location and more, at SIGGRAPH 2013, the International Conference on Computer Graphics and Interactive Techniques, in Anaheim, California, USA.

The tags, which reside within the internal structure of the fabrication, can be read utilizing an imaging system using terahertz (THz) radiation. The researchers have dubbed this technology ‘InfraStructs.’

“You probably don’t want to have visible bar-codes or QR codes on every object you make,” Willis said. One other alternative, the insertion of a radio frequency identification (RFID) tag into each component, would be a possibility, but one requiring interruption of standard additive processes, increasing time constraints and logistical complexity, thus decreasing production efficiency. 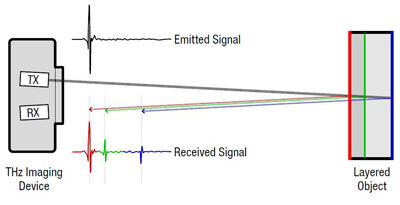 The variable of variability also come into play: Digital fabrication techniques, such as 3D printing and laser cutting, produce subtle, or indeed not-so-subtle, variations. This resultant inconsistency is to some cynics a major obstacle in the widespread adoption of digital fabbing, and an occasional difficulty for the industrial product designer and manufacturer, craft artist or home Maker seeking to produce a series of items with a given level of quality.

This radiation resides on the electromagnetic spectrum between microwaves and infra-red light. It is useful for it’s quality of ability to penetrate many common hydrocarbons, textiles and varieties of paper: but unlike X-rays, does not harm our fragile biological tissues.

Where have you heard of applications of terahertz (THz) radiation previously?

NASA have famously utilized the technology for the process of inspecting the protective tiles on the, now retired, space shuttle.

More R&D is needed before this technique is commercially viable, although the many individuals and institutions caught up in the wave of Intellectual Property concerns regarding counterfeiting of protected 3D files will breath a sign of relief to know that 3D printing looks increasingly unlikely to be a threat to copyright at commercial level?

Open-source enthusiasts may roll their eyes a little at the lengths that those who fear the more controversial disruptive affects of 3D printing will go to, but, perhaps, feel relief that, as awareness of this and other tagging technology becomes commercially available, Makers and sharers will have less to concern regarding the surveillance of big business upon their hobby and craft?