In the US, The Make a Wish foundation grants the wishes of children diagnosed with life-threatening, progressive or degenerative medical conditions. Wade Sharp is one of those children. He has Osteogenesis Imperfecta, a condition better known as brittle bone disease, where the bones of the patient become so fragile, that tragically sometimes even the slightest knock can shatter them.

Because of his condition, Wade can’t join in the usual sports and rough and tumble games that his healthy friends can, so he plays video games to live out his adventures. Wade’s wish was to see how video games are made.

His local Texas, Make a Wish chapter contacted game developers, Robot Entertainment, to make his wish come true. After a few weeks of planning, Wade and his family visited the Robot Entertainment’s offices for a day where he was given the studio tour, had lunch with developers, and learned about the process of video games development. 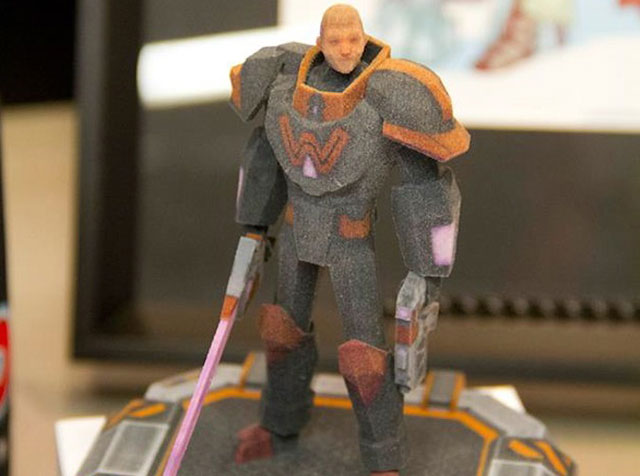 The developers also surprised him by creating an in-game character modeled on Wade himself called ‘Wade the Super-Master’ which he was able to help finish off by picking weapons and colors.

But that wasn’t all… At the end of the fun day, he was presented with a full color 3D-printed sandstone statue of Wade the Super-Master, printed by ever helpful 3D printing marketplace and community Shapeways.

Whilst unfortunately Wade’s condition will not improve, hopefully his 3D model will remind him of his amazing day!

To learn more about Wade’s day check out the developer’s Facebook site here: