Last year, the whole Twittersphere lit up with excitement over the announcement that a team at the University of Washington lead by Amit Bandyopadhyay had created a 3D printer that could use lunar regolith (specifically converting crystalline regolith into nanocrystalline and/or amorphous regolith) as its printing material: making 3D printed moon-bases even more plausible.

Aerojet Rocketdyne have now asked Professor Bandyopadhyay, and Professor Susmita Bose to conduct research into the possibility of 3D printing a micro-satellite from metal and ceramic materials.

Aerojet will assess the success of its partnership with the Professors by the efficiency and durability of the adventurous cutting edge research:

“You can imagine that you want to print an airplane structure, but you have to prove that it’s good,” said Christian Carpenter, program manager at Aerojet, “The pieces have to work every time – and many of them for long periods.”

Aerojet’s end goal is a micro-sat only the size of a coffee-mug, propelled by what will become the world’s smallest liquid rocket engine. 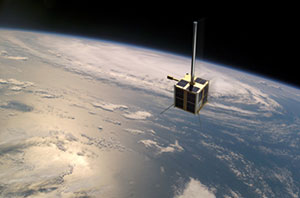 The 3D printing experiment will yield worthwhile results regardless of the success of the outcome, says Carpenter: “Whether the project successfully produces parts or not, we’re going to learn something valuable. I have no doubt that we’re going to find an application for this manufacturing process that provides significant benefit.”

3D printing for, and in, space is becoming an increasingly hot topic, the massive benefits seen in conventional aerospace pointing scientists to the technology as the way forward for a whole host of projects ranging from satellites 3D printed by spiderbots in orbit to asteroid mining, space-station based printers to Laser Sintered rocket jet engine components.