Who said that magic is dead? I didn’t say that. Did you say that? Well, it’s not. The Great Fredini, the self-described “world’s worst magician”, has found a trick that actually works, only he doesn’t have the funds to really bring his show to the public. So Fred has launched a Kickstarter to captivate audiences with the magic of his 3D printing portrait booth, the Coney Island Scan-A-Rama. 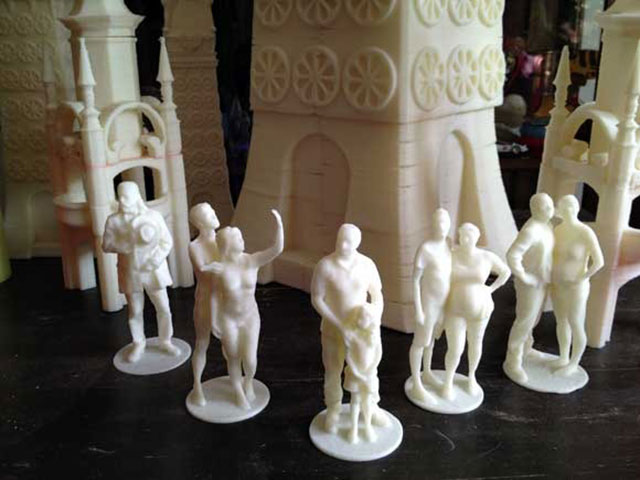 There have been other 3D printing booths that use the Microsoft Kinect’s depth sensor and the model assembly software ReconstructMe to create lifelike 3D prints of patrons, but Fred has a novel approach. Rather than telling his subjects to rotate so as to gather multiple 3D snapshots, he’s built a kinect mount and large-scale turntable for humans called the Scan-O-Tron 3000. They stand on his device, the designs for which will be released to the public at the end of the crowd funding campaign, and it spins them while he obtains a steady and seamless scan. Watch it on the Kickstarter video below:

All of the 3D portraits Fred plans to capture will be featured in a 2014 Coney Island historical art installation, a 3D-printed representation of Coney Island, including historical landmarks, performers, and patrons. This means that, if you get a 3D printed portrait from Fred, you’ll be a part of his installation. 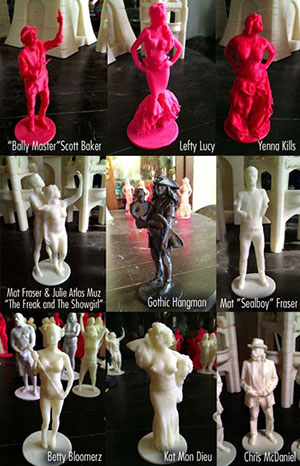 If you back Fred’s Kickstarter, you can get a variety of rewards. For instance, if you happen to be near Coney Island in New York, you can get a print done. Otherwise, you’ll have to choose from one if his preformed 3D-printed “freaks”, like the Gothic Hangman or the “Bally Master”. But, if you truly believe in the project, you can get Fred to travel to you. For $600, Fred will travel to give a lecture at your school or business within 90 minutes of NYC or even farther, if you’ll cover travel costs. And for $3K, Fred will help you host a 3D portrait party with 30 prints for you and your friends.

For those of you unfamiliar with Coney Island, here’s a brief description from Wikipedia:

Coney Island is a residential neighborhood, peninsula and beach on the Atlantic Ocean in southwestern Brooklyn, New York City. The site was formerly an outer barrier island, but became partially connected to the mainland by landfill. The residential portion of the peninsula is a community of 60,000 people in its western part, with Sea Gate to its west, Brighton Beach and Manhattan Beach to its east, and Gravesend to the north.

Coney Island is well known as the site of amusement parks and a seaside resort. The attractions reached their peak during the first half of the 20th century, declining in popularity after World War II and years of neglect. In recent years, the area has seen the opening of MCU Park and has become home to the Brooklyn Cyclones minor league baseball team.

Now, I’ll leave you with this: “Sleep” by Godspeed You Black Emperor!, the most depressing tribute to Coney Island you’ll ever hear.