I’ve always thought that, in order to make consumers adopt more ecologically sustainable purchasing practices, all that corporations would need to do is effectively market sustainable products. They can maintain economic control while still selling stuff that’s good for the environment. If they’re going to shove, say, a new luxury automobile down our throats, why not make it electric (let’s temporarily ignore the stranglehold of the oil companies on global economies and the production of electricity for EVs by coal-fired power plants for a minute)? Just make it hip, cool, and even macho and consumers will want to buy it. CRP Group’s Italian, all-electric “superbike”, Energica, is a perfect example of this marketing. 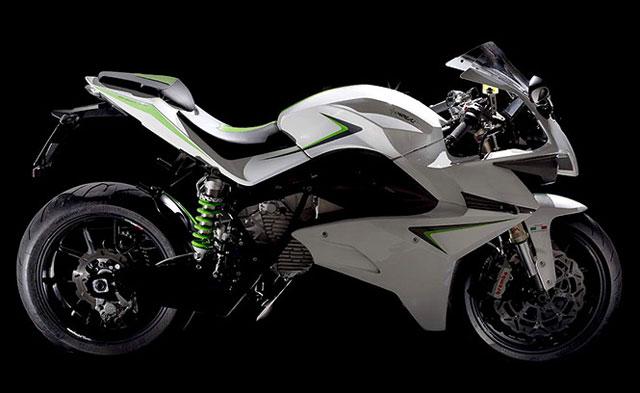 Check it out: a really sweet looking street motorcycle that has the potential to marry ecological sustainability with an image of power and performance.  Energica can travel up to 220 km/h (136 mph) and up to distances of 150 km (93 miles) on a single charge. The luxury motorcycle is made using a combination of CNC milling and 3D printing with Windform, a specially designed material developed by CRP Group.  Windform is a reinforced Polyamide based material that, according to the company that manufactures it, is the “top performing SLS material”. 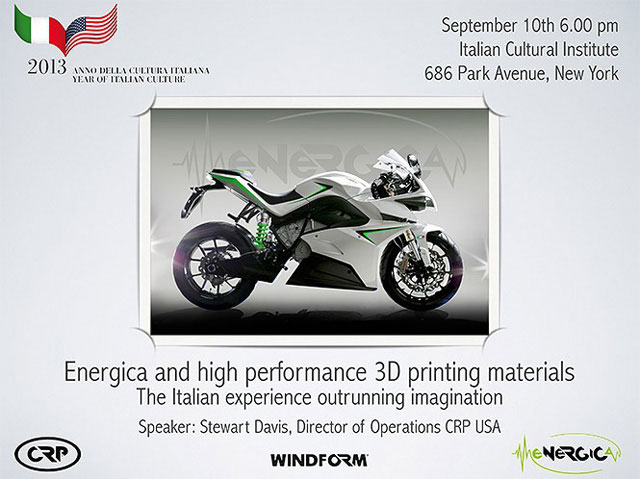 CRP Group will be hosting a workshop entitled “Energica, the first made-in-Italy electric motorcycle, and high performance 3D Printing materials. The Italian experience outrunning imagination” that details the construction of Energica and its laser sintered components as part of a series on Italian culture, called “2013 – Year of Italian Culture in the United States – Italy in US.”  The workshop will be held September 10, 2013 at the Italian Culture Institute of New York.

So it has a nice appearance, but I wonder if it can perform. And, obviously, average consumers can’t afford this thing. But, if CRP and Tesla can make EVs that look cooler than a Ford pickup driving through the mountains, why don’t the major manufacturers sell us Eco-friendly autos? Say an algae biodiesel hybrid? And another thing! If the massive Safeway grocery store chain wants to give movey to prostate cancer research, why are they asking me for a dollar when they could just donate a huge lump sum, which would only be a fraction of their profits, to the Prostate Cancer Foundation? Don’t make me feel like the bad guy when I’m the one that’s broke! And let’s talk about those coal-fired power plants…