The future is a terrifying and/or wonderful place, according to most movies. What will we see? What will we do? What will we eat? Ever since the microwave taught us that not everything we eat has to come directly from nature, we’ve been inventing new ways of preparing foods and objects that Hostess tells us are food. Now that 3D printing has the world enamored, it’s natural that the technology would be used to make food and to make making food easier, or at least weirder. It’s still a very new field, but food 3D printing is super exciting stuff and could, if Star Trek is an accurate depiction of how things will be 2,000 years from now, be the technology used to prepare all of our personally tailored meals. So, let’s run down a list of eleven different food printing machines, people, and organizations that are out there in the world-o-sphere to get a glimpse at the not-too-distant future of food:

1. The ChefJet from 3D Systems 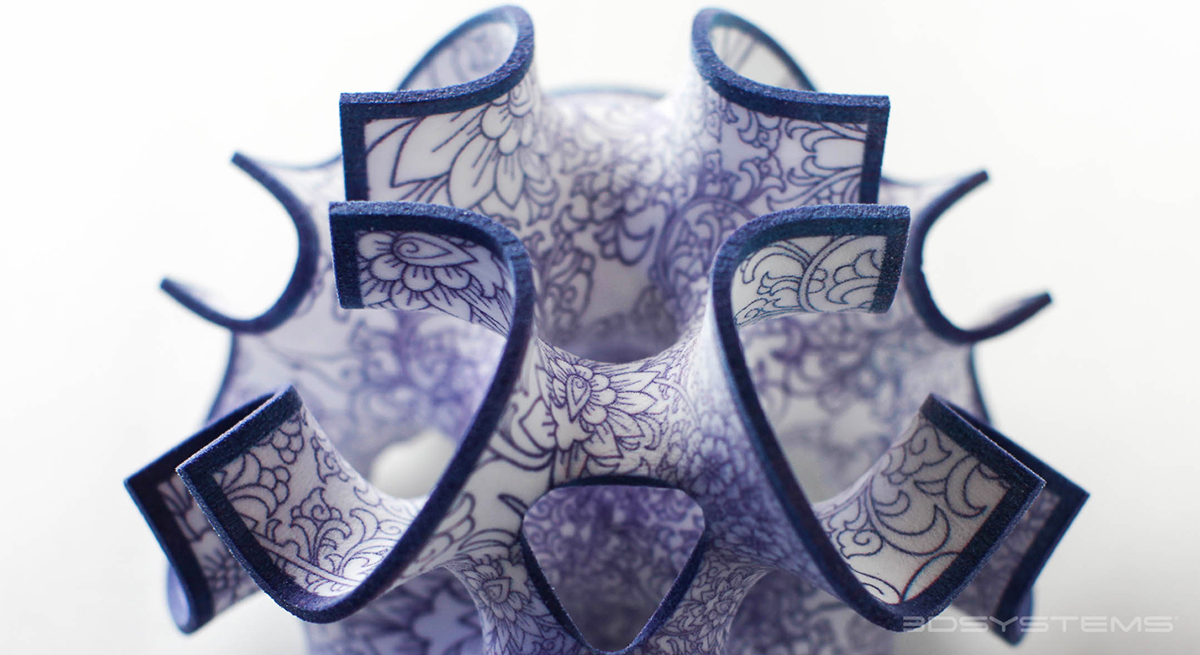 Premiering at International CES this past January, the ChefJet 3D printer has produced some of the most delectable 3D prints I’ve ever seen and they taste almost as good as they look.  The ChefJet was originally developed by a small firm, started by married architects Kyle and Liz von Hasseln, called the Sugar Lab. 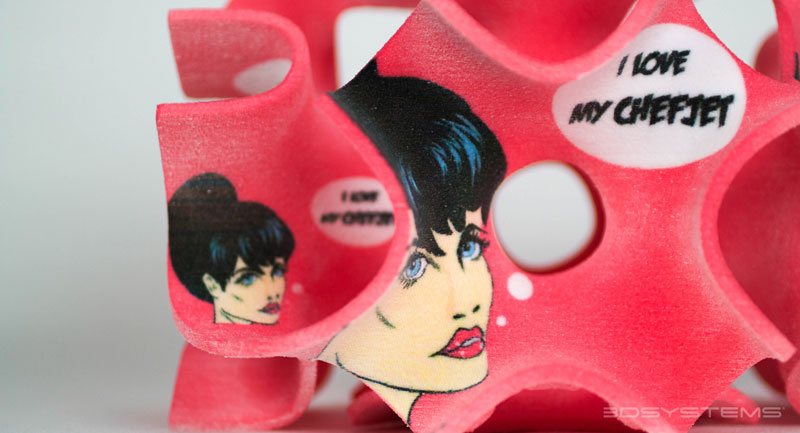 To fill its sweet tooth, 3D Systems purchased the start-up and re-branded their process as the perfect tool for restauranteurs, professional chefs, and decadent consumers wanting to 3D print deliciousness in shapes so beautiful and ornate that you dare not eat them. The ChefJet is meant to come in two varieties, the standard and the pro version, with the ChefJet Pro capable of printing in full color. What’s more, the ChefJet not only prints your ordinary sugar flavor, but can be sweetened with chocolate, sour apple, or pretty much any flavoring you can make in a modern food lab.

Slated “to be available in the second half of 2014” for less than $5,000, according to 3D Systems, the only problem with the ChefJet is that the second half of 2014 is almost over and it still hasn’t been released. Sadly, 3D Systems revealed during their Q3 financial report that many of the printers promised this year were not produced on time, so we may not see the ChefJet outside of expos and blogs until next year.

2. The Foodini from Natural Machines 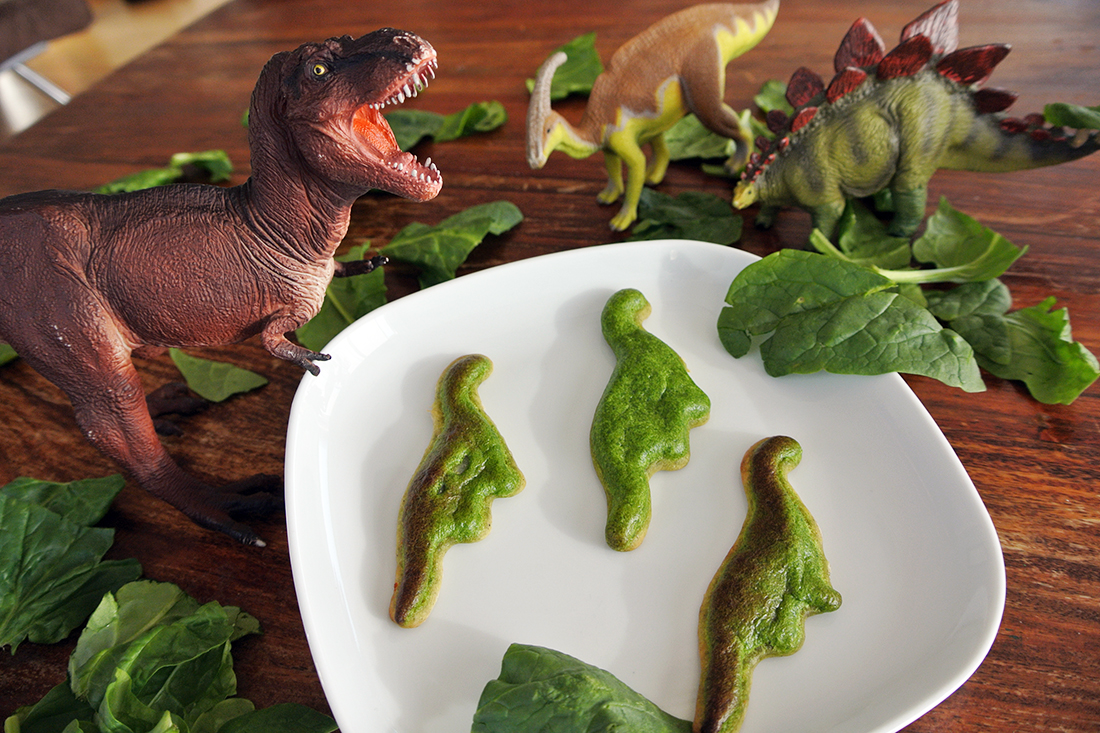 Though this list isn’t meant to be ranked, the Foodini may be tied for first with the ChefJet in terms of catching the public’s eye. With sleek marketing and savory food, the Foodini 3D printer from Natural Machines is meant to be the healthy-minded cook’s answer to pre-made meals. Foodini users can prepare fresh ingredients, create a variety of pastes, and insert them into reusable capsules, which are then 3D printed onto the printbed into any 3D shape. Because the food paste is made fresh, by the user him/her/zirself, the user can choose healthy, organic foods, over processed foods that are chock full of additives. 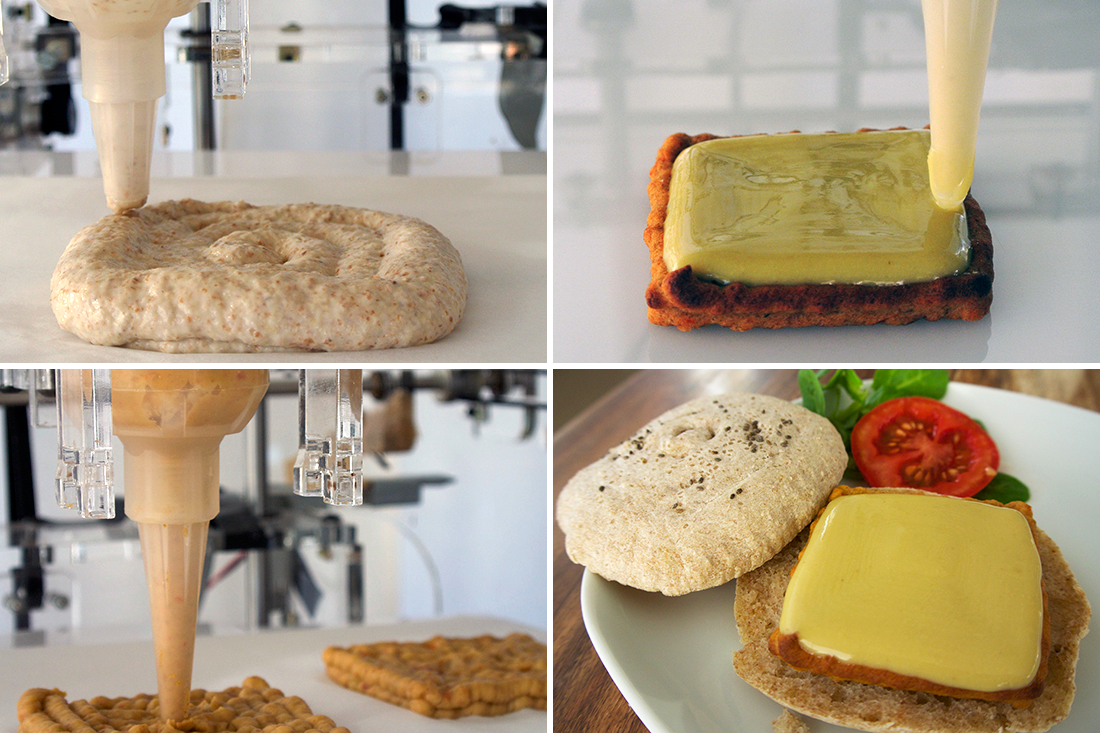 Natural Machines launched a Kickstarter back in March of this year and fell short of its crowdfunding by $20k, which is pretty surprising when Potato Salad earned 554928% of its Kickstarter goal. Knowing a good idea when they’ve found one, Natural Machines isn’t giving up. Instead, they’re completing a round of financing as we speak and plan to mass produce their printers in the second half of 2015 with a retail price of around $1,000. The only thing about the Foodini is that it doesn’t cook the food it prints, so you’ll either have to print food that is edible right out of the syringe-like extruder or cook it afterwards.

3. The f3d 3D printer from Some Smart Kids in England

Which brings me to f3d, a 3D food printing prototype designed by undergraduate students at Imperial College London as a final project, the f3d printer is capable of using up to five different extruders and cooks its food prints using a 1400W halogen oven.  The students were able to print three different ingredients – dough, tomato sauce, and cheese – to cook one dish: a tiny pizza. The total cost of the components was around $1,900.

4. The NASA Food Printer from SMRC

What’s the first thing that most people think of when they think of NASA? Food.  But NASA has been making leaps in food science ever since it brought Tang aboard Friendship 7 in 1962. Some fifty years later, they’re still at it, awarding a $125,000 contract to Systems and Materials Research Corporation in Texas, whose Sr. Mechanical Engineer, Anjan Contractor, is working to build a food printer for astronauts heading to Mars. With raw ingredients in pre-packaged capsules, SMRC’s food printer could combine different individual ingredients to 3D print a wider variety of meals than previously possible with ready-made space foods. The firm has already printed a proof-of-concept pizza that was cooked in just 70 seconds after printing. The next step for SMRC is to infuse their meals with added nutrients, to one day provide Mars colonizers with the vitamins and minerals they need to fight space monsters.  And to print something other than pizza.

5. The Choc Creator from Choc Edge 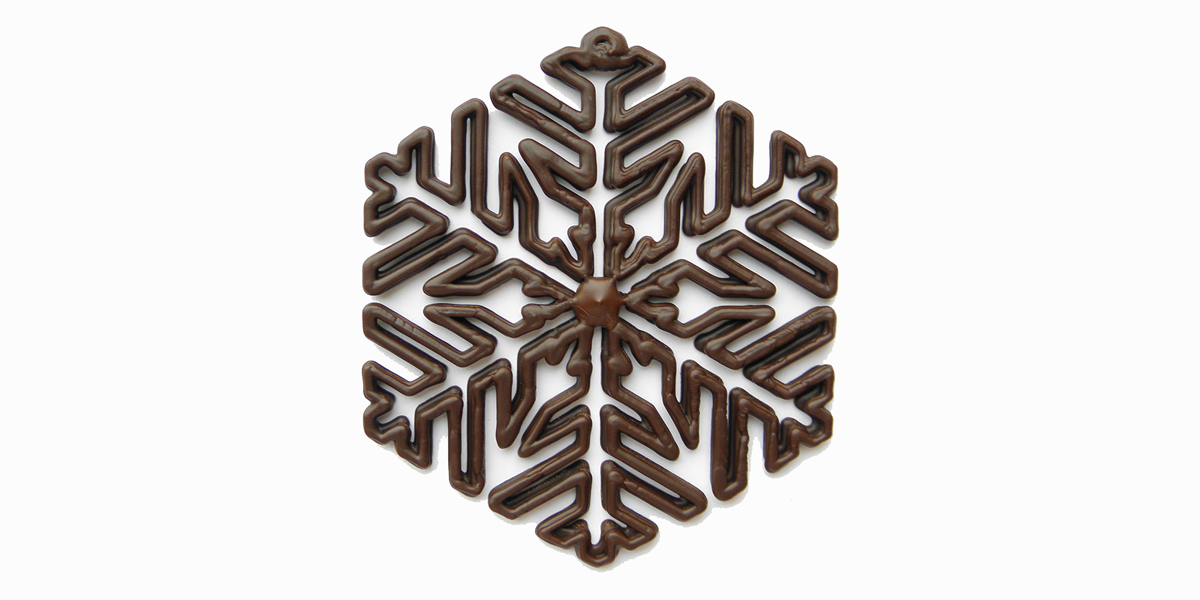 6. The Cake and Chocolate Extruder from ZMorph

As you may have realized by now, food 3D printers aren’t easy to come by. With the exception of the Choc Creator, commercial food 3D printers haven’t really hit the market yet. So, you either have to wait for them to come to you or build them yourself. The next best option may be to purchase an “ordinary” desktop 3D printer and get it to print you something edible. Some printer manufacturers already have that in mind, such as ZMorph, makers of a versatile desktop 3D printer with interchangeable toolheads, including a paste extruder for 3D printing chocolate and cake batter, to pop in the oven for an interestingly shaped cake. 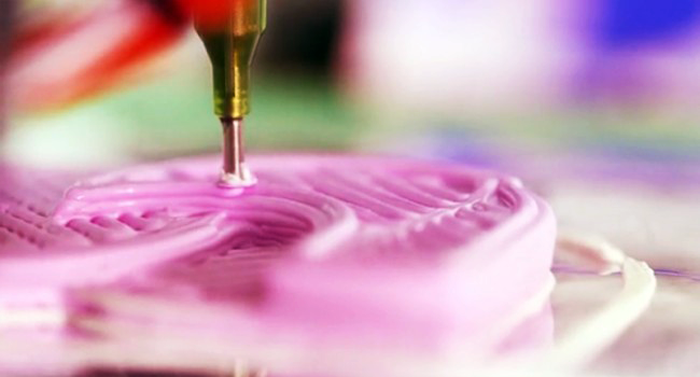 If you’ve already got a 3D printer and want to get food printing quickly, you might consider the Discov3ry extruder from Structur3d, which hasn’t quite made it to e-shelves.  The Discov3ry extruder is a universal paste extruder that successfully launched on Kickstarter to fulfill all of your paste printing needs, such as chocolate, frosting, or other viscous, but less edible materials, like silicone and clay.  Or, if you can’t wait for it to hit e-shelves, you can try building your own universal paste extruder, following Richard “RichRap” Horne’s design or any of the other open source paste extruders floating around out there.

8. The 3D Fruit Printer from Dovetailed 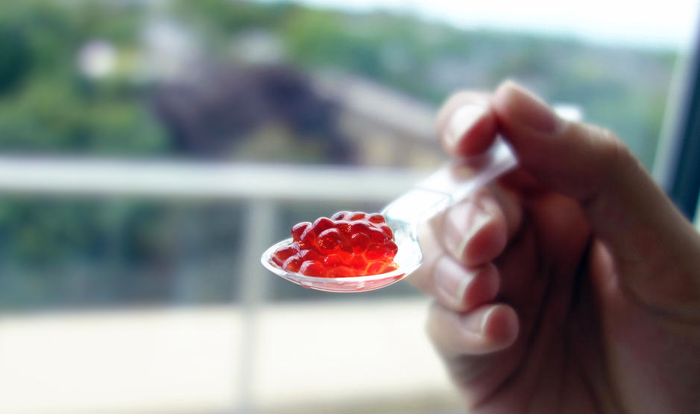 By now, you’re probably thinking, “Mike! Why must I eat paste?!” Alright, Sr. Choosey-Socks. If you don’t like eating paste, you might have to wait for something like the 3D Fruit Printer to show up in your dining room or at your local cafeterium. Using the modernist cooking method of spherification, UX firm Dovetailed was able to combine strawberry flavoring with a sodium rich gel to deposit little spheres into a cold calcium chloride solution to create something that almost, sort of looked like a raspberry. We haven’t heard much from the firm since their initial media flurry and the prints look a bit more like jell-o than real fruit, but it’s an innovative approach to the art of food printing, nonetheless.

9. The 3D Everything Printer from TNO

One organization that seems to be furthest along in food printing may be TNO (or Nederlandse Organisatie voor Toegepast Natuurwetenschappelijk Onderzoek, if you like syllables). This Dutch research group has been researching food printing since 2012 and seems to really look at food printing as an important technological advancement, and not just a kitchen novelty. 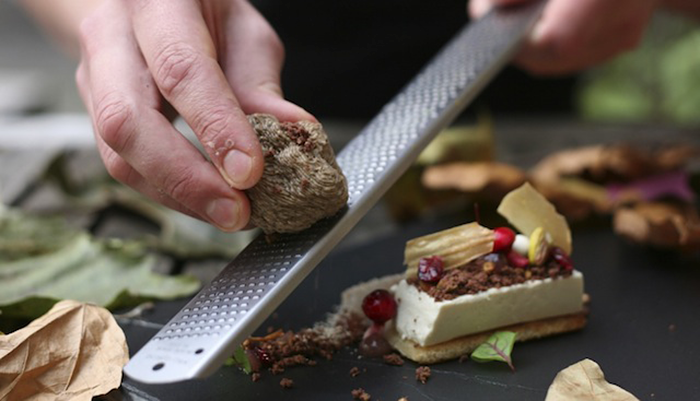 To TNO, food printing could allow humans to 3D print meals specifically tailored to an individual eater. Using historical, physiological data, a food printer could feed you the exact amount of every given nutrient you need, while flavoring your meal based on your mood and using “alternative ingredients such as proteins from algae, beet leaves, or even insects.” 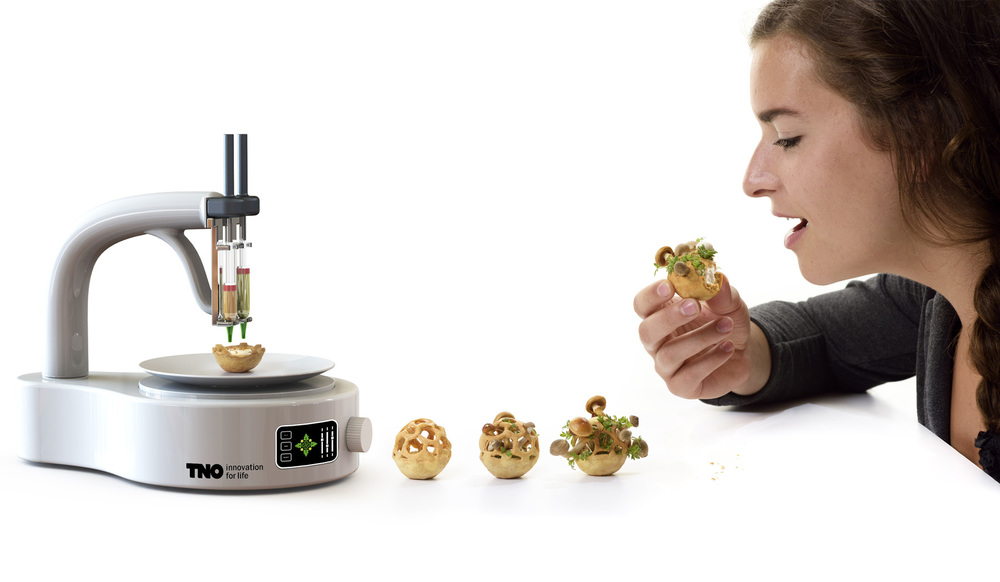 TNO is already working with Barilla to 3D print 15-20 pieces of custom pasta every two minutes. They’ve also teamed with designer Chloé Rutzerveld to 3D print biscuits made of dried fruits, vegetables, nuts or algae and filled with yeast, bacteria, fungi, seeds and sprouts, which grow and flavor the biscuits over time. Yummy! 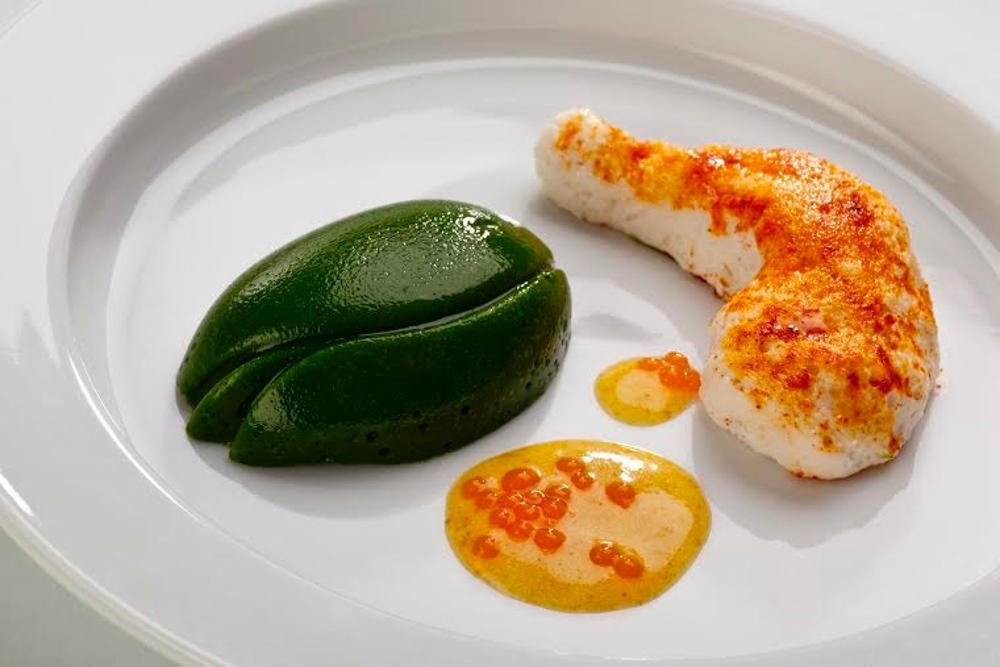 With luck, there’s one company whose technology you may not see for quite some time, if you’re under the age of sixty. Germany-based Biozoon has prided itself on forming palatable shapes from nutritious mush for some time, specifically for the elderly residents of nursing homes.  With funding from the EU, Biozoon will be finishing a food 3D printer by 2015.  Using 48 nozzles, liquified food, and a gelling agent, their machine will recreate the shape and taste of something tough to swallow, like a chicken wing, but that melts in the mouths of old folks, all while feeding them the nutrients necessary to maintain their health.  Soylent green is made of gelling agent! 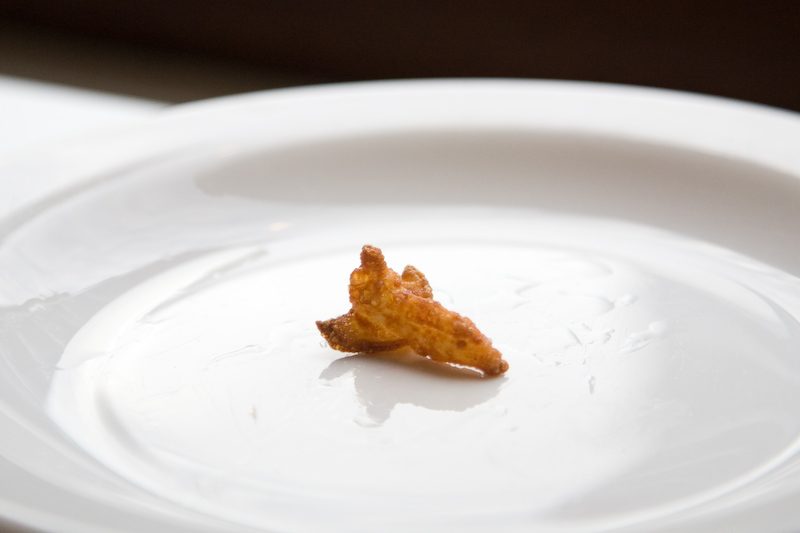 It’s possible that none of these food printing technologies would exist without [email protected], one of the two original open source 3D printers that kicked off this whole desktop 3D printing trend.  Led by Hod Lipson and Evan Malone at Cornell University, the [email protected] printer was an experiment in bringing rapid prototyping to ordinary people at a low cost, with all of the instructions to build one available online.  Since at least 2010, their lab, along with partners at places like the French Culinary Institute, was one of the first to start experimenting with food extrusion: 3D printing cookies with letters baked inside, scallops shaped like rocket ships, chocolate, frosting, cheese, turkey paste, and more. Without that little rocket scallop, we may have never even seen the likes of 3D printed cake toppers, chicken mush shaped like a chicken wing, or small, bland pizzas.