3D food printing can be a hard concept to wrap your head around. Questions arise, like: what is it exactly that’s being made into 3D dimensions? Does it cook the food? And, most frequently, what’s the point? To begin with, most 3D printed foods are made from a paste. And so far, most 3D food printing experiments don’t cook the food, but extrude it into fun shapes that are subsequently cooked. And the point is still being determined, but the ultimate goal is the ability to tailor foods specifically to your dietary needs.  Eventually, it may be possible to feed your daily biostats to an app that determines what amount of which vitamins and minerals you need to treat or prevent certain health conditions. This data would be sent to a 3D food printer that could prepare your meals with the right ratio of ingredients and, in a severely futuristic world, even alter the taste so that you think you’re getting steak, but really you’re getting steak-like food paste.

That future may not be too far off as entrepreneurs like Natural Machines take to Kickstarter to launch their, now famous, Foodini 3D food printer. This is exciting stuff! Though people have been experimenting with 3D food printing for at least a couple of years – most notably in space – this may be the first commercially available 3D printer for printing savoury foods (the ChefJet sweets 3D printer from 3D Systems is also due to be released this year). And the early bird prices for the Kickstarter aren’t looking so bad for the Foodini. At the time of this writing, they haven’t quite sold out the $999 price for the Foodini, though at the time of this article’s publishing, they may have. Subsequently, it seems that the Foodini will retail at around $3,000 or so. 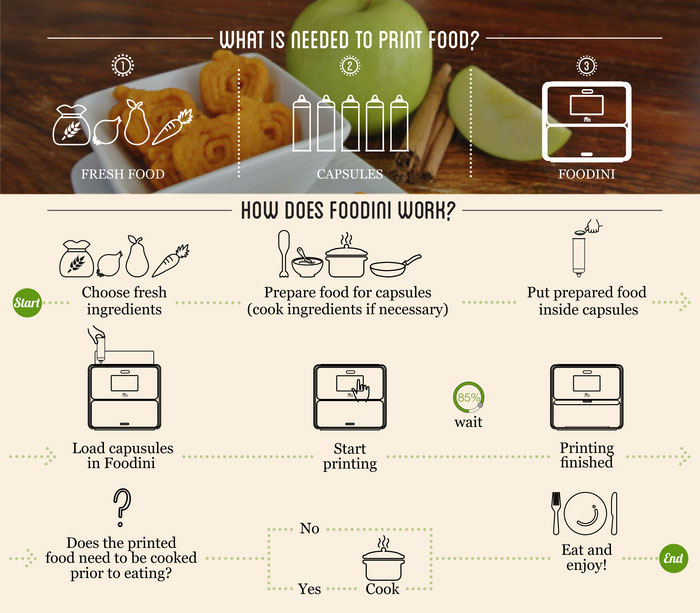 So, how does it work? Well, you donate a certain amount of money to reap KS rewards. Oh! How does the food printer work? You mush up some ingredients into a pasty consistency, shove it into a syringe-like paste extruder, and, voila!, you’re ready to start printing pasty Yodas.  Then, you cook your creation! Unless it’s meant to be served uncooked. The Natural Machines website suggests that this is a way for users to design healthier meals and save time:

Today, too many people eat too much convenience foods, or pre-processed foods, or pre-made meals – many with ingredients that are unidentifiable to the common consumer, versus homemade, healthy foods and snacks. But there is the problem of people not having enough time to make homemade foods from scratch. Enter Foodini. Foodini is a kitchen appliance that takes on the difficult parts of making food that is hard or time consuming to make fully by hand. By 3D printing food, you automate some of the assembly or finishing steps of home cooking, thus making it easier to create freshly made meals and snacks.

Take an example of ravioli. How often have you made homemade ravioli? Rolling out the dough to a thin layer, adding the filling, adding the top layer of dough, and then cutting it to size takes time. Let Foodini do it for you. Simply load the dough and filling into Foodini, and Foodini will print individual raviolis for you. The 3D printing of food – in this case, creating a layer of pasta, a layer of filling, and covering it with a layer of pasta again – is assembling the ravioli. The same as you would do by hand, except Foodini automates it: you don’t have to manually do all the work… Foodini does it for you. Less mess in your kitchen, more time to do other things. Plus, have fun! Make the ravioli into different shapes and sizes. After Foodini is done, put the ravioli in boiling water to cook, or, for a modern twist, bake them in the oven.Or take an example of crunchy, savory snacks: chips, breadsticks, crackers, etc. Don’t buy the prepackage versions that are shelf-stable for years, with preservatives and usually too much salt, etc. With Foodini, you can make your own versions of these convenience foods people have grown accustom to, but creating healthier versions made with fresh ingredients.

I suppose that, because it’s so fun to 3D print stuff, the device would encourage users to cook at home, instead of buying prepackaged meals or eating out. The problem is that, often times, people buy prepackaged stuff because they don’t have time to make their own meals. It’s hard for me to imagine how much more time the Foodini would save the sorts of people who work all day and don’t feel like cooking. To me, at this stage, the Foodini may be better for making cool looking edibles than saving time in the kitchen.  It may actually save a lot of time for gourmet restaurants, such as Dos Cielos, as they prepare their intricately shaped fancy foods for fancy guests. 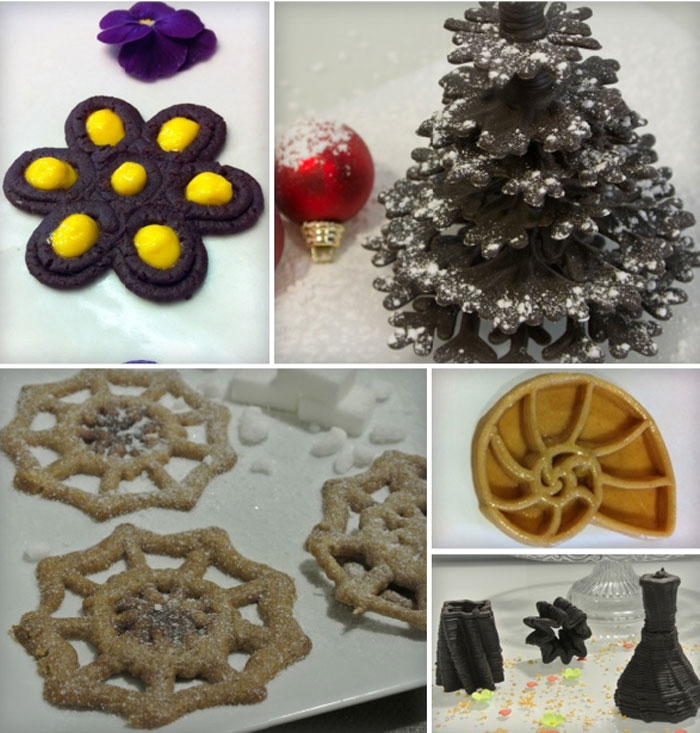 Another neat aspect of the Foodini is that it has a wifi connection and a touchscreen that’s connected to a Foodini community, a thingiverse for foodies where users share recipes and shapes for you to download and try.  The printer can also carry up to five 4.6 oz./123 mL food capsules at once.  Though it will only print from one capsule at a time, the printer will automatically switch between capsules.

If I had the money, I would definitely get one. I may even save up enough to try, but don’t know if there’ll be enough time before the KS ends. Maybe if I come into a lump sum of dough, I’ll be able to buy the Foodini for my savouries and the ChefJet for my sweets. Better yet, maybe Natural Machines and 3D Systems will want to send them over to me to review! Crazier things have happened! Check out the Kickstarter video below!