NASA Contractors Work to Provide World Wide WiFi, Space Station Pizza, and Everything in between

Working with contractors who spoke at the Inside 3D Printing Conference and Expo, NASA hopes to utilize 3D printing technology to deploy wafer satellites and 3D printing stations for manned missions. The hope is to have a tool and part manufacturing station on board manned space endeavours as a safety net and possible organic dispenser for longer missions. Matthew Reyes, the founder of Exploration Solutions, a subcontractor for NASA’s Ames Research Center, addressed the foreseeable potential with onboard 3D printers. He mentioned dilemmas like those faced by the astronauts on Apollo 13 and how a 3D printer would have allowed parts to be produced instead of “cannibalizing” the ship to save the crew. Also, longer missions such as the theoretical trip to Mars requires food that does not lose its nutrients after a certain shelf life, and developments in organic 3D printing may provide options for hungry astronauts looking to touch down on the red planet. Along these lines, Made In Space partnered with NASA’s Marshall Space Flight Center to use their zero gravity 3D printer on the International Space Station (ISS). However, one of the more exciting developments (if printed space pizza wasn’t enough) is the possibility of ubiquitous WiFi thanks to wafer satellites. 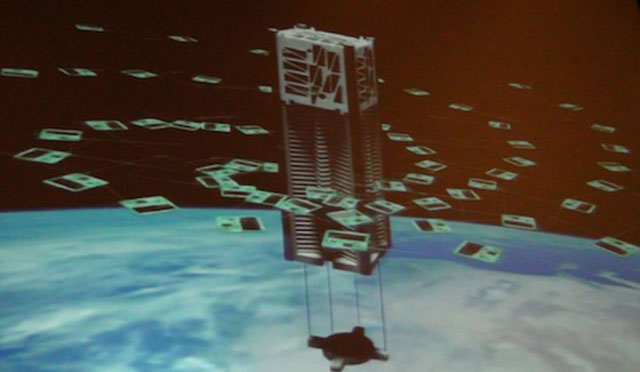 With 3D printed solar wafers emitted from a mothership, the possibility for world-wide WiFi becomes a possibilty. Through research by Filo and Zachary Manchester, a graduate student in Aerospace Engineering at Cornell University, a mechanism deploys the wafer satellites on a level plane in space to collect solar energy while simultaneously transmitting signals to Earth. Up to 300 satellites could be deployed by a single 16” mothership tower. Related by Reyes, the 10 milliwatt satellites would use a CDMA encoding scheme and would be stronger than GPS as it would be closer to cell-phone signals. While still in the Kickstarter phase, this project looks promising.

With internet access at local fast food joints, it is easy to forget how much of the world is without WiFi access. One of the early proposals of the project hinted at free access. This sounds wonderful, hopeful, altruistic for all the right reasons, and I hope it comes to fruition. Every now and then it refreshes the mind, individual and collective, to hear intentions of a ubiquitous and free service. Why not have such dreams connected to NASA, to space among the stars.