Just when you thought that you couldn’t 3D print your own any-shape pasta, spaghetti slinger Barilla has announced plans to put a 3D pasta printer in every restaurant over the course of the next several years. The company has been working for two years with Dutch research organization, TNO, to develop a 3D pasta printer for custom noodle fabrication.

TNO, which also acts as the organization responsible for the Netherlands’ defense research, has been working with 3D printing for many years, including in the field of customizable implants. TNO developed what might be the first process for continuous additive manufacturing with its PrintValley machine, which cycles multiple print beds under multiple heads continuously. The organization also hosts the Penrose open research consortium for industry partners interested in employing 3D printing techniques. Most recently, though, TNO made an impact at Euromold 2013 by putting its 3D printed food objects on display. 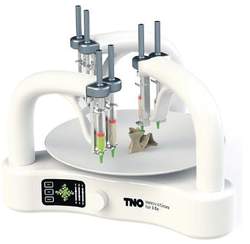 Now, the Dutch organization is working with the world’s top pasta seller to be able to 3D print 15-20 pieces of pasta every two minutes, with TNO’s project leader, Kjeld van Bommel saying that they will be able to accomplish the task: “We are working on improving the speed of the printer. The print speed now is ten times faster than when we started two years ago.” While the pasta printer is in the prototype stages, the eventual goal is for restaurant goers to 3D print custom shapes, as van Bommel explains: “Guests can just bring their own designs. For example, you could surprise your wife with pasta in the shape of a rose for your marriage anniversary. You can simply save your design in a USB and bring it to the restaurant. The 3D food printer there will print it on site.”

Barilla hopes to sell its own dough cartridges, modelling itself after 2D printer businesses, with which the spaghetti can be manufactured.  TNO’s visions of printed food, however, are somewhat more complex. Having already experimented with a variety of AM techniques to produce the stuff, TNO believes that various, healthier ingredients can be incorporated into meals via 3D printing so as to ensure a well-rounded, and ecologically sustainable diet.  Check out the video below:

You can also watch van Bommel describe the ideas in more detail in his TED talk here, including the stereolithography of egg whites and the laser sintering of chocolate:

TNO’s 3D printed future may be a bit more elaborate than just printing pasta at your dinner table, but printed raviolis makes for much better movie montages.