It seems that when 3D Systems’ went early with the Cube 3 announcement yesterday, they were showing the cherry on top before the cake and the icing! Today the company has released more information on the other new consumer-facing 3D printers that it has saved for CES 2014 — with a distinct emphasis on ceramics and food, but with a coup on the “normal” 3D printing front, which I believe, could be huge. And then there’s interesting collaborations and some other hardware too. Coming a month after a dozen industrial focused developments launched at Euromold — the R&D team, as well as the M&A team at 3DS were certainly kept busy through 2013. One senses they’re not going to let up any time soon either.

First the huge coup, which has kind of got lost in the excitement of CES and the sheer volume of announcements, not only from 3D Systems but Makerbot and the other 3D printing companies that are funneling vast amounts of information out of Las Vegas to the world at large. 3D Systems has introduced the CubeJet. Granted it’s not immediately available, with shipping slated for later this year, and there is no clear visibility on specs — I’m sure they’ll come — but it’s hard to over-state what a big deal this is — purely on the premise that the CubeJet is the first consumer 3D printer (under $5000) that utilizes the jetting 3D printing process. Indeed, not just jetting, but colour jetting. THIS.IS.BIG.NEWS!

It may take a while to sink in — it did with me!

In a similar vein, 3D Systems is also using CES 2014 as the launch pad for its ChefJet Series of 3D printers and CeraJet 3D printer.

The ChefJet(s) have been dubbed by 3DS as ‘an entirely new, kitchen-ready 3D printer category for edibles.’ There are two initial printers in the series, suggesting more to come, but these are the monochrome countertop ChefJet 3D printer and the full-colour, larger format ChefJet Pro 3D printer. According to the company, early feedback characterizes ChefJet as the must-have companion for the professional baker, cake master and restaurateur, and usefully, comes equipped with The Digital Cookbook and easy to use ChefJet software for the non-CAD user allowing the ‘production of stunning edible prints to be incorporated into any professional kitchen, effortlessly.’ The ChefJet 3D printer is a monochrome, countertop sized printer with a generous build volume of 8x8x6” and priced under $5,000, while printable materials come in a variety of recipes, including chocolate, vanilla, mint, sour apple, cherry and watermelon. The ChefJet Pro 3D printer, however, again utilizes the jetting process and offers the same recipe materials but it is a full-colour, larger format printer with a build volume of 10x14x8” and will retail around the $10,000 mark. 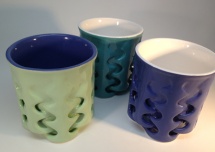 The CeraJet  is a consumer 3D printer that produces ceramic parts ready for firing and glazing. Capable of producing intricate and detailed ceramic objects, again, as the name suggests, utilizing ColorJet Printing (CJP) technology, this printer is being targeted at artists, designers, makers and consumers. Retailing at “under $10,000” it’s not inconceivable that many individuals that work with ceramics will want to explore the possibilities that 3D printing offers.

In other news, 3D Systems is also introducing the Touch, a haptic-based, consumer 3D mouse for intuitive 3D sculpting and design with instant force feedback that mimics the sense of physical sculpting. Priced at $499 and including Cubify Sculpt software, this particular development could well attract quite a lot of attention from the same artists and designers that will be interested in the CeraJet.

And finally, an interesting collaboration that 3D Systems has announced is with Intel Corporation “to mainstream the adoption of 3D scanning and 3D printing.” The premise for this partnership is that 3D Systems will make available its consumer Sense scanning, editing and 3D printing software applications for the Intel-powered Ultrabook, 2 in 1, AIO and tablet devices equipped with the new Intel 3D camera during the second half of 2014. Additionally, 3DS plans to make its 3D scanning technology available to developers as part of Intel’s SDK to make it significantly easier to implement advanced depth sensing capabilities to all kinds of applications. There’s a weird element to this though, namely that “Intel’s perceptual computing platform is based on SoftKinetic’s DepthSense 3D cameras and iisu 3D gesture recognition middleware”, and for anyone that hasn’t put 2 & 2 together — SoftKinetic is the company that announced a similar partnership with MakerBot today.