Makerbot hosted its traditional effusive press conference ahead of the opening day of International CES at 4pm yesterday afternoon, unveiling its new product line. It had been rumoured something big was coming from the NY based 3D printing company, and so it came to pass. As usual, Makerbot surpassed expectations (generally along the lines of “here comes the Replicator 3 with noticeable improvements following the acquisition by Stratasys”) and launched three new 3D printers together with a host of desktop and mobile apps.

Making the point that this is MakerBot’s 5th consecutive year at CES, Bre Pettis, the gregarious host of the press conference, also noted that the company’s first exhibit at CES, back in 2010, featured the only 3D printer at the show. This year however, they are part of a dedicated 3D printing zone with a vastly improved product offering in four short(!) years. 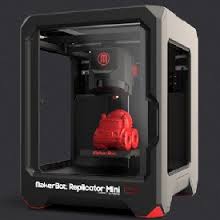 Unveiled one by one, Bre first introduced the world to the MakerBot Replicator Mini billed as a ‘compact 3D Printer that is easy-to-use and just right for smaller spaces such as college dorm rooms, classrooms, multi-workspaces and the home.’ Offering fast and easy One-Touch 3D printing with a maximum build volume of 10.0 x 10 x 12.5 cm (3.9 x 3.9 x 4.9 in), the Makerbot Mini is optimized for speed and MakerBot’s proprietary PLA Filament according to the company, it has a build plate that requires no levelling and produces a default 200-micron layer resolution in prints. Also, believe it or not, Makerbot has trademarked the ‘One-Touch’ phrase — quite why is rather baffling and points to further unfortunate undertones to all the good things Makerbot/Stratasys do and are capable of. But that’s just my humble opinion. Anyway, the MakerBot Replicator Mini’s expected retail price will be $1,375 (compared with the Cube 3’s “under $1000”) with planned availability later this year, around spring time. 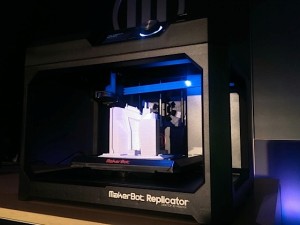 The second reveal was the third iteration of the MakerBot Replicator Desktop 3D Printer. Essentially the Rep 3, but that’s not what they are calling it, however they were highlighting the “unmatched speed, reliability, quality and connectivity for all prosumer 3D printing needs.” This new Replicator has an increased build volume (11% larger than the Rep 2) taking it to 25.2 x 19.9 x 15.0 cm (9.9 x 7.8 x 5.9 in) and prints faster, at 100-micron layer resolution. The MakerBot Replicator is app and cloud enabled, offers USB, ethernet and available Wi-Fi connectivity to ensure a seamless production workflow — this is targeting the designers and people that work with 3D printing as opposed to playing/making/learning with it. Other features include a 3.5-inch full-colour LCD display and intuitive dial; an on-board camera for monitoring and sharing; assisted build-plate levelling; and a new Smart Extruder designed to allow for easy replacement/swaps and detecting filament absence when it will then automatically pause a print without ruining it. Like the mini, this medium sized machine is optimized for MakerBot’s own PLA Filament. The reiteration of “optimized” suggests it does not wholly preclude other materials, but how it affects your warranty should you go down that route needs further investigation. The latest Replicator 3D Printer is available immediately at a retail price of $2,899. 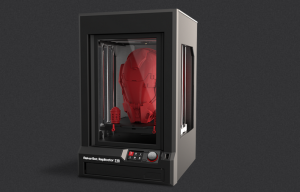 You may have noticed I called the new Desktop Replicator a medium sized machine. That is because the third and final 3D printer in the new MakerBot hardware line-up goes bigger again. In his final reveal Bre uncovered the MakerBot Replicator Z18 3D Printer. As its name suggests it builds up to 18 inches (45.7 cm) in the Z axis, with a square 12 x 12 inch (30.5 x 30.5 cm) build plate. This, Makerbot believes, means that the Z18 offers the best price/performance in its category for printing large industrial prototypes, models and products and/or printing multiple models at once within an enclosed and heated build chamber — courtesy of Stratasys’ R&D and patents. This is kind of what people were expecting for the non-existent “Rep 3” but despite the price/performance marketing line, they obviously can’t justify the economics for including these premium features at the typical Replicator prices yet. The Z18 is coming in at $6,499 and you’ll have to wait until spring to pre-order. No more Mojo I suspect.

After the hardware, MakerBot also announced some new apps, including MakerBot Desktop and MakerBot Mobile, which provide a complete 3D printing solution to discover, manage and share 3D prints – from your desktop computer or a mobile device. This availability to your 3D printing files, accessed via a personal MakerBot Cloud Library, allows users to explore Thingiverse, prepare files for printing, and most importantly, remotely monitor and control a MakerBot Replicator 3D Printer. MakerBot Desktop is expected to be available 3 February 2014, while MakerBot Mobile is expected to be available on IOS in the spring and then on Android later in the year.

Then came the introduction of the MakerBot PrintShop billed as a new model and collection-based offering to provide an easy entry into 3D printing models that can be used for personal use, collecting and giving. MakerBot PrintShop is a tablet-based fun, easy and free way to create and 3D print unique signs, jewellery and much more. No 3D design skills are needed to use MakerBot PrintShop. Users can create and 3D print without a learning curve that often comes with developing 3D design skills, the premise being to make 3D design and 3D printing even easier for everyone. PrintShop works with all MakerBot fifth generation printers and is free to all MakerBot users. This possibly suggests that for anyone with a Rep 2 (or earlier model) it may not work and for anyone with any other type of 3D printer, it may not work and you may need to pay to use it.

Similarly the MakerBot Digital Store has been developed to provide a place that offers original, fun and collectible digital content directly to the end user. The MakerBot Digital Store is only available for the MakerBot fifth generation desktop 3D printers and the MakerBot Replicator 2 (4th generation), with all content being “Makerbot Verified”. It is a place where customers can purchase “high-quality, delightful, printable and paintable digital 3D models and collections” that effectively turns any new or 4th Gen MakerBot Replicator “into an in-home entertainment device and completely redefines the distribution channel: there is no packaging, no shelving requirements, no distributor/retailer mark-up, and the customer can print as many copies from the digital file as they want.” Model pricing is based on individual digital 3D files (.x3g and .makerbot) or by the collection, each can be printed as many times as you want; prices start at $0.99 per file or $9.99 for a collection and are exclusive to the MakerBot Digital Store. Current collections include: Around TownTM, Chunky TrucksTM, The Cosmic CadetsTM, Dragons of GlastonburyTM, Famous FlyersTM and PetPalsTM.

So there we have it — MakeBot’s 2014 revelations for 3D printing. The hardware covers all the bases, but also kind of feels like a step backwards too in some respects targeting different markets with different platforms. However in terms of the “Ecosystem” the company is developing it works; whether it quite “fulfils the vision of a 3D printer for everyone,” as noted by Bre, quite yet, is questionable — both in terms of price, materials and capabilities, but they are certainly still moving in the right direction. And in terms of laying strong foundations with consumers, the Digital Store is inspired, it won’t take off quite yet, it’ll be a slow burn and Thingiverse is likely to dominate the content landscape for a while longer, but I have a suspicion that the DigitalStore, in a couple of years time, will be very significant.