We were somewhere around the Las Vegas Hotel on the edge of the convention when the cold veggie wrap from the hotel lobby began to take hold. I remember saying something like “I feel a bit lightheaded; maybe you should walk ahead of me…” And suddenly there was a terrible roar all around us and the Strip was full of what looked like huge bats, all swooping and screeching and diving around the convention center. And a voice was screaming: “What are these damn animals?” My wife had taken the camera from around her neck and began snapping pictures. “What are you yelling about?” she muttered, staring into the viewfinder. “Never mind,” I said. I pulled out my iPhone, loaded the CES app and began looking for the 3D Printing TechZone. No point mentioning those bats, I thought. The poor bastard will see them soon enough.

It was almost one, and we still had more than a hundred yards to go. They would be tough yards. Very soon, I knew, we would both be completely twisted. But there was no going back, and no time to rest. We would have to ride it out. The exhibition hall presentations and glam-filled press announcements were already underway, and we had to get there by three to sit in on the “Impact of the 3D Printing Revolution” panel, consisting of Conor MacCormack, the CEO of Mcor Technologies; Bre Pettis, CEO of MakerBot; Joel Emans, an IP lawyer; Chris Milnes, inventor of a 3D printed plastic widget for using the Square payment device for iPhones; and led by Sean Captain of TechNewsDaily. A fashionable 3D printing blog had taken care of the reservations… and I was, after all, a professional journalist; so I had an obligation to cover the story, for good or ill. 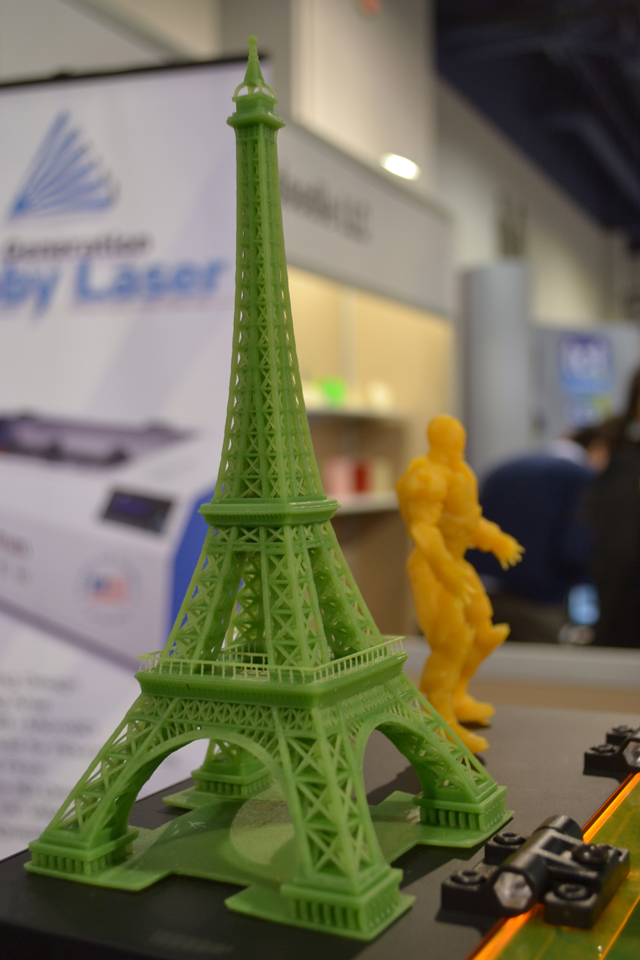 The panel was the sort of stuff you’d expect, hardcore enthusiasts informing the public about the revolution they’d started. Bre asked the crowd, which I’d taken for novices in the field, to raise their hands if they knew someone who owned a 3D printer. He estimated that 60% of the room raised their hands. Just five years ago, MakerBot was the only 3D printer company coming to this CES gig to sport their wares, constantly explaining to the conventioneers what 3D printing was in the first place.  And now – well, now, I’d overheard coventioneers telling him what 3D printing really is and should be.

Some, out in the Exhibition Hall – the TechZone – were already claiming that their machines could print better resolution than the old MakerBot machines could, not having seen what the three new ones could produce. There were new companies in the marketplace working on faster, finer 3D printers. Robox, for instance, was an FFF machine that used two extruder nozzles, one fine and one fast, to print up to 20 microns in resolution. By placing the extruder motor away from the actual print head, the print head zips from one end of the machine to the other before you can say “additive manufacturing.” FSL3D and DWS Lab both intend to beat the other machines with stereolithography technology. FSL3D is like FormLabs’ younger brother, only the two never met and my veggie wrapped brain is telling me that they already hold a grudge. DWS Lab is out of Italy, using a stationary laser with rotating mirrors to outpace its SL competitors. They were selling industrial machines, but plan to move into the consumer market this Spring with a pretty impressive range of materials, including some pseudo ceramic and rubber. 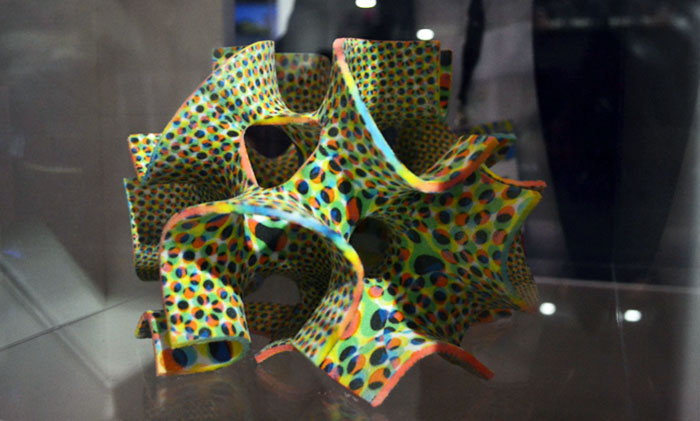 It was clear that things were beginning to change and that the once niche technology would soon be in the hands of the everyday beasts like me. And just when we’d start whining and wheezing that this miracle machine called a 3D printer could only print plastic, some company like 3D Systems would come along and announce a 3D ceramic printer, 3D sugar printers, and a full-colour desktop 3D printer. I was clearly in the midst of a veggie wrap-induced psychosis. Suddenly, the technology had been kicked five years into the future, with all other manufacturers looking like last year’s rubble. The company’s acquisitions in the past year made sense, leaps forward towards the day we’d print the things we wanted and provided Exbits A, B, and C, tangible, tasteable proof that that’s where we’d been heading. 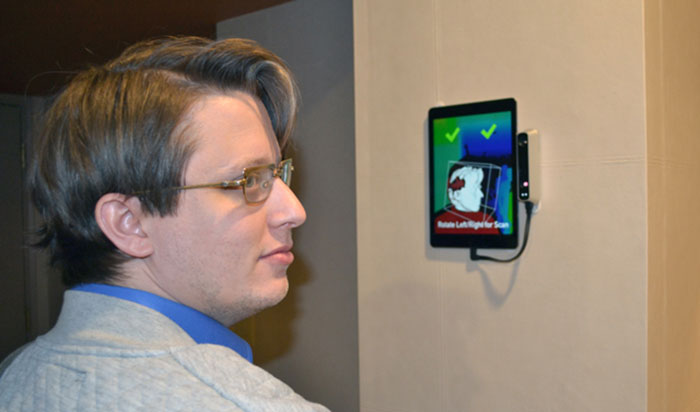 My wife and I met with the Occipital team, the guys who launched the Structure 3D Sensor for iOS. They let us scan the room, play with a virtual kitty cat in an augmented world not unlike Vegas and even show us a glimpse of a future where facial recognition security checkpoints keep us locked in our underground hovels. They just made a deal to sell their tech to 3D Systems as the iSense. After telling us that they planned to establish the 3D app ecosystem, with accessible tech like the iPad to give people a lick of what’s possible and a range of 3D sensing apps, we talked briefly about acquisitions, with them telling me that there were some companies that you’d want to acquire your start-up, who’d give you the fuel to push your ideas forward, and companies who you’d regret being taken over by, who’d squash your dreams and leave them in a back alley in Las Vegas somewhere. Indeed, talking to the couple who ran Sugar Lab in LA, Kyle and Liz von Hasseln, it seemed that 3D Systems was one company you would want to be acquired by. They still have creative control over there, but since the big guys stepped in, they have got the resources to jack up a single-colour sugar printer into a full-colour Willy Wonka machine that can print out a sour apple flavoured Oompa Loompa before the ACLU stepped in to question the ethics of candy modelled after the little bastards. Likewise, Andrew Jeffery, the ceramics man who once ran Figulo, didn’t seem too upset by being taken under the wing of 3D Systems either. 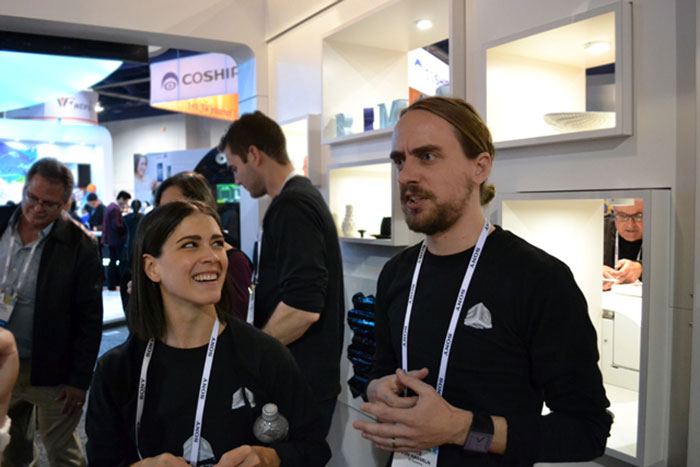 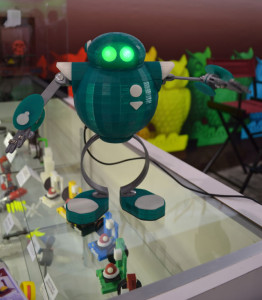 That isn’t to say that the whole scene was 3D printed candy canes.I could sense a competitiveness between the 3D printer companies that was heightened since the other big player had launched a law suit on one of the little guys, but, of course, neither company had any comment on the matter. Afinia, the defendant, didn’t seem disheartened in the slightest though, with team members maintaining an almost cheerful positivity in the light of negative circumstances. Perhaps it’s that unrelenting optimism that makes them some of the nicest guys in the whole 3D printing world. So nice they gave an H-Series 3D printer to an autistic customer, Joey Hudy, at discount so that he could design, print, build, and program the electronics for the sort of robot so cute it made you sick.

Afinia has got more than affability on its side, though. Take a look at their legal filings and you’ll think they have lady justice on their side, too, as twisted as she might be. Not to mention, the rest of the 3D printing community is rooting for them. If they win their battle, they’ll be winning it for all of the FFF manufacturers out there. And Stratasys will find themselves dealing with the rest of competition without the clout of an arsenal of patents, clobbering poor beasts like me just for trying to get up in the morning. Still haven’t made it over to the Stratasys booth yet, so the wife and I will head over there tomorrow. Tomorrow. God, there’s a tomorrow? 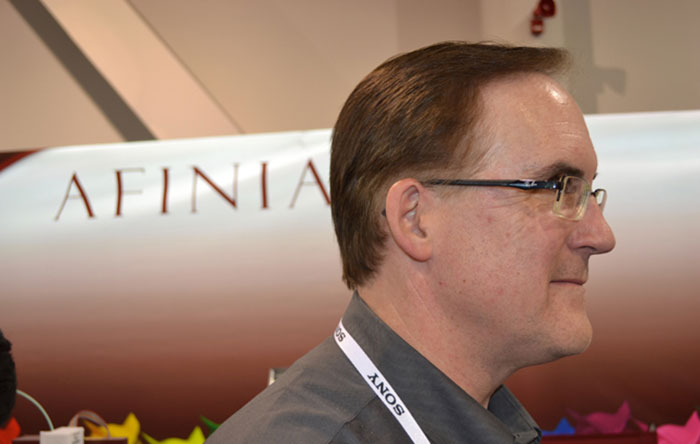 If it comes before death at the hands of a cold veggie wrap, tomorrow will see a conference track devoted to 3D printing titled “Don’t Believe the Hype” and put on by TCT+Personalize. If there’s one thing this city’s got, it’s hype — billboard ads advertising a musical about Pepsi and the last place culture goes before it croaks, starring the death rattle of Shania Twain’s career. Unlike the city, though, below the hype of 3D printing is substance. The panel today reiterated that. And the tomorrow after tomorrow, maybe a thousand tomorrows from now, this world’s going to be different. The IP lawyer, and the others, reiterated that the big companies are going to have to prepare. Instead of making like the old dinosaurs of Hollywood, now petroleum for streaming video subscriptions, they’re going to have to approach the IP infringement that’s likely to take place with 3D printing using a keen eye, a warm embrace and some new economic models.  Because this technology is going to be changing everything. Not just the marketplace, but the minds that are eaten up by it and the minds that do the eating. Or, so help me, Bob Dylan.