South Africa’s House4Hack hackspace may be one of the most inventive hubs around, spurring such truly unique projects as the RepRap Morgan and the RoboHand project. Most recently, the H4H-er that’s caught the Internet’s attention is Hans Fouche. Fouche Chocolates of South Africa employs 3D printing in the most delicious way possible, creating elaborate custom chocolates.

After working in a series of diverse roles, including as a Formula One race engineer, Fouche eventually left a position at the Council for Scientific and Industrial Research[1] in South Africa to pursue his true passion as a chocolatier. As an engineer, Fouche was able to build his own devices to manufacture confections by various means. Rather than purchase a costly peristaltic pump to control the flow of his chocolate, he built one himself, which he can then feed to a customized, 8-headed inkjet printer that has been outfitted to mass produce decorative sweets, such as cupcake toppers. Fouche, who claims that he had first toyed with his own 3D printing invention back in his F1 days, also modified his RepRap Darwin to 3D print chocolate shapes.  The 3D printed pieces you see below were commissioned by Nestle and the Museum of African Design to celebrate the latest Android OS, mostly designed by other artists and printed in Fouche’s garage factory (Source: htxt.africa).

Unfortunately, Fouche tells htxt.africa that he may be getting out of the confectionary business for good due to economic difficulty. Despite some success selling chocolates inscribed with messages, most custom 3D chocolate prints are usually one-offs for specific events and not ordered for mass production.  As a result, he has already removed one dimension from his chocolate octopus printer so that it can only print in 2D and he no longer uses a giant RepRap of his own design to print massive chocolate pieces, instead making moves to venture into plastic home furnishings. Fouche designs his own 3D printing feedstock and has begun testing a new material from a German firm that has more texture than traditional ABS and PLA. He’s used it to build the Chinese-style lantern below, which he believes could sell in the South African home goods market. 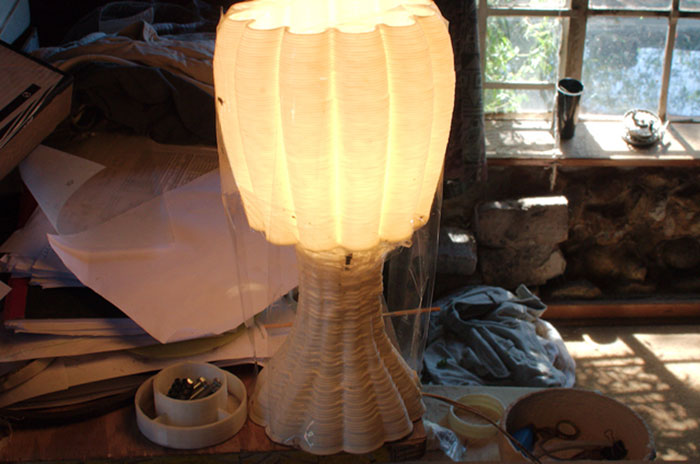 In my opinion, all that’s missing for Fouche Chocolates’ success is a bit more media attention. Since the htxt.africa story on Fouche’s chocolate factory, I’ve seen his 3D chocolate prints everywhere with viewers of his work salivating on their keyboards. If he hangs in there just a little bit longer, I wouldn’t be surprised if a certain CEO of a certain company didn’t swing by South Africa to satisfy his sweet tooth.

[1] Interestingly, CSIR is guiding the country’s national AM efforts, though I’m not sure if Fouche had anything to do with it.