Reprap Morgan in its Natural Habitat

There’s this popular belief, at least where I’m from, that competition and economic incentive drive diversity in the marketplace. What the open source and RepRap movements have continuously shown is that that just isn’t the case. If anything, it seems to me that diversity occurs more quickly and with fewer constraints in the open source community. RepRaps are proliferating in an eclectic assortment that could only be compared with the birds-of-paradise of Papua New Guinea and the RepRap Morgan is a case in point.

In its natural habitat of Johannesburg, South Africa, the RepRap Morgan flashes its brilliant beak of blue and red and sings out its warm and quiet chirp as a call for Makers to come out of their dens and to begin building. The Morgan, built by musical engineer and medical technician Quentin Harley, is a wonderful creature that has the unique ability to print many of the parts necessary to construct a nearly identical offspring. As a means of adaptation, the Morgan is manufactured from cheap hardware that can be found in most local hardware stores. It subsists mostly on vitamins (stepper motors and a microprocessor) and a healthy diet of PLA and ABS plastics.  One can trace its heritage back to the delta-style printer, the Rostock – whose elongated neck allows for great speed and precision during production – and the sturdy Prusa. However, its CNC base, printed frame, and jointed extruder design, as well as its moving printbed, distinguish the Morgan from its metal, rectangular ancestors.

Named after the biologist Thomas Hunt Morgan, famous for studying the genetics of the fruit fly drosophila melanogaster, the Morgan was birthed from a need in its environment for a 3D printer that could survive the harsh South African marketplace, typically only capable of importing RepRaps from abroad or producing printers too costly to thrive. Harley, by listing on his website local South African stores from which to buy the necessary parts, hopes to nurture his creation so that it may populate the landscape. And, by giving away the assembly guide and .stl parts for free, he hopes that RepRap Morgan will be able to make it in environments around the globe. 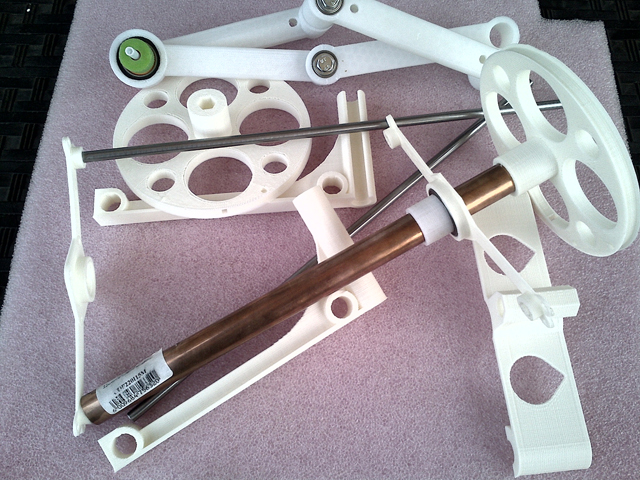 With such an odd appearance, one might ask, “But can the thing reproduce?” After a few years of watching it bloom from a naive infant, to an awkward teen, and, finally, to a fully mature adult, we’ve seen that, yes, the RepRap Morgan can bear fruit. By means of a combined effort between human and machine, Morgan has produced its first child, which Harley is able to monitor (and operate, while at work) from a safe distance, using the BotQueue software created by Zack Smith.