One of 3D Systems’s 12+ CES launches is the new, 3rd iteration of the Cube consumer 3D printer, which has been revealed today — one assumes to get in ahead of the rumoured Makerbot Replicator 3 and get some uninterrupted airtime. The primary point being made here is that the prices are coming down — this 3rd Gen, plug & play consumer 3D printer from 3D Systems is priced under $1,000. The company is also saying it is for everyday use and comes equipped with 3DSystems’ simultaneous multi-material and dual-colour printing capability. So still the material lock-in — there will be complaints on that score no doubt.

Also quoted by 3D Systems for this release — due to ship Q2 this year — are “print speeds that are up to 2X faster than other alternatives, and in expanded, finer resolution print modes and with greater materials selection.”

Of particular note to the consumer market, the Cube meets all IEC 60950 Printer Safety Requirements making it safe for ‘at home’ use by adults and children alike. It’s also much better looking than its predecessors. 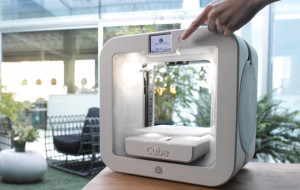 The Cube 3 also comes with advanced mobile printing capabilities through seamless integration with a new Cubify mobile app along with higher speed WIFI and Bluetooth connectivity. Cube 3 features an auto-levelling printpad and easier supports removal for the delivery of more complex prints.

It’s going to be on show at the 2014 International CES in Las Vegas, open to the public from tomorrow through until Friday. And for any press at the show on Wednesday afternoon they can go and see it up close at an event hosted by global entertainer and entrepreneur, will.i.am and 3DS CEO, Avi Reichental, at the Las Vegas Convention Center in the South Hall 3, booth 31424 . will.i.am is certainly no stranger to 3D printing, but his last public demonstration was in his shout video on a Makerbot Rep 2!

What is it with 3D printing companies and one-up-manship!?