I don’t think I can recall having ever met anyone with the combined high levels of grit, determination, optimism and positive mental attitude, even under duress, as that with which Quinn Karaitiana has been blessed.

Anyone that read my review of the Inside 3D Printing event in Singapore may recall that name. At the very end of my stay in Singapore Quinn showed me a prototype of his new 3D printer with a view to launching it at CES. Turns out Quinn is also a bit of a perfectionist and while the plans for rolling out the machine that I saw in Singapore are close to fruition — and will, I believe, blow more than a few minds when it does hit the streets, because it isn’t just about curved edges — the timing of CES was just too soon for launch.

With exhibition space and travel (from Australia) booked for the largest consumer electronics show on earth, instead of cancelling or moaning, while working 18 hour days, Quinn resolved to come up with something else in the interim — something cool that would get people’s attention at the show with the potential to take 3D printing mainstream. Giving up on sleep altogether, his resolution lead him down the route of chocolate! Ok, so 3D printing chocolate has been posited already, usually as a service for consumers, and more recently as a commercial machine for commercial kitchens by 3D Systems.

Chocolate is already mainstream, 3D printing is heading that way. The two together are a near perfect marriage that doesn’t need explanation to the general consumer — they just get it. But they are unlikely to want to pay $40+ for one piece of chocolate or circa $5k for their own chocolate printing machine.

Quinn’s idea — which has been formulated into a prototype in just over a month with the help of an equally enthusiastic industrial designer who has designed products for Breville among other clients — was a consumer chocolate 3D printer for $99. Within this time the two have also planned how and where production — en masse — will be best achieved. Funding is in the pipeline too. 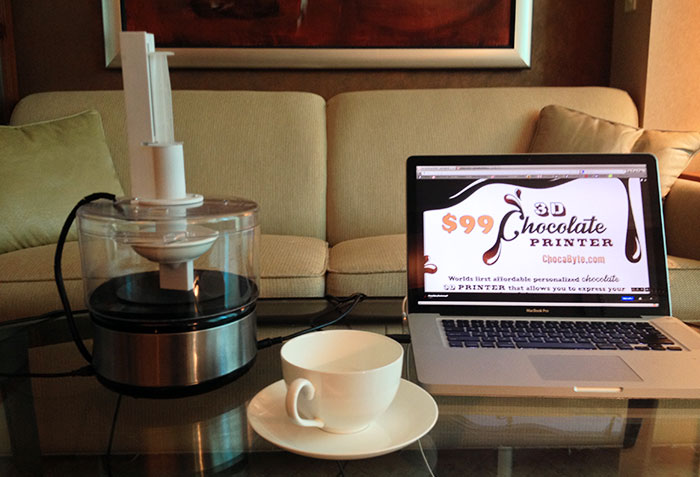 I haven’t told Quinn this, but I’ll put it on record now — I’ll be purchasing one. It’ll be worth the dinner conversations alone, not to mention munching on the results. And even if it doesn’t print perfectly (Quinn assures me it will be good) you don’t have to bin the results, or even recycle them, just eat them anyway. No brainer!

The Chocabyte machine itself has been designed from the ground up — all of the traditional “rules” for building a 3D printer were abandoned to produce a kitchen appliance that happens to print chocolate at a price that will not cause consumers to flinch. But the Chocabyte is to be an inclusive machine — one that consumers will want to buy, without taking out a second mortgage, but because of the way it has been designed, Quinn believes that the maker community will love it, and for that reason he plans on making the design files open source.

The Chocabyte will print custom designs or downloadable designs up to 2 x 2 x 1” and work with chocolate cartridges priced at around the $5 mark. The premise is you simply heat the chocolate cartridge in the microwave or hot water and then place it into the printer and press start. A hard chocolate print is then produced in less than 10 minutes, and ready to eat instantly.

The concept Chocabyte is at CES today. Definitely one to check out. 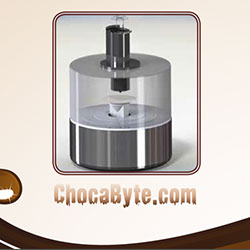