The biggest 3D printing star at CES 2015 – apart from Voxel8’s electronics 3D printer – wasn’t actually 3D printing.  It was  Mixed Reality/Reality Computing/Blended Reality/the Digital Thread.  All of these terms – used by Microsoft, Autodesk, HP, and 3D Systems respectively – represent an era in which the virtual world of games and 3D design blend seamlessly with the physical world.  Items modified on the computer can be brought into the real world with 3D printing, and physical objects can be made digital through 3D scanning.  Users can interact with digital environments as they would in their physical lives, using haptic devices and virtual reality headsets.  So, below, are the top Mixed Reality products and stories to have come out of CES 2015. 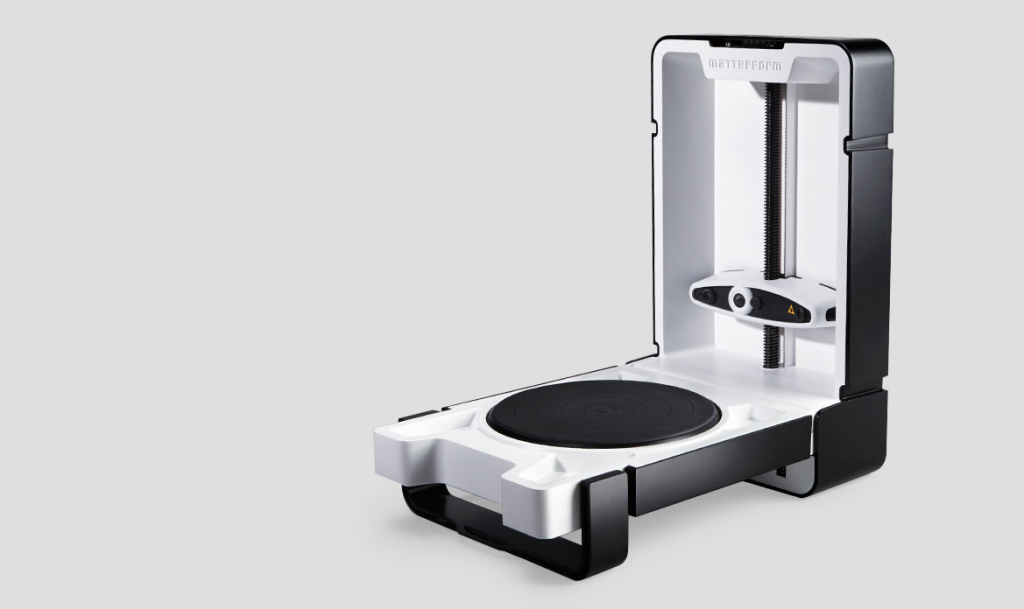 At CES this year, the MakerBot Digitizer was challenged by two new desktop 3D scanners: the Matter and Form scanner and the Ciclop.  We previously reported on Matter and Form, when they successfully completed an Indiegogo campaign for their ~$579 desktop scanner.  Unlike its competitors, the Ciclop rotary scanner, from Spanish firm bq, is open source and 3D printable, allowing those with the know-how to build their own at home.  Such scanners will be able to capture real world objects to be used in games and digital design tools or physically copied via 3D printing.  The Matter and Form scanner, for instance, is already being used to scan rocks for use in an Oculus Rift game called iO Moon. 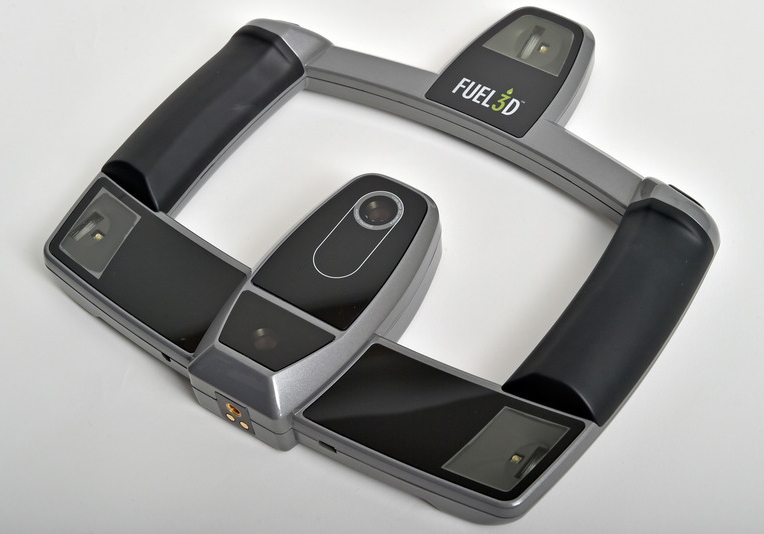 Fuel3D’s Scanify scanner was officially made commercially available at CES this year.  This full-color, handheld device  captures high-resolution 3D scans in less than a second.  Users could easily scan their own faces and stitch them onto lifelike avatars in video games.  As a point-and-shoot scanner, it has the potential to make 3D scanning painless for consumers, though it comes with the drawback of taking scans one 3D photo at a time.

3D Systems is no dummy when it comes to the direction that 3D printing and scanning is heading. Their futurist CEO, Avi Reichental, is well aware of Mixed Reality, which he calls the Digital Thread. While simultaneously developing sweet 3D printing and 3D modeling technology, 3D Systems is also hard at work expanding their 3D scanning products and improving the ways that we interact with those scans.

At CES, they announced their Touch haptic stylus, a peripheral that lets 3D designers and gamers feel what they do and feel what they create in the virtual world.  Responding to a user’s pressure, the device pairs perfectly with the Oculus Rift, as demoed with 3DS’ VR game, HapStack.  The device would also do well accompanying 3D Systems’ own VR helmet, released last year. 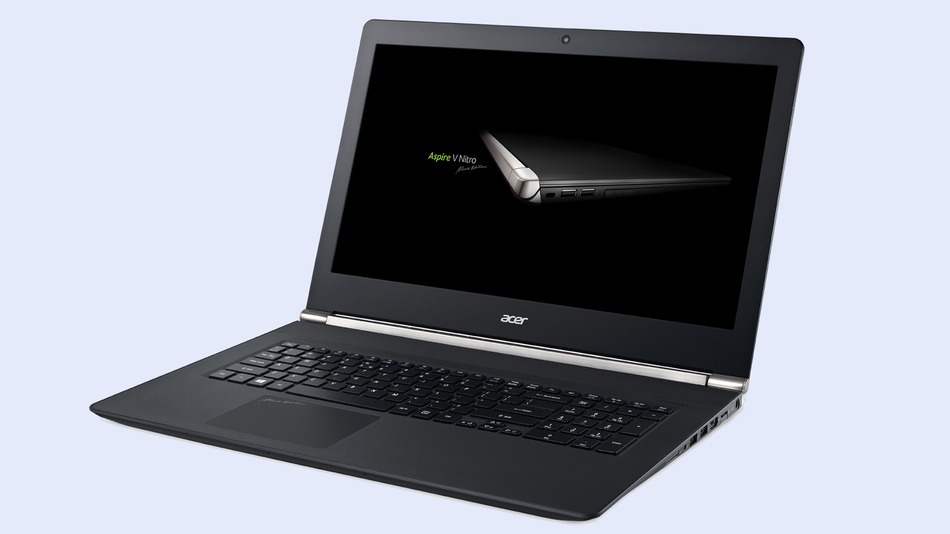 Intel has begun incorporating its RealSense 3D camera into devices this year, with a couple of them showing up in Las Vegas.  It should go without saying, but this is huge.  With the Acer Aspire V 17 Nitro notebook and Lenovo B50 desktop both including these motion-, depth- sensing cameras from Intel, consumers will now have even more access to 3D technology. The uses of the desktop scanners mentioned above can easily be applied to these new computers and, when such 3D cameras are ubiquitously incorporated into computers and handheld devices, those desktop scanners will be obsolete. 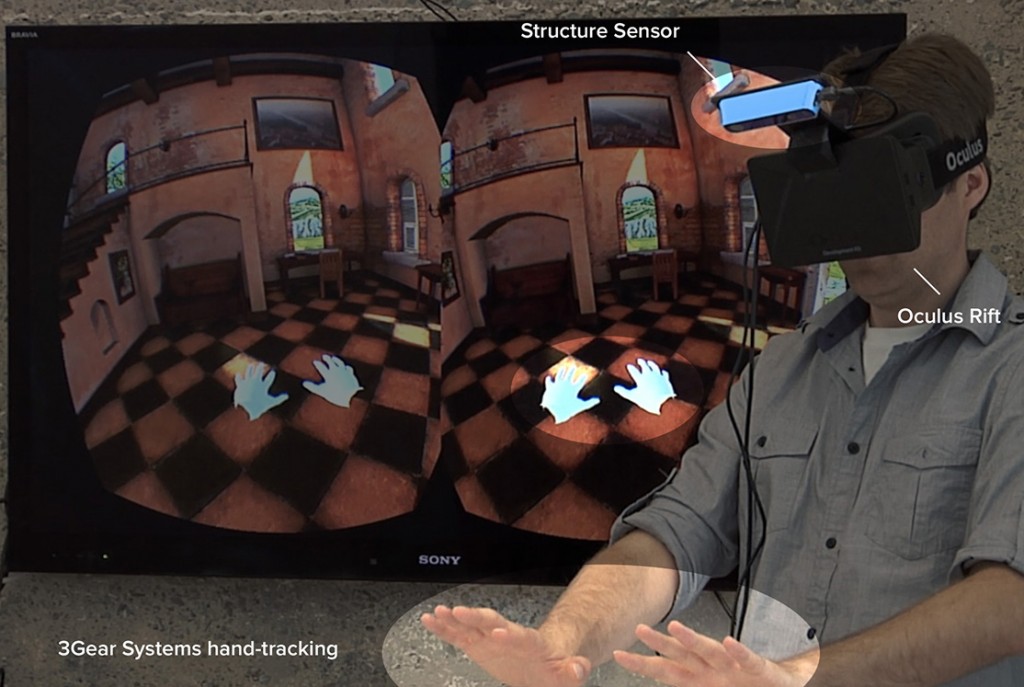 Intel was, in some ways, pushed in this direction by companies like Occipital, which launched the Structure Sensor last year.  The device made a huge splash at CES this year due to its new positional tracking feature.  Using this VR feature, the Occipital booth was turned into an augmented reality playground, in which CES attendees could interact with a complete virtual environment, seen through an iPad equipped with the Structure.  As Occipital pushes the growth of the 3D ecosystem, larger companies are following suit.  HP has already released its Sprout blended reality computer, equipped with a 3D scanner.  Google’s Project Tango will feature 3D scanning as well.

The Oculus Rift is the ultimate symbol for Mixed Reality, kicking off the VR revolution currently taking place.  As a headset that tracks a user’s movements, it encompasses its wearers in an immersive virtual world.  At CES, Oculus unveiled their latest Crescent Bay prototype, which is lighter, has a sharper display, has a faster refresh rate, and positional audio, so that sounds in the virtual world reflect the distance they would in the real world.  After purchasing 3D modeling and movement-tracking firm 13th Lab and hand-tracking start-up Nimble VR, Oculus edges ever closer to Mixed Reality.

The Oculus Rift is not the only VR headset out there, as tech enthusiasts know, but it serves as a paragon for VR headsets, the thing the brain thinks of when it thinks of VR. Outside of 3D printing, the Oculus Rift is being seen as a platform for immersive gaming; interactive, 360 films; and an entirely new way to experience the Internet.  Inside of 3D printing, it isn’t being explored all that much by news outlets and blogs.  Thanks to 3DPI’s Andrew Wheeler, though, I’m beginning to see it as essential for sewing the digital thread, blending the virtual and the physical, and computing our reality into a brave new world.