Last year, we reported that Intel would be incorporating 3D scanning technology into its next generation camera, the Senz3D from Creative.  At that time, the company also mentioned that the camera would be integrated into many of the laptops and notebooks that would be released with Intel technology in 2015.  The first such laptop has been announced at CES this week, the Acer Aspire V 17 Nitro with Intel RealSense 3D.  Immediately jumping into the 3D printing game, the new notebook will be 3D printing ready. 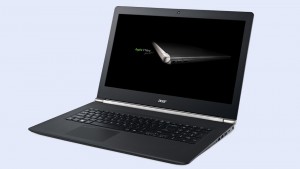 In addition to the ability to work as a webcam, for possible 3D Skyping, the notebook has the ability to scan items in 3D, resulting in a 3D model that can be 3D printed to a connected printer or remote 3D printing service.  Using an infrared light, the scanner pushes us closer to what 3DPI’s Andrew Wheeler and Autodesk refer to as Reality Computing (and HP refers to as hybrid computing), in which items in the real world and the digital world are seamlessly connected.  The scanner bounces its light off of physical objects to render them in a digital space for possible modification or incorporation into virtual/augmented worlds.

The Acer Aspire V 17 Nitro is just the first of a series of devices to use Intel’s RealSense 3D camera this year.  The company also plans to launch tablets and mobile devices featuring the camera, as well.  Though these devices may compete directly with the Structure Sensor from Occipital, which gives 3D vision to iPads and iPhone 6s, it also means that Occipital will have a whole new venue for developing and publishing 3D software, their real goal.  We may even see Intel-baring products implementing the sorts of virtual worlds Occipital is capable of creating.

If you’re unable to see it in person at CES, CNET has a great video covering the new Acer laptop, embedded below: