Just before the holidays, we covered news of a startup that had just received a round of venture capital from Braemer Energy Ventures to develop a very unique product. Details about the product were kept under wraps at that time, but, now, Voxel8 has officially unveiled their multi-material electronics printer, the Voxel8 Developer’s Kit. 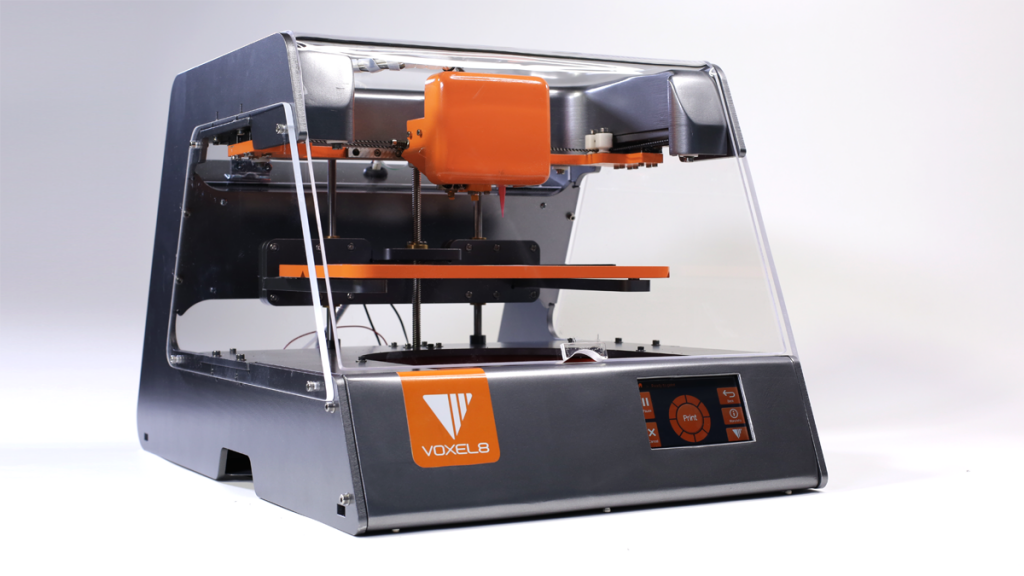 News like this coming from another source might seem like pure pipe dream hype. Voxel8, however, is entirely serious and they’ve got the experience and connections to deliver on their electronics printer. The company is headed by none other than Dr. Jennifer Lewis, a Harvard professor with an enormous portfolio of 3D printing, materials, and electronics research. Her work caught the public’s attention when her previous lab at the University of Illinois at Champaign-Urbana 3D printed a microscopic lithium ion battery.  At that time, many predicted that the battery foreshadowed a future of complex, multi-material parts with built-in electronics. Only a little over a year has passed and that future is already coming to fruition.

The Voxel8 Developer’s Kit is a low-cost 3D printer capable of 3D printing in two materials: PLA and conductive silver ink, with the PLA stored in the base of the printer and the ink located directly in the printhead itself. Sounds simple, but the Developer’s Kit opens up a huge range of possibilities.  With it, the startup has already been able to construct some extremely impressive objects. For instance, at CES, the company will be displaying, alongside their amazing printer, a quadcopter produced almost entirely in one piece from their machine. The PLA and connective circuits of the quadcopter were 3D printed in one go, with the electronics, battery, and motors inserted throughout the printing process.  The benefits of such a process are almost endless. 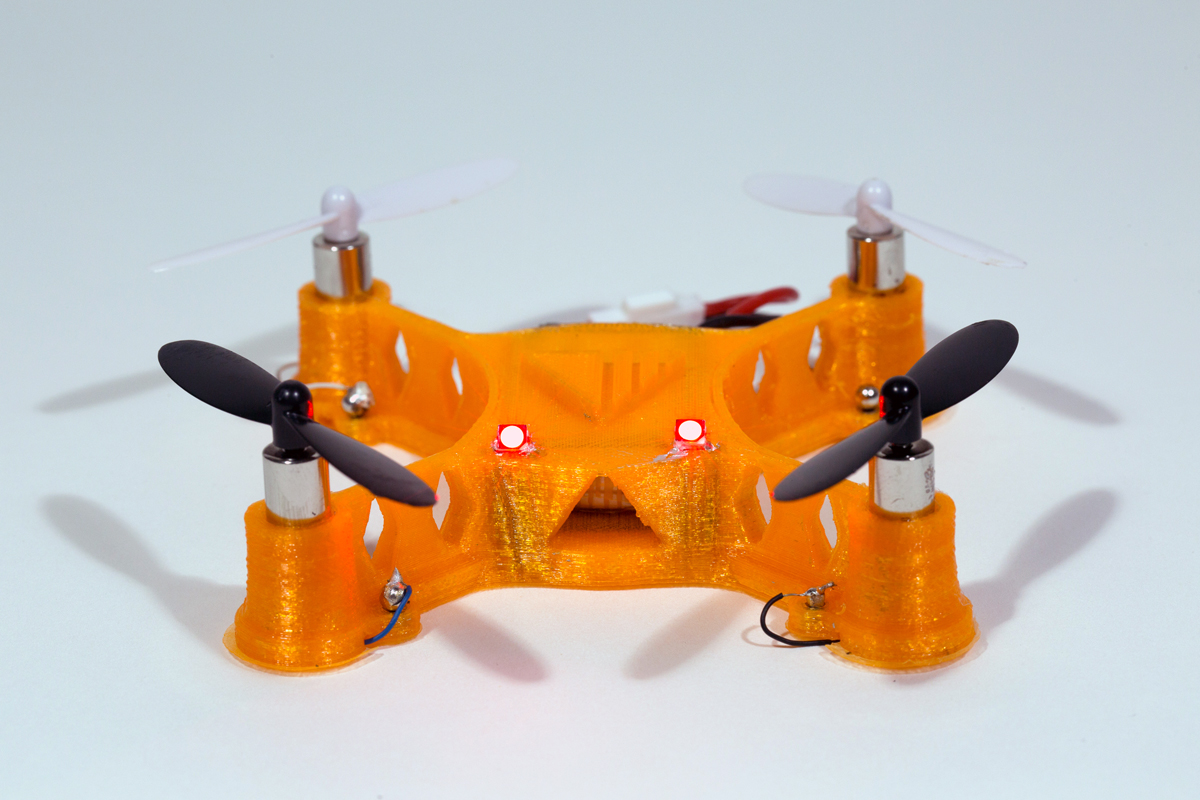 As Voxel8 Business Director, Daniel Oliver, explains, “Effectively, you could build a quadcopter with any geometry you want, stuff it with the components – on the motor- and the board-side – and, basically, have a fully functioning quadcopter without any wiring harnesses.” He continues, “People will also be able to start creating circuits on their desks. So, if you wanted to test out a circuit design, you could print out a circuit board directly on your desk. You’d have to stuff the components in, as you were doing it, but we’ve shown that you can print out what is basically an Arduino board on our printer.”

Not only does this hint at the possibility of, one day, 3D printing complete electronic items in one process, but, more immediately, the design of electronic devices becomes free from the two-dimensional plane of a PCB board. Instead of allowing electronic parts to dictate design, Oliver explains that designs will now dictate the placement of electronic parts. As users model new objects, they can weave their electronics into the design itself, allowing circuits to traverse curves and climb walls. Engineers will no longer need to find a location to situate their circuit boards, but can place them wherever they see fit. 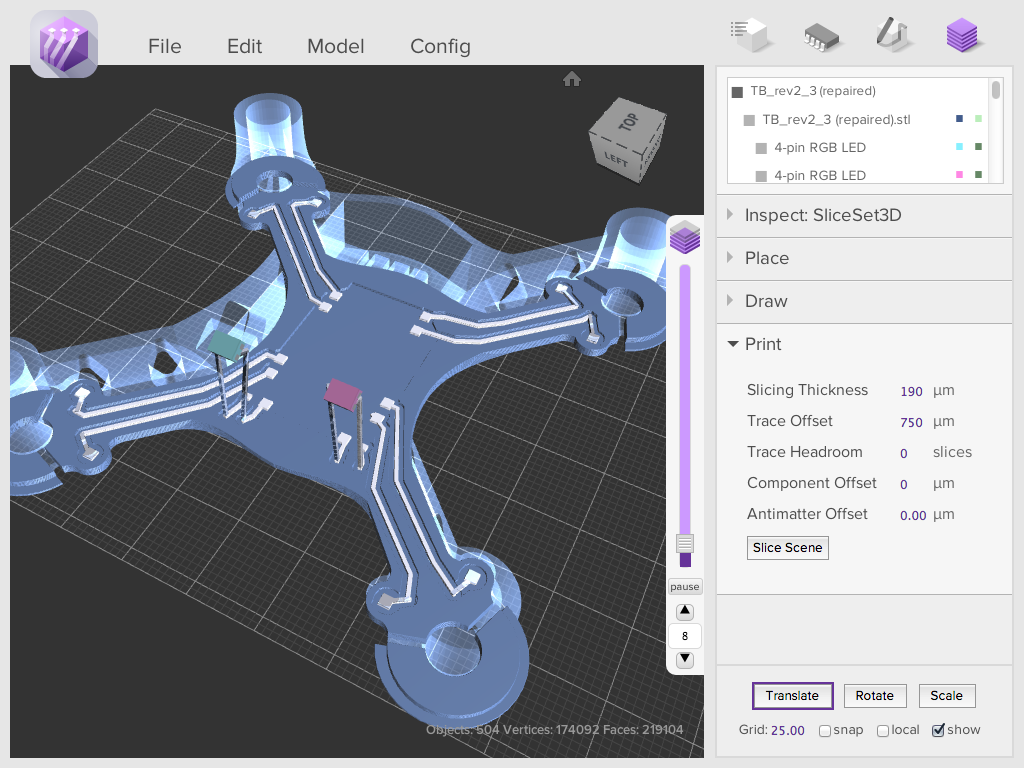 Talking to Daniel, I wondered what the software would look like for such prints, as I wasn’t sure that Slic3r would be quite up to the task. He told me that Voxel8 was already working with Autodesk to design the software for their product.  The “Spark Powered” software, dubbed “Project Wire”, allows users to upload a CAD model and start filling it virtually with electronics and conductive ink. 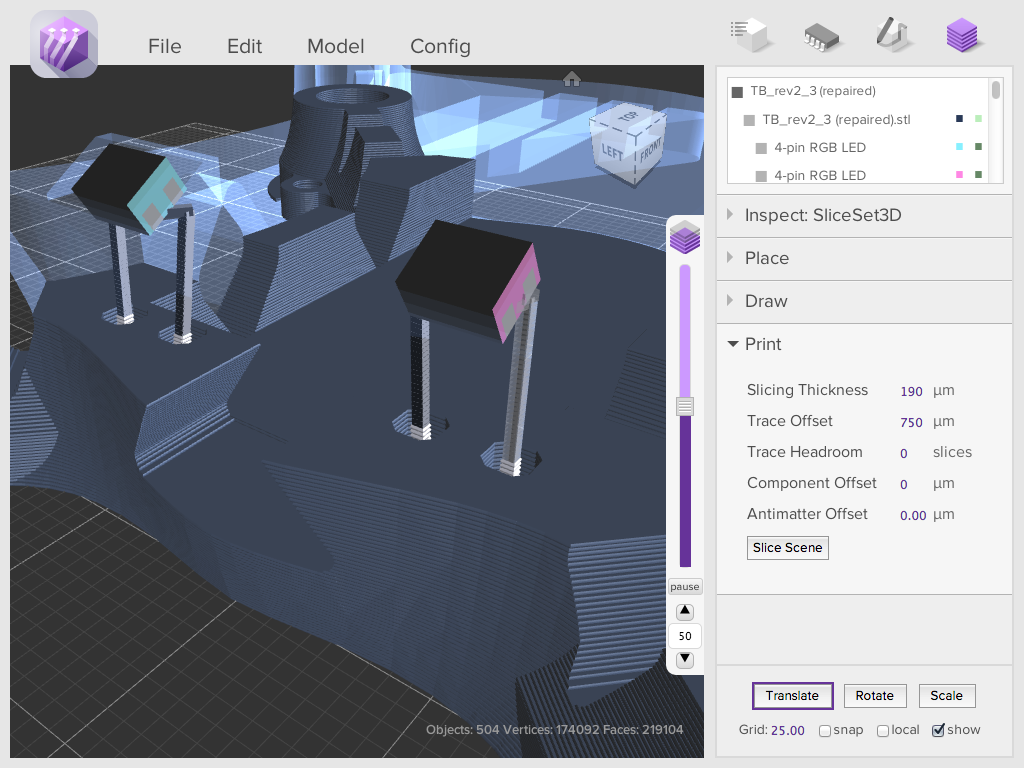 Users drag and drop electric components – like LEDs, chips, and resistors – into their design and draw connections from one piece to the next within layers of their object.  Then, when the machine begins fabricating the item, it pauses for you to place the electronics, and resumes printing.  You can see all of this in the promo video below:

As amazing as all of this is, the Voxel8 Developer’s Kit is only the beginning.  Spun out of Dr. Lewis’s lab, the company has all of the materials research in its arsenal to usher in a whole new era of 3D printing.  Voxel8’s proprietary platform (licensed from Harvard and U of I) is designed to be upgradeable for every new feedstock the company releases in the future.  Though Oliver couldn’t mention exactly which materials these would be, the imagination runs wild with the possibilities of Lewis’s research: lithium ion batteries, lightweight composites, stretchable sensors, solar panels, biosensors.

Dan tells me that the device is geared towards engineers and advanced Makers. Though ordinary consumers may not be producing electronics with it, they could be in the near future as the technology is refined and as consumer culture transitions more completely towards prosumerism. The Developer’s Kit is meant to drive a growing desire for functional, multi-material 3D printing.  Once people begin designing for the Voxel8 platform, the company will be able to push their technology even further – perhaps, to an industrial scale. In the long term, one can imagine industrial printers capable of printing objects with embedded electronics en masse (Project Ara, anyone?). Leveraging Lewis’s bioprinting research, it’s also possible to see a medical-grade version of their machine used in laboratory settings to 3D print multiple types of cellular materials into a single, biological object.  I really believe that there is nothing that she and her team aren’t capable of.

And Autodesk CTO, Jeff Kowalski, seems to agree, saying, “We’re excited to work with companies like Voxel8 because they are really pushing the boundaries of where 3D printing is capable. They’re pushing that front edge, so we can actually start to develop new functionalities using 3D printers – create things that have never been created before – and by incorporating conductive inks directly in the 3D printing process we can start to create things that have functions after they’re created.”

Autodesk isn’t the only impressive partner that Voxel8 has on board. The startup is being advised by John Kawola, the CEO of Harvest Automation Inc. and former CEO of Z Corp – later the VP and GM of Personal and Professional 3D Printers Business Unit at 3D Systems Corp.  Voxel8’s Hardware Lead, Michael Bell, has launched two companies around computer software and battery technology, tech that was later transferred to Google and Tesla Motors.  Bell holds two patents in battery safety research at Tesla and has two more pending in the field of 3D printing electronics, through his research at Harvard.  Alongside Bell and Lewis, the company’s Materials Lead and Software Lead are already members of Lewis’s prestigious lab.  And Dan Oliver is a former systems engineer from Honeywell Aerospace turned Harvard MBA grad.

Now, there are a number of Makers and researchers who have explored the 3D printing of electronic devices. For instance, about two years ago, a group of researchers at the University of Warwick developed a conductive 3D printing material called CarboMorph. And some companies have released conductive filament or printheads for 3D printing electronics, such as RabbitProto, which manufacturers a conductive paste 3D printhead. Voxel8, however, is the first company – that I’m aware of – to release a 3D printer specifically devoted to manufacturing multi-material electronic components.

There ink may be more conductive than other similar materials on the market, but Voxel8’s roster and experience is more than enough to convince me that they represent the future of the industry to come.  To kick that industry off, you can pre-order the Developer’s Kit for $8,999, which includes the printer, software, materials, support, and training.  Pre-ordering also puts you first in line for the printer and gives you premium access to the company’s new materials as they become available.

As you can tell, I’m excited about this thing, but, more than the machine itself, I’m excited to see what people do with it.  3DPI has already covered countless examples of projects that could benefit from 3D printable circuitry: Adafruit’s wearable fitness tracker, the DynePod wearable computer, Disney Research’s printed teddy bear arm, so many quadcopters, bionic prosthetics, just to name a few (too many).  In the coming year(s), we can expect to see a whole new slew of Instructables, Adafruit guides, and prototypes for the future of electronics.  And, after that? Who knows!