Disney Research has come up with a novel 3D printing method that could usher in a new era of scary animatronic bears that come alive in the middle of the night at the edge of your bed. The technique involves an automated needle felting process that yields a 3D felt form that can be combined with embedded electronics or plastic 3D printed parts to create hybrid prints.  The entire 3D felting process is described in a paper written for Siggraph 2014.

The paper describes the work of Scott Hudson and his team at the Human-Computer Interaction Institute at Carnegie Mellon University and Disney Research in Pittsburgh.  Hudson takes a cue from the sculptures of artist Stephanie Metz who has been f 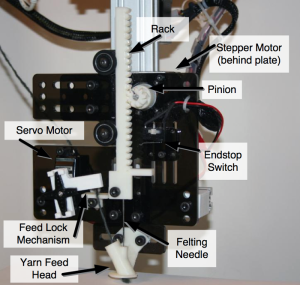 orming 3D felt objects by hand.  Through the use of a felting needle, Metz is able to build up layer upon layer of felt, which she can then shape manually, eventually creating stunning works of soft art.  Hudson automates this process by attaching a custom printhead to his RepRap 3D printer.

The new head consists of a servo motor, a rack and pinion, an endstop switch, and 3D-printed tubes for guiding the felt thread and needle.  Through a process that required some trial and error by Hudson and his team, the printer drives the felting needle with its thread through a piece of felt that acts as a base layer with which to begin the initial form.  As the paper describes it: “As we deposit this yarn along the printing path, we bond it to the layers below by repeatedly piercing it with a felting needle–dragging down individual fibers from the yarn into the layer(s) below and entangling them there.”

Hudson sought to combine the threading ability of yarn and the entanglement properties of felt for the ultimate success of the project.  As a result, he used wool and wool blends for the 3D felting process.  The prints were limited 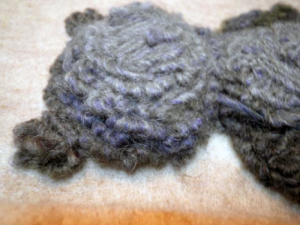 in terms of feature size, as the thread was about 2 mm in diameter, compared to the .2 to .5mm extrusion of FDM/FFF 3D printers.  Also, there was a good deal of shrinkage as the the fabric was woven together.  In the end, Hudson says, “This results in an overall randomness of the result which makes its character much more like hand knitting and much less like tightly woven manufactured cloth (or even manufactured felt).”

Interestingly, 3D felting bears some similarities with FDM/FFF 3D printing in that it was possible for the researchers to create overhangs and there’s a bit of clean up after a print is complete, such as snipping off excess yarn.  Hudson even details post-processing to achieve a tighter weave by soaking prints in hot, soapy water.

As unique as 3D felting is, the real purpose of the study and Hudson’s work at Carnegie Mellon is the overall improvement of human-computer interaction.  What better way to improve human-computer interaction than by making robots more like furry critters? To overcome the risk of puncturing electronics with a sewing needle, Hudson explored a few different methods for embedding electronics into his 3D printed felt objects. Some techniques included sewing the electronics on after the print had been created or placing them within an object mid-print. 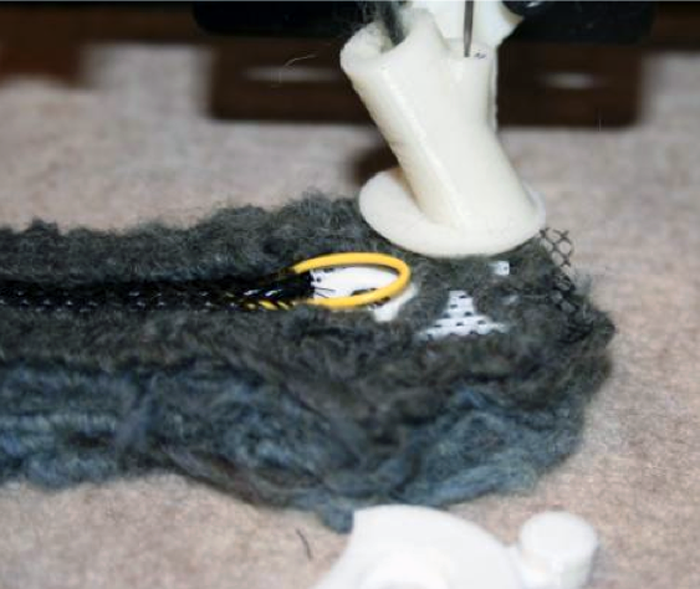 Finally, the researchers attempted to join traditional FDM/FFF 3D printing with their new felting technique by 3D printing a plastic teddy bear arm that would be covered in layers of 3D printed felt, all of which would be embedded with wires and bolts to create a functional robotic appendage. 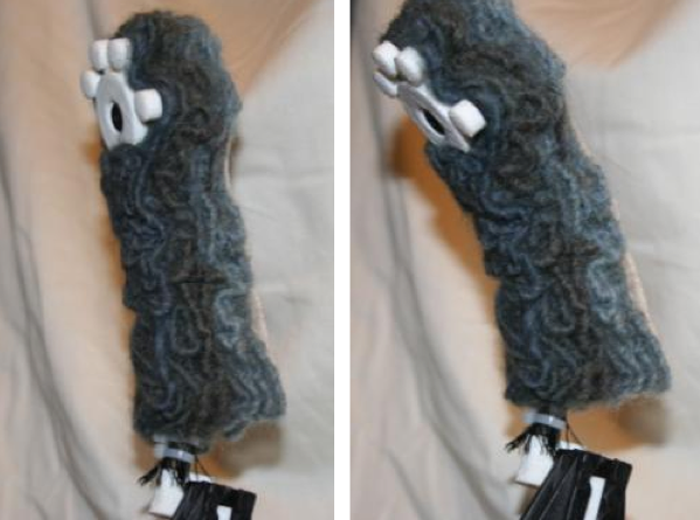 Hudson admits that this research is only the beginning.  Such problems as the robustness and imprecision of the felt material must be overcome, which means that you probably won’t get to 3D print your next Teddy in the next year, but that, when you do, it will be an indestructible force to be reckoned with.