Research into 3D bioprinted artificial human tissues represents the promise of a future in which any part of our physical body can be replaced, starting from cartilage and soft tissues all the way to full working organs such as skin, liver and kidneys. Thanks to research / manufacturing companies such as Organovo, GeSim, EnvisionTEC and many others, scientists now have access to bioplotters, machines that can print biological tissue through a process similar to inket printing.

Instead of ink, these machines use hydrogels, which are liquid gels made of live cells. These gels are assembled following CAD instructions to form tissues. The bioprinting process has been making gigantic leaps over the last year or two but the biggest hurdle yet to overcome, the reason why scientists have not yet been able to give us an accurate estimate of when we are going to have fully functional 3D printed organs, is vascularization.

What that means is that the 3D printed skin or kidney or liver tissue needs to have a capillary network of blood vessels that run through it, to carry nutrients and oxygen and keep it alive. Within the tissue these blood vessels need to get thinner and thinner to the point that they are microscopic: recreating them digitally through the hydrogel printing head is no easy task.

But scientists at the Harvard School of Engineering and Applied Sciences (SEAS) and the Wyss Institute for Biologically Inspired Engineering at Harvard University have made a significant step toward achieving this. They have developed a new bioprinting method that creates intricately patterned, three-dimensional tissue constructs with multiple types of cells and tiny blood vessels. 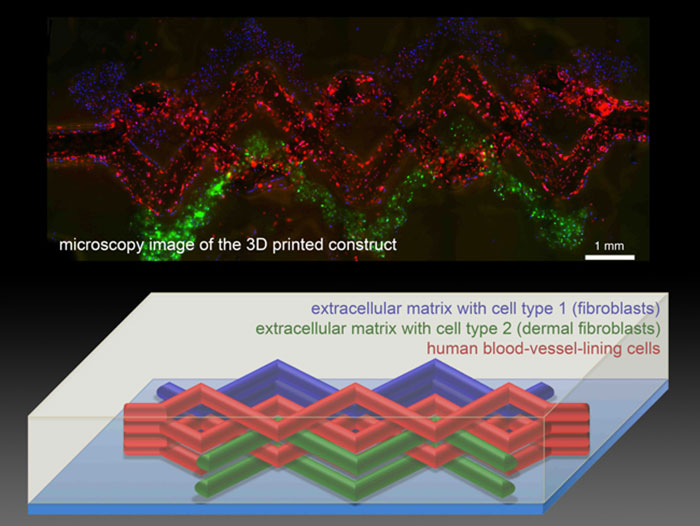 “This is the foundational step toward creating 3D living tissue,” said Jennifer A. Lewis, senior author of the study. Before actual 3D printed organs, the first longstanding goal scientists are striving for is the creation of artificial human tissue realistic enough to test drug safety and effectiveness. To do that they can use different “bio-inks” (in hydrogel form) to 2D bioprint very thin layers of organic tissue. When the layers add up and become thicker (and tridimensional), the cells in the internal layers die because oxygen cannot reach them fully. That is precisely why vascularization is so important.

The scientists at Harvard were able to develop a new bio-ink that simplified the creation of the blood vessels within the layers. One bio-ink was used to print the extracellular matrix, the biological material that knits cells into tissues. A second bio-ink contained both the matrix and the living cells. Both these bio-inks melt as they get warmer and solidify as they cool down. The new bio-ink, on the other hand, liquifies as it gets cooled down. Thus it was used to create an interconnected network of filaments which were then melted down — as the organic tissue cooled down — leaving behind a network of tiny hollow tubes. 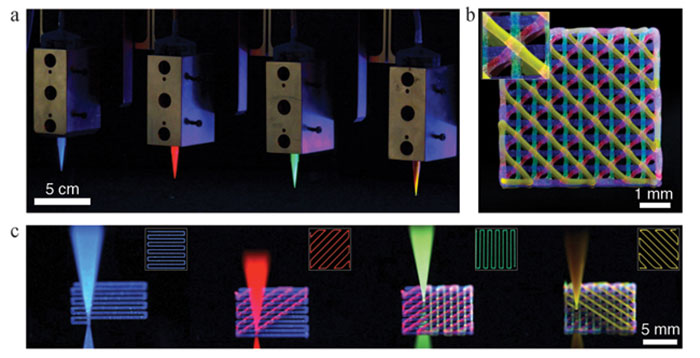 The system was then tested by building different tissues with a variety of complex architectures, all containing blood vessels and three different types of cells. Subsequently they injected human endothelial cells (the type of cells that make up the tissue lining blood vessels) and they found that the cells stayed alive and even grew.

“Tissue engineers have been waiting for a method like this,” said Don Ingber, Judah Folkman Professor of Vascular Biology and Professor of Bioengineering at Harvard and founding director of the Wyss Institute. “The ability to form functional vascular networks in 3D tissues before they are implanted not only enables thicker tissues to be formed, it also raises the possibility of surgically connecting these networks to the natural vasculature to promote immediate perfusion of the implanted tissue, which should greatly increase their engraftment and survival.”

In the future these tissues will be used to build fully functional replacements for injured or diseased tissue designed from CAT scan data using computer-aided design (CAD), printed in 3D at the push of a button, and used by surgeons to repair or replace damaged tissue. Only last November the possibility of successfully creating artificially vascularized tissued seemed so close and yet so far away. Instead it was even closer than anyone imagined. But that often seems to be the case in the world of 3D printing.