Stratasys is Taking its Digital Manufacturing Solutions on the Road 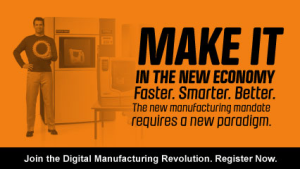 Stratasys will be hosting an 18-city roadshow of the USA touting the benefits of Digital Manufacturing starting October 21 in Boston, Massachusetts and ending January 22, 2015 in Orlando, Florida. The tour will feature live demonstrations and showcases of 3D printing and digital manufacturing techniques.

While most people know them as the parent company of MakerBot, Stratasys is actually one of the world’s largest manufacturers of industrial 3D printing and rapid prototyping equipment and their new roadshow is aimed directly at that sector of their market. Additive manufacturing has traditionally been a tool used by larger companies and corporations that could invest in the expensive technology. But in the last few years the cost of that equipment has fallen, and the quality of the technology has dramatically increased, giving smaller and medium sized companies access that it was not previously able to afford.

The Make It in the New Economy road show is directly aimed at small and medium business owners, and the message from Stratasys is pretty straight forward, not only can you afford to use 3D printing, but soon you won’t be able to afford not to. And Stratasys isn’t alone in saying so, the National Center for Manufacturing Sciences – NCMS – has launched a Digital Manufacturing Initiative, and small 3D printing stores are finding very real business opportunities by targeting small companies who previously thought that 3D printing, rapid prototyping and small run manufacturing was out of their reach.

The 18-city road show kicks off in Boston on October 21 and will be focusing on the more common uses for 3D printing. It will feature live demonstrations of 3D printing, injection molding and various industrial processes. It will also give attendees the opportunity to meet other local business owners who have started using 3D printing and those who are considering it. Here is a list of the complete roadshow schedule:

If you would like to attend any of the road show stops you can register to attend here.