Researchers at the King Abdullah University of Science and Technology in Saudi Arabia have created a concept for small, disposable wireless sensors that can be networked together as part of a smart city connected by the Internet of Things.

KAUST electrical engineering professors Atif Shamim and Christian Claudel have been working together to create wireless sensor networks to help create the smart cities of the future. Smart cities will be connected together by thousands of smart electronic devices containing sensors that communicate with each other and with more powerful fixed network nodes that will send any data collected back to central servers. This Big Data will then be processed and analyzed and then could even potentially be sent back to smart devices.

“The critical component for these processes is low-cost wireless sensing modules,” said Shamim. “Fixed sensor nodes are useful, but for these you need a lot of infrastructure, such as towers and assemblies. Our idea is that you would have some fixed sensors, but you would disperse many small, mobile sensors that communicate wirelessly to the fixed sensors, which then communicate all the received information to a central station for analysis.”

The small, mobile sensors needed to be inexpensive enough that they were virtually disposable. The solution that Claudel and Shamim devised was using an inkjet printer to print electronics on paper with electricity conductive inks. The paper was then folded into a 13 mm x 13 mm x 13 mm cube filled with a small, lightweight 3D printed microsensor and fitted with a 3D printed antenna on the outside of the cube. For their research project the mobile sensors were created specifically for use in monitoring moving water to give possible flood warnings. 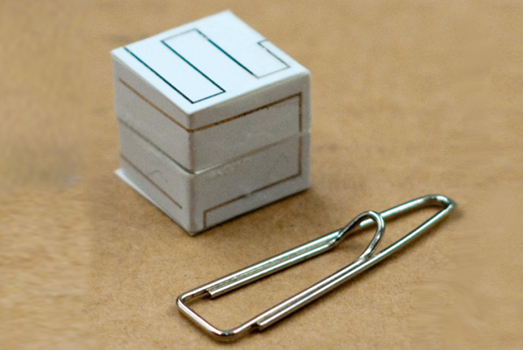 “Classical sensing solutions, such as fixed wireless sensor networks or satellite imagery, are too expensive or too inaccurate to detect floods – and in particular flash floods – well,” explained Claudel. “Instead, we tested the use of Unmanned Aerial Vehicles (UAVs) equipped with mobile, floatable, 3D printed microsensors and sensor delivery systems to sense and monitor flash flooding events.”

The UAV’s would drop the floatable sensors into the waters that the researchers want to monitor, this method of floatable sensing or mobile sensing is called Lagrangian sensing. The floating sensors are carried away by the water flow and as they continue to follow the rush of water, they will transit data back to the UAV’s who are following closely behind, collecting and transmitting data back to a fixed station. Using this constant flow of data, it would be possible to predict flash floods before, or as they are happening in real time and warn locals who may be affected. The data would be so precise, that it could also be possible to only warn those specifically at risk.

There was worry that the sensors would not work in water as well as in air, so the paper cubes were sealed in a waterproof glue. This made the entire device completely electrically sealed, but still extremely lightweight and floatable. The sensor can transmit 50 meters in all directions, and worked just as well in water as it did in the air.

The two professors collaborated on a paper that details their research called “An Inkjet-Printed Buoyant 3-D Lagrangian Sensor for Real-Time Flood Monitoring” which is unfortunately locked behind a paywall. KAUST will be patenting the process as well as other related technological innovations.

While the focus of their first tests was on a flood early warning system, the technology can be applied to multiple applications. The cubes would have sensors included that test for high levels of ammonia, sulfur or carbon monoxide and can also detect humidity or temperature. They could be dropped into forest fires, natural disasters, or sparsely populated areas. they could also be integrated into wearables, vehicles and even home appliances. These types of low-cost and disposable sensors could be the first step in creating a viable Internet of Things.