Arthur Wolf and Mark A. Cooper are to the Maker community what Qin Shi Huang was to China in the 3rd Century BC. As the young king united the country with things like a huge national road system, the Wolf and Cooper’s Smoothieboard will join CNC mills, 3D printers, laser cutters, and any other machine one might use in a hackerspace or fablab into a single device. Gauging by the project’s quick and abundant funding on Kickstarter, this all-in-one G code interpreter is as badly needed as that ancient Chinese highway.

See, with 3D printers and laser cutters, and CNC mills, each machine has its own hardware and software. You might have an 8-bit Arduino board to power your 3D printer’s various stepper motors, all running on Repetier-Host, but you could have another board to power different motors on your CNC machine, all running on its own software. Because the Smoothieboard is modular and runs on a 32-bit ARM microcontroller (4x more powerful than a standard Arduino), you have the potential to power both devices from a single microcontroller. And, because it’s open source, if you need to create new code for your water cutter, you can write your own firmware and drag and drop it into the Smoothboard’s native software.

There have already been 200 beta-test versions of the Smoothieboard in use and older prototypes have been around since 2010, so the community surrounding the project has provided a great deal towards the board’s progress. One user on board is already happy with what the Smoothie can do, commenting on Hack-A-Day: 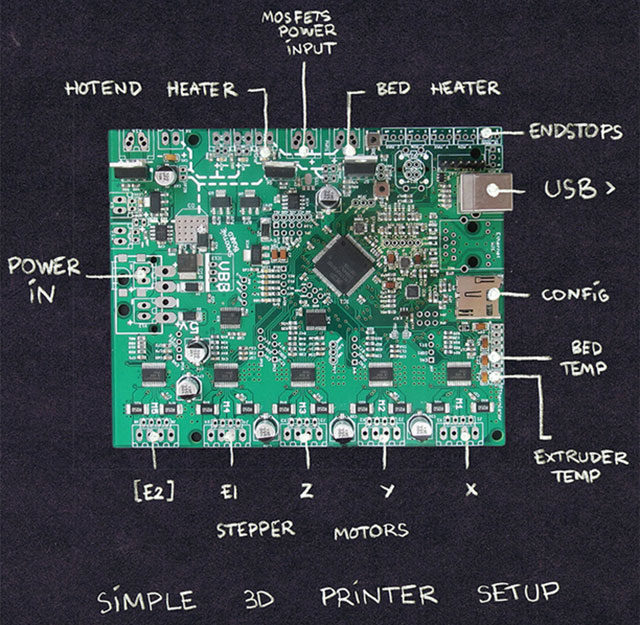 Just want to say, I have a hacked-together Smoothie on a protoboard, and I freakin’ love it. Drag-and-drop flashing and uploading of Gcode files is really handy, the simple terminal shell is much easier to use than remembering a million gcode commands, the motion is nice and smooth, and adjusting config values in a cleartext file rather than re-flashing or using eeprom saves a lot of time in setup and upgrades.

One thing to note, though, is that the ethernet pad is there, but it’s not supported in software yet. Over on the IRC it sounded like they don’t expect that to happen any time soon, but a Raspberry Pi and Octoprint (or a fancy panel) can do the same thing.

Yes, while the (approximately $100) board does have an ethernet port for eventual web-based control, the software for it hasn’t been written yet.  The project’s creators are also thinking about working towards closed-loop control. 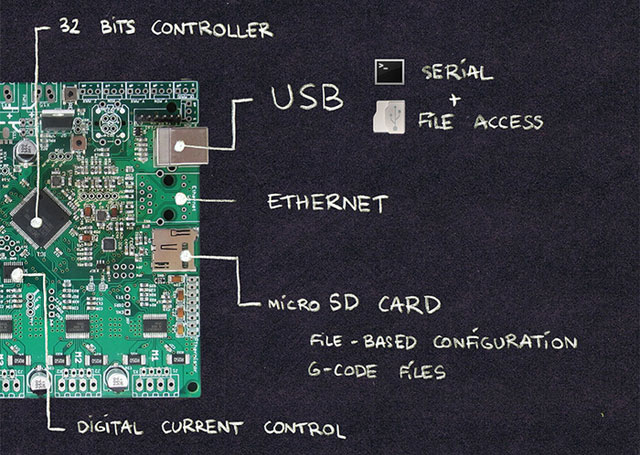 In a recent conversation with Nicholas Seward, creator of the RepRap Simpson and Wally, he expressed that the Maker community was a bit disjointed when it came to the tools in use.  While he moved from building his own CNC mill to building his own 3D printers and could easily see the connections between the two devices, he indicated that there isn’t much communication between those who use 3D printers and those who use other machines in the larger Maker community. The Smoothieboard could change all of that and make cross-understanding of those disparate machines much simpler.

At the moment, the Smoothieboard is meant for 3D printers or CNC mills or lasercutters, but, in my mind, we’re not too far from changing those ors to ands. It may not seem like a big deal, but with Smoothieboard’s potential to control a wide variety of devices, the construction of hybrid machines like the Microfactory and the Fabtotum will become much easier. A single board could possibly manoeuver multiple arms, for printing a part, removing it from the platform, and cleaning it off with a laser cutter. When the Smoothieboard can run all of those things simultaneously, they will truly be the Qin Shi Huang of the Maker community.