Marijuana market research firm ArcView Group has estimated that the marijuana market was worth $2.7 billion in 2014, an increase of 74% from the year before, while Wohlers estimates that the 3D printing market, which hit $4 billion in 2014, will exceed $7 billion in 2016.  As marijuana legalization continues across the US, there may be an increasing number of businesses, like 3Dponics, looking to capitalize on both.  A new startup from Indiana seems to suggest, “What better reason to get lifted?” 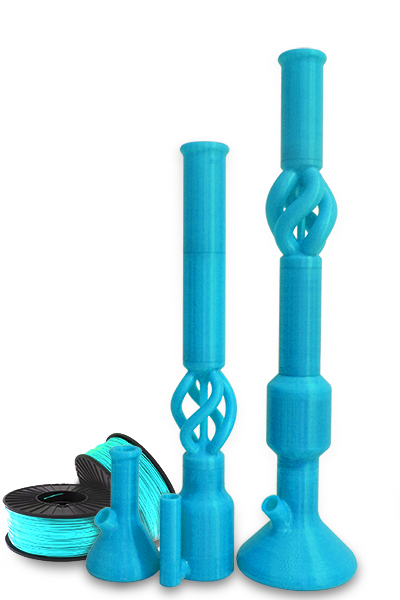 Lifted Innovations has found a way to combine both of these growing markets with a single product: 3D printed water pipes.  Anyone who’s strolled the Venice promenade knows that, for those who smoke regularly, the aesthetic of a bong is of the utmost importance.  Both a cloudy conversation starter and a friend, a water pipe must be appealing to the eye and, by 3D printing the bong itself, a whole new range of complexity can be achieved, previously impossible with traditional glass blowing.

Perhaps inspired by the modularity of 3Dponics’ hyrdroponic system, Lifted Innovations offers customers the ability to purchase printed components to build their own pipes at home, including bases, percolators, tops, and more, all of which can be threaded together with printable threads.  Fun spirals and multi-chambered pillars add a unique look to the pipe that might not be achievable through glass blowing.  They’ve also got 3D printed mini pipes and a case for weed concentrate. All of this is then 3D printed by the company and shipped to your door so that you can receive your own personalized bong in a huge range of colors, such as UV Color Changing Sunlight and Glow-in-the-Dark Blue. Prices are reasonable for a custom pipe, but not so reasonable compared to the model of 3Dponics, which gives away the STL files for free.

By now, it may have occurred to some readers: just how safe is it to smoke out of a plastic pipe? Or, at least, this occurred to me. I’ve emailed the company for more information, but their FAQ suggests that “As long as a glass bowl/slide is properly used while smoking the plastic does not produce any toxic or harmful fumes” and “PLA is a “thermoplastic” meaning that it is meant to be heated up to change its form, however, it takes a great amount of heat, much hotter than smoke, to actually melt the plastic.” Acrylic bongs have been around since the 70’s and smoking out of a PLA pipe with the proper bowl is a practice pursued by some, though there have been issues with the durability and water resistance of the PLA over time, leading one user to consider printing in ABS and coating the print to make it water resistant. I’d be even more worried about heating up ABS than PLA though. Perhaps the creators of Lifted Innovations have figured out a workaround? This would definitely warrant selling the prints and not the files.

We’ll have to wait to hear back from the company before learning more. This, of course, will only be the beginning for such a business and the competition will surely heat up over the next year or so. Soon, there will be crowdsourced design contests and if 3D printed glass becomes a widespread reality, the industry will reach new highs altogether.