Computer Aided Design (CAD) is not for everyone. Those of us who would love to see a wider range of people able to design their kids prosthetics, asthma masks and the many other life changing beneficial applications of home 3D printing, wish that this were not the case. After all, more people than not can pick up a 2D scalar, and even vector, design program; tinker in photo-editing programs such as photoshop, so it seems a shame that 3D on a 2D screen still provides a complexity that most CAD programs only go so far in overcoming.

My educational background is in 2D design: illustration, graphic design, photography, typography and so forth. I’d wanted to go into CAD at school but simply the opportunity was not there — it was a grammar school, a UK selective admission school based upon tests at the age of 11, thus a school that received a lot of funding, an educational deficit that says a little about the area, a bit about the UK in the 1990’s and a lot merely about the luck of the draw regarding which selective school happened to be closest to home. 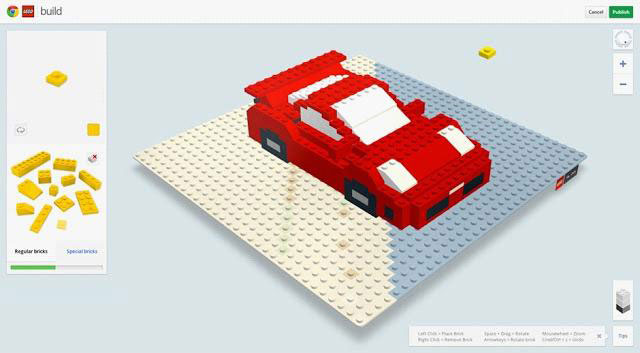 The move from 2D to 3D wasn’t too difficult. In tests I was always show to be blessed to be talented in spacial awareness and maths, indeed in the top 0.1%. This is no boast – I am a person with high functioning autism (you’d probably not notice it in person) so excelling at art and maths is an inevitable by-product of what society still unfortunately considered a disability. I’m a big advocate of promoting autistic workers in STEM (Science, Technology, Engineering and Mathematics), which already has a 20% prevalence in the USA. That’s right, today 1 in 5 workers in science, tech, engineering and maths have some form of autism.

But, not everyone is lucky to have these autistic artistic genes.

My early childhood consisted of hours upon hours of playing with Lego. My family was both concerned and bewildered that their five year old was building models of moon-bases and space vehicles. Lego, then, was more than a toy to me. It was a way to learn, to experiment creatively, to visualise, to innovate. I’m a massive advocate of equality and enemy of elitism, as some may have picked up from reading my articles. I know from first hand experience that autistic kids from poor backgrounds need a lot of help to realise their potential. Help they usually don’t get.

You’ll hopefully have followed me thus far in perceiving that this is no mere vain wander back through the annals of my youth. One of the ways that society has progressed the most is technology. Whilst the attitude of many people is still, to be frank, archaic, regarding the issues I’ve discussed, technology now means that lack of awareness and closed-mindedness don’t have to be such obstacles. Children and adults alike can enjoy easy access to applications on beautifully simple interfaces such as touch-screen smart devices and web apps. One such web app is Build With Chrome.

At this point I’ll iterate that this is not a 3D printing app – it is a 3D app. Whilst the real potential popularity of home 3D printing now lays in the 100,000’s of free open source designs available on a wide array of 3D file repositories (if you are having difficultly finding them all, here is a free 3D file search engine I put together a while ago that can help you) for you to download and print at home the utility of 3D printing is going to be massively expanded by easy to use 3D design programs that at last allow people to see if they wish to try their hand at design a few things themselves.

Most people will not want to come home from work to sit down in front of a computer after dinner with a 3D design program to design a gift for their niece, vase for the living room, unique plant pots, ad infinitum. Although it could be said that the hours people currently expend upon 3D computer games such as MineCraft provide roughly analogous skills that could be utilised for slightly more productive ends. However, given that many newcomers would say that their few experiences with CAD programs, even the simple one’s such as TINKERCAD, 3Dtin and Sketchup, are no walk in the park, it’s going to take a range of genuinely simple apps to provide an entry point to CAD for 3D printing.

There are now a number of very simple apps that fulfil this criteria such as the really rather cool, and free, Shapeshifter by Autodesk, which you really must have a quick play around with to see just how easy it is to make certain forms for 3D printing now. There are, I will add for newcomers reading about 3D printing, an increasingly broad range of simple solutions for getting a 3D form to print – apps that output 3D files for your smartphone for example such as 123D Catch and Trimensional. Other simple solutions include apps by eBay in the form of Exact – players small and large are entering this niche to seek solutions.

All this brings us to Build With Chrome. 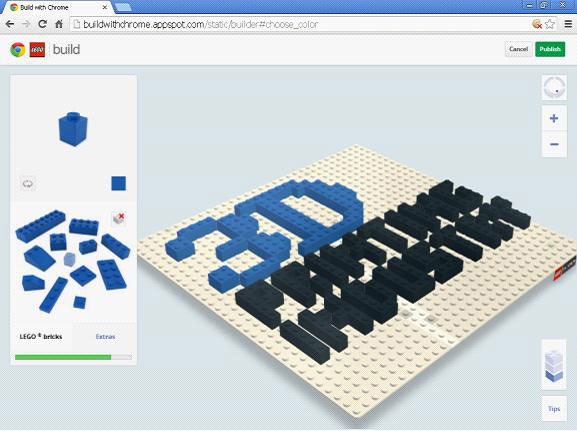 It’s really not going to take many words at all to describe it, and that is exactly the point – simplicity. Build With Chrome is a web app for Google Chrome browser that allows users to build with virtual Lego. Its interface is basic: choose a Lego block, turn it around as you need to, place it. Laid bricks can be erased. The viewer perspective can be rotated.

What this means however is that becoming accustomed to navigating in three dimensions on a two dimensional screen is as simple as, well, building with Lego bricks. It’s child’s-play. And that’s the beauty of it. Whether an adult newcomer or a child, almost anyone can take the step into a 3D virtual making space.

This is, very clearly however, just practice. There is no option to save as a 3D printable file, nor indeed any kind of file, as the save function places your Lego construct on a map for the world to see.

What on Earth would you want to seriously engage with a Lego building program for? I could write a list as long as all the items that have ever been built with the magic little bricks. I’m only going to give one example of a possibility to open any cynical minds that may be tightly closed against all this strange talk of adults playing with apps aimed for children that don’t even allow a person to save the creation for 3D printing…