If Love Could be 3D Printed — My Wife As An Angel

They can’t be made, you have to find them.

Each one is unique.”

Now, angels can be made, and be made unique, as a beautiful 3D printable by maker Udomac, as he proves in his romantic ‘My wife as an Angel-Bust.’ Upon stumbling across this on 3D file repository website Thingiverse, how could I resist sharing the love?

We have featured the work of Udomac here at 3DPI previously, in the form of the giant home 3D printer he calls the Big Brad, with huge build dimensions of 46 x 32 x 42 cm / 18 x 13 x 17 inches (X-Y-Z). Whilst Udomac is clearly a person who is unafraid to dive into engineering and design projects that many would find intimidating, there is a simplicity to his personalised angel that puts it within the realms of possibility for anyone even with only basic 3D printing skills.

Udomac tells us that he began by creating a 3D Scan of his wife with Skanect Pro by Occipital, a great little piece of software primarily aimed at Microsoft’s Kinect on Windows operating systems and the Xbox video games console. A list of Skanect features follows post-script.

Once he was satisfied that the scan bore a strong resemblance to his beloved wife, he then edited the mesh directly, standard processing procedure for users seeking to create input from 3D scans. Newcomers may wish to lighten their load by using simpler input methods such as Autodesk’s 123D Catch, which is literally as simple as taking  aphotograph with your smartphone to be knitted together by an intuitive automated program.

Udomac then combined his tweaked and refined 3D scan mesh output with the Angel Statue model by Rest Crew from thingiverse. He added some text and printed it in white PLA plastic with raft and support created in Makerware, MakerBot’s 3D printing interface. Finally he printed the 3D design on his home 3D printer at a setting of 220˚C.

My wife as an Angel-Bust can be found here should you wish to use this guide as a way to create your own personal statue to glorify your eternal love for that very special someone. 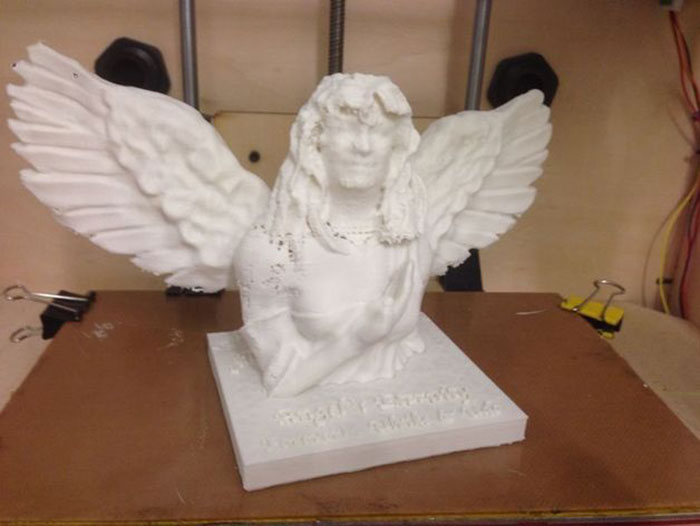