While many of the most recent consumer/prosumer grade 3D printers are aiming low with previously unheard of price points – often at the expense of other qualities – some men just want to watch the world burn and go higher, wider and deeper where no maker has gone before. A good example of this Texan-style bigger-is-better approach is the Big Brad 3D printer, a Thingiverse project where size truly does matter. Even though its origins lie in the old world,  Augsburg, Germany to be more precise, the printing area on the machine created by Udo is as vast as the open lands of the South – with the basic set-up Big Brad enables 3D printing plastic goods on a 46 x 32 x 42 cm / 18 x 13 x 17 inches (X-Y-Z) non-heated platform.

The basic parts of this 3D printer are designed by Udo himself and printed & printable in PLA and ABS – the latter material only used for the X-carriage and the extruder pieces. The brains of Big Brad are standard maker-grade goods with RAMPS 1.4 and other widely available components and electronic parts, hailing probably from China, to power the machine. At least heating doesn’t seem to be an issue with this hardware, as Big Brad in its current form doesn’t use fans even on the nozzle extruding the 1.75mm filament. That’s not to say that the project is fully complete as such, as creator Udo does have several improvement ideas for further iterations of the Brad, such as a heatable printbed, optical endstops replacing the current mechanical ones, general refinement on the visual side and other factors. But – already as such, in my opinion any product that uses beer and wine bottles for size comparison can’t be all bad, as it does speak volumes of the great positive, upbeat attitude behind the brains of the project. 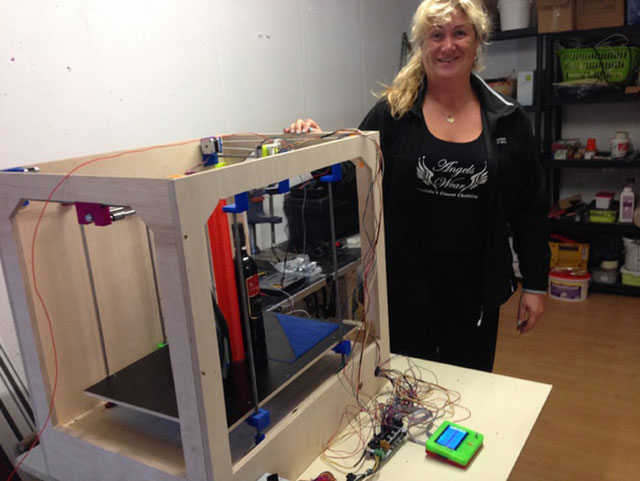 If you’re interested in finding more about the Brad and how you could make one yourself, hit the source link below.