If you’ve been following the adventures of crypto-anarchist Cody Wilson, you may recall that, two years ago, the founder of Defense Distributed and man behind the 3D printable Liberator Pistol received a letter from the State Department requesting that files for the 3D printed gun be removed from the web.  With the two year anniversary since receiving the letter, which warned of prosecution for violating laws regarding the international export of unapproved firearms, Wilson is now challenging the State Department with a lawsuit, according to Wired. 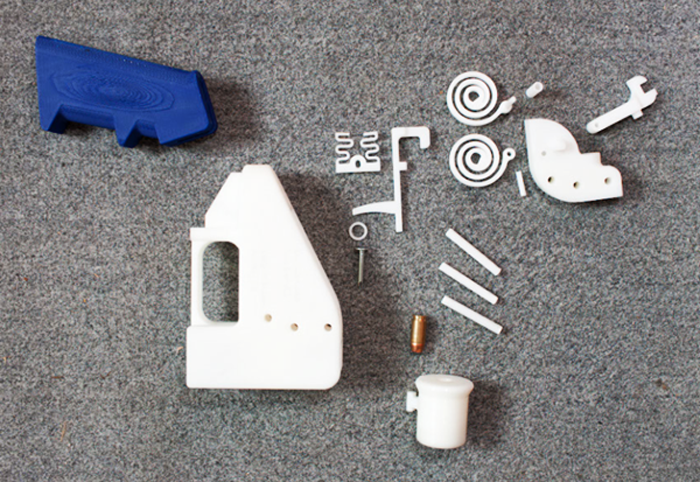 Defense Distributed and the Second Amendment Foundation are suing the State Department, along with Secretary of State John Kerry and several other officials, have violated their first amendment right to free speech.  By directing Defense Distributed to remove the 3D printable files for the Liberator from the Internet, the plaintiffs allege, in a document filed Wednesday, that the State Department’s Directorate of Defense Trade Controls (DDTC), infringed on their freedom of speech.

In the original 2013 letter, the DDTC claimed that the gun manufacturing group may have broken laws regulating arms export abroad, the International Traffic in Arms Regulations (ITAR), in that the files enabled the 3D printing of guns in other countries.  In addition to the Arms Export Control Act (AECA), the ITAR was originally enacted in 1976 to prevent the shipment of arms listed on the United States Munitions List to the USSR and their allies during the Cold War.  In order to deliver such products to foreign countries, firearms manufacturers must register with the federal government, which involves fees starting at $2,250.

Defense Distributed, however, is claiming that the files for their printable firearms constitute “speech”, which is protected online. Alan Gura, the lawyer leading the suit, tells Wired, “The internet is available worldwide, so posting something on the internet is deemed an export, and to [the State Department] this justifies imposing a prior restraint on internet speech. That’s a vast, unchecked seizure of power over speech that’s…not authorized by our constitution.” By “prior restraint”, Gura suggests that this constitutes censoring speech before it is published.  Wilson says,  “If code is speech, the constitutional contradictions are evident…So what if this code is a gun? Nothing can possibly stand in the way of this being disseminated to the people, and yet they insist on maintaining the power to do so.”

In addition to the first amendment, the document claims that, by preventing the sharing of printable gun data, the State Department is infringing on the second amendment rights of Defense Distributed and its proponents to bear arms.  Furthermore, the group is claiming that their right to due process was also violated, as prosecution was threatened toward Defense Distributed, without the legal proceedings necessary to determine whether or not they have violated the law and without a time limit on when such a decision would be made.  The organization also tells me that, while waiting these past two years, they have applied for ITAR approval using two separate entities, saying that it was “very expensive.”

Alongside Gura, who has won two second amendment cases previously, is Matthew Goldestin, an expert on ITAR.  Goldstein comments to Wired, “You just can’t do this. You can’t punish someone for speech just because someone believes that speech could be used for bad stuff…If you even just think about all the reposts, it’s a mess. It’s like grabbing at particles of smoke.”

Defense Distributed has also turned to the Electronic Frontier Foundation (EFF) for legal advice, since it received the letter two years ago.  Interestingly, for one year, the EFF also sponsored the public development of Dark Web browser Tor after it was released from direct Navy funding.  The EFF continues to advocate its use today as a means of browsing the Internet free from US government spying, despite the fact that the browser is still very much invested in and developed by the very same government, including the US State Department.

While the ITAR and AECA prohibit the international distribution of weapons, they also regulate technical data, such as blueprints outlining the means to construct firearms, a fact that Defense Distributed takes issue with as well.  And, in the mid-90’s, the regulations grew to encompass cryptography, deeming cryptography software military munition.  Wired explains that, as a result, the Department of Justice began investigating Phil Zimmermann, the inventor of crypto-communication software PGP, for violation of ITAR.  Eventually, cryptographer Dan Berstein, sued the State Department for violating the First Amendment and won.  Encryption software regulation, however, was moved to the Commerce Department to prevent the suit from affecting ITAR.

Wilson sees himself as bringing the case to light once more, saying, “This is a second bite at the apple. It’s very much the spiritual successor to Bernstein.” And Bernstein supports their case, telling Wired, “I see this as very similar to the PGP situation,” he says. “I’m not a gun nut. I don’t own a gun. But publishing a blueprint for a gun should not be illegal.”

As the case makes its way to court, Defense Distributed is seeking to an injunction to be placed on the State Department, to reinstate the group’s ability to publish its 3D printable gun files, including the many that its has developed in the past two years. Also during that time, numerous others have 3D printed their own guns or designed their own files.  If the State Department wins, however, a precedent will be set that may render the publishing of printable gun files illegal. If it loses, on the other hand…

The complete court document is embedded below.  What are your thoughts? Is the publication of 3D printable gun code free speech?