Could Metal Give Japan a 3D Printing Boost?

Have you been keeping up with 3D printing in Japan? Maybe not. According to Reno Tibke at Akihabara News, Japan’s additive manufacturing (AM) sector is rather small compared with other countries, 0.3% of the global share to be more specific.  But, Tibke points out, that may soon change.

Though Japan has had its own AM stories in headlines, including 3D printed fetuses and, possibly the first, 3D printing photobooths, its 3D printing power lags behind other countries.  The US is the furthest ahead in terms of investing in 3D printing and other countries, including the UK and China have also invested significantly.  At the same time, however, no one has quite figured out how to bring down the price on 3D printed metal technologies.  At the moment, additive manufacturing with metal is isolated to a small range of processes, most notably selective laser-melting, which is extremely expensive and still has issues with reliability and consistency of results.  Tibke proposes, with humor and irreverence, that 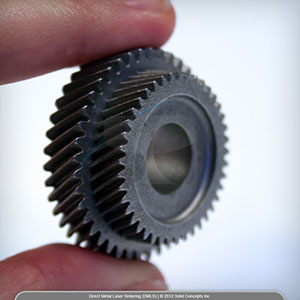 There’s an article at The Engineer that cites an official declaration by the Japanese government to pursue 3D printing, but their source link seems to have gone defunct; however, with 3D printing on the cover of Japan’s Ministry of Energy, Technology, and Industry magazine, Tibke indicates that it’s clear that the government is beginning to focus energy and money on the technology.  And, if Japan is able to produce its own metal printers instead of relying on those manufactured in other countries, the author proposes that Japan could leap (frog) ahead of the rest of the world.

I’d hasten to add that there are other 3D printing technologies that could also enhance Japan’s role, if they could beat other countries to the punch. Surely, 3D-printed electronics, another holy grail of 3D printing, would be the envy of any country. And, as Japan is one of the leading robot manufacturers, 3D-printed electronics and 3D-printed metal would make for a nice combination, leading such dreamed-of technology as fully self-replicating 3D printers.