It’s now been obvious for some time that humanity is living outside of its means, causing potentially irreversible damage to the climate, consuming the last drops of finite resources, and producing huge amounts of waste. Though only a component of the drastic effects that the species is having on the planet, the amount of plastic humans waste is shameful. A University of Georgia study said that of the 275 million tons of plastic produced in 2010, about eight million tons wound up in the ocean, obstructing the airways of marine life and poisoning the water with toxins. And that’s just in our oceans and doesn’t include the waste piling up in landfills and poisoning the Earth.

While reducing the amount of unnecessary packaging surrounding our consumer goods and converting to less toxic materials can help reverse this negative trend, 3D printing provides a powerful opportunity to convert our manufacturing methods to more sustainable models. Rather than fabricate objects with newly made plastics, seen in the typical 3D printing filaments currently available on the market, we have a chance to start reducing plastic waste and 3D printing with recycled materials. There are a few different recycled filaments on the market but when it comes to sustainability, the market still needs to be explored and can never get too crowded.

The newest recycled filament on the market comes from Dutch filament manufacturer Innofil3D, who has teamed up with CiorC to create InnoCircle. Together, the partners are releasing a line of monofilaments made from recycled ABS car parts and PET bottles. To better understand the product, I spoke with Jan Willem Slijkoord, the owner of CiorC, who told me about the motivation behind the product, as well as how InnoCircle recycled filaments perform as compared to less sustainable options.

Jan told me about two larger plastic product chains, for ABS and PET, that he hopes to turn into a closed loop with InnoCircle. He begins by estimating the amount of ABS that could be salvaged from autos in the Netherlands alone, “The first loop originates from disposed passenger cars. In the Netherlands only, where I live, we dispose of 230,000 cars annually. An average passenger car weighs 1,022 KG and delivers about 70 KG polymers, after recycling, containing mainly PP, PE, nylon, and ABS. I estimate that every car contains about 15 KG of ABS, originated from interior parts, trim components, bumper bars, etc. So this means that about 3,450 tons of ABS is recycled from car parts in The Netherlands annually.”

That’s a lot of “waste” material that could be reused to produce new objects. And, Jan tells me, that only a small fraction of all sources of this material is sufficiently safe and pure to use and compliant with Europe’s REACH legislation. He continues, “Plastic parts from disposed cars are then shredded, washed, and separated. This material can be used for making monofilament. In contradiction to the housings of electronic equipment, this recycled ABS does not contain hazardous flame-retardants. The material is fully REACH compliant. The European REACH legislation addresses the production and use of chemical substances, and their potential impacts on both human health and the environment. One of the major elements of the REACH regulation is the requirement to communicate information on chemicals up and down the supply chain. This ensures that manufacturers, importers, and also consumers are aware of information relating to health and safety of the products supplied.” 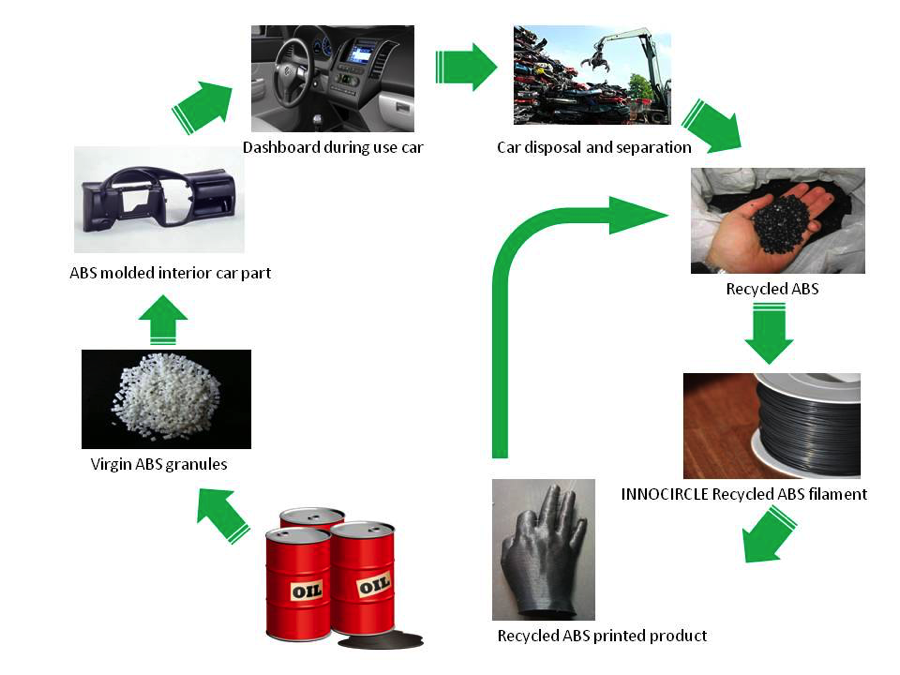 So, this way, InnoCircle will also be REACH compliant, Jan points out, “By having the REACH certificate, InnoCircle meets the latest REACH EU regulations and intends to offer responsible filaments.” Jan adds that the company has tested the ABS filaments produced so far and claims that they demonstrate the necessary physical properties, “In addition, we have done extensive research as to the mechanical and printing properties of these materials. The InnoCircle recycled-ABS filaments print well and show good mechanical performance. Finally, once you decide to dispose of your own printed products, these can be recycled, too, and, based on your recycled products new recycled filaments can be manufactured.”

And this is just the first loop. The PET loop would help close the circle of material used to produce platic bottles. Jan tells me of the huge amount of PET used to produce these bottles, “The second loop originates from PET beverage and water bottles (see figure 2). The global consumption for PET packaging was estimated to be 15.4 million tons in 2012. About 80% (12.5 million tons) was accounted for by PET water bottles.”   The progress we’ve made so far, however, is not to be disregarded, “Globally, about 7.5 million tons was recycled in 2011; so, roughly half of the total consumption. PET recycling is becoming increasingly effective, which is good news! In Europe we collected 1.6 million tons originated from bottles in 2011, which were processed after recycling into new bottles, APET sheet, fibers for textiles, and carpets.” 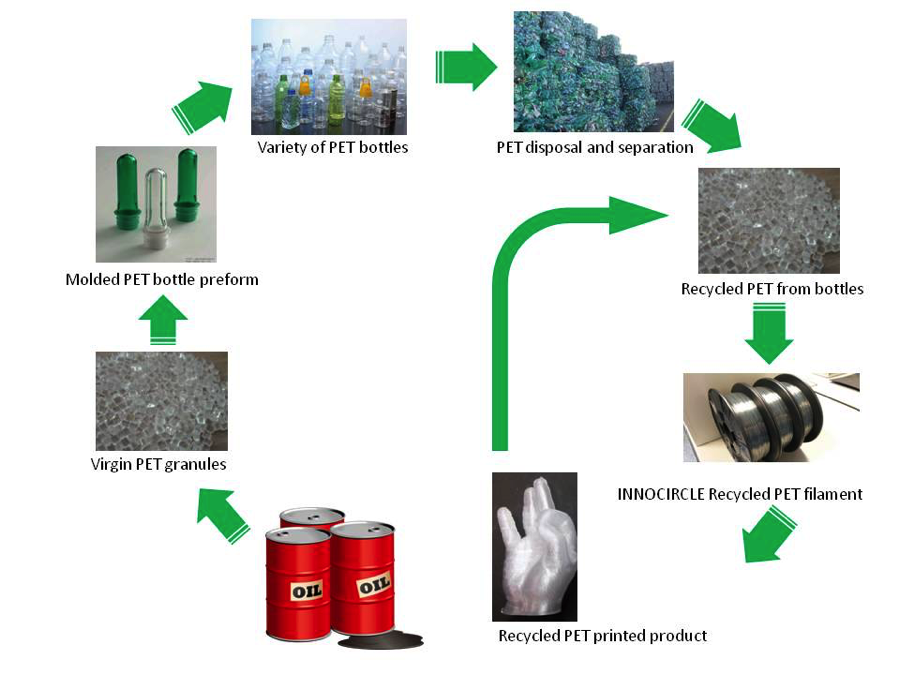 To take that plastic recycling even further, Jan proposes the development of filaments made from PET waste. In particular, he sees InnoCircle has playing a role in this market, saying, “CiorC and Innofil3D have developed a unique transparent filament line based on more than 50 wt% recycled PET, which is also food-safe. Food safety is a unique feature of our InnoCircle PET material! In addition, the material can remain transparent, even when the cooling rate after printing is sufficiently high. CiorC and Innofil3D enable Makers to print any product based on a responsible and sustainable InnoCircle recycled PET filament.”

Though InnoCircle is just one among a few consistent and responsible recycled filaments coming soon to or already on the market, it’s clear that Jan has done his research. In fact, Jan is also working with TNO, the Dutch National Laboratory of Applied Sciences, where he is engaged in helping businesses transition towards more sustainable practices. TNO, Jan tells me, has been involved in 3D printing since 1997 and, if you are a regular reader of 3DPI, you’ll recognize their name from some pretty exciting work in food printing and the development of the PrintValley machine, a fast and continuous 3D printing assembly line.

Ciorc and Innofil3D are just about ready to launch their recycled InnoCircle filament line. Though the prices have yet to be set, both InnoCircle recycled ABS and PET are available in 2.85 mm and 1.75 mm on 0.5 to 1 Kg spools. The ABS, REACH & RoHS compliant, comes in black, while the food-compliant PET comes in transparent. Next week, from March 3 – 5, the partners will show off their recycled ABS and PET filaments to the public at RapidPro Exhibition in Veldhoven (near Eindhoven), The Netherlands. If you can’t make it to the event, you can learn more about the materials by visiting the Innofil3D website or contacting Jan personally.

InnoCircle, along with other recycled materials, are just the beginning towards more sustainable manufacturing practices. In an interview with 3DPI, 3D printing and open source enthusiast Prof. Joshua Pearce promoted an idea called industrial symbiosis, in which various manufacturing plants and businesses might be located in the same eco-industrial park. Excess material from one facility might then be transported to a neighboring plant to be used in production there. Though they may not be on the same location as their supplier, via an eco-industrial park, CiorC and Innofil3D, are, then, already active in industrial symbiosis through the development of monofilament based on plastic waste from companies making technical automotive parts. It’s only a matter of time before these sorts of relationships extend into the general manufacturing ecosystem as a whole, to better improve the greater ecosystem encompassing us all.