Thanks to a partnership made possible by the National Additive Manufacturing Innovation Institute (NAMII), the flagship institute for the Obama administration’s National Network for Manufacturing Innovation (NNMI), two NAMII members have been able to team up to ensure mutual success. On July 29, 2013, Oxford Performance Materials announced that it has won a contract from arms manufacturer Northrop Grumman Systems Corporation (NGSC). 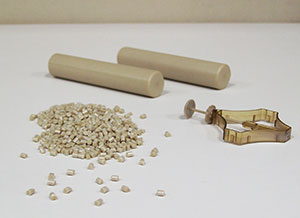 OPM, which made headlines in February, 2013 with the first FDA-approved 3D-printed implant, a cranial device used to cover cracks and holes in the skull of a patient with head trauma, will develop prototypes and test components for Northrop, made with their proprietary OXPEKK material, their biocompatible version of the thermoplastic Poly Ether Ketone Ketone. In addition, OPM will add these designs to their database of structural design files. To achieve the goals of the contract, the firm has purchased their second EOSINT P800, a high temperature laser sintering machine that 3D prints plastics at temperatures up to 385 °C.

President and CEO of OPM had this to say about the contract:

We have been developing PEKK materials and advanced manufacturing processes for over ten years. We have also established a world-class biomedical 3D printing facility and sell these products commercially worldwide. We are therefore very pleased that our in-depth knowledge of PEKK and the 3D printing (High Temperature Laser Sintering –HTLS) process has been recognized and we have been selected to undertake this critical development. OPM has a very clear focus on 3D printing of Mission-Critical parts where there is no room for error, such as in aerospace and medical applications.

The relationship between OPM and Northrop Grumman, in my mind, exemplifies the sorts of partnerships we will see made possible by a NAMII headed by the National Center for Defense Manufacturing and Machining (NCDMM), a non-profit whose mission is to “deliver optimized manufacturing solutions that enhance the quality, affordability, maintainability, and rapid deployment of existing and yet-to-be developed defense systems”. The NCDMM, led by Ralph Resnick, also director of NAMII, recently launched a new endeavor with weapons manufacturer Lockheed Martin, called the Mission-Ready Sustainability Initiative, dedicated to sustainable war materials.  Resnick issued the following statement regarding the initiative: “NCDMM, along with Lockheed Martin is pleased to take the lead in establishing an initiative that not only values sustainability efforts, but also has the potential to accelerate activities and innovations that yield significant improvements for the warfighter, DoD, and industry clients.” With such companies as Lockheed Martin and Northrop Grumman listed alongside Oxford Performance Materials as members of NAMII, I personally believe that it’s not unlikely that OPM and other organizations on the NAMII roster will find themselves working in ways that also fit the mission of the NCDMM.