Richard Horne (aka RichRap) has released the source and design files for his latest development – the 3DR Delta printer. http://richrap.blogspot.co.uk/

This 3D printer has been designed this year and aims to achieve a number of key goals for an easy to use, quiet and fast 3D printer, the delta design allows for a very compact printer only using a small amount of desk space. The design is also based on a 3D printed set of parts repeated three times to form an elegant delta structure.

Richard has demonstrated the 3DR at various events and shows this year, most recently at the London Mini Maker-Faire where it attracted a lot of interest from visitors and other exhibitors when printing out multicolour items live during the day.

Richard has been working on a number of new RepRap projects this year, and if these indications of new printers and mixing extruder developments are anything to go by we should be in for even more interesting releases. 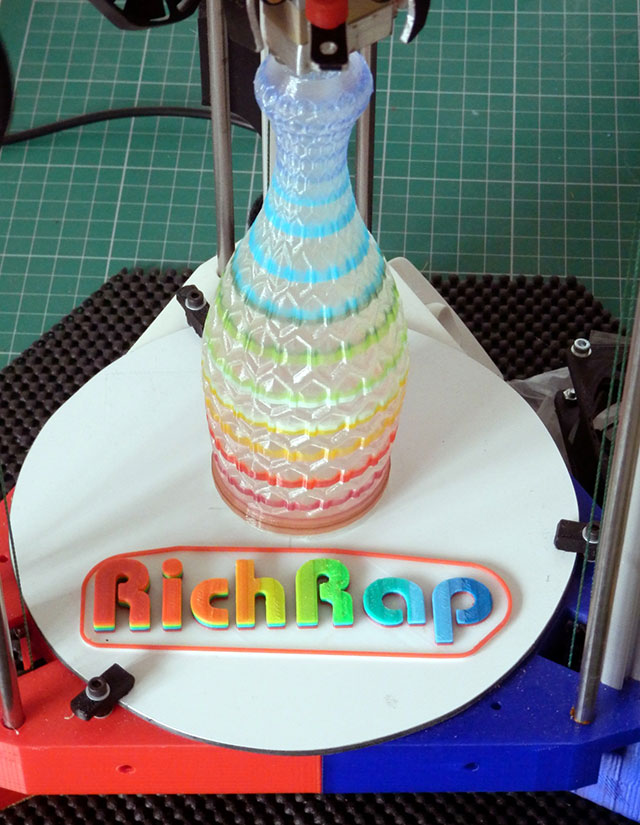 Richard commented – “I’m really glad to get 3DR out in the wild, It’s a lot of work releasing any design for others to build and use, I hope people will make, further develop and continue to design and share new RepRap 3D printers for a long time to come”

When asked what’s next – “My focus is on the TCT Show for now, we are having a RepRap community get together in September, so that takes a bit of organising, then more 3D printing developments, and after… who knows”

If you want to see the printer and meet Richard and the RepRap Magazine team along with many other key developers from the ever growing RepRap community, they will be on the RepRap community meeting hub on stand G54 at the TCT Show in September at the NEC Birmingham. New printers, projects and announcements are expected during the two day show.