When I first wrote about Slovanian house printer manufacturer BetAbram about a year ago, it was hard to determine just how serious the company was when it said that it would sell three different models of large-scale concrete extrusion printers, starting at $12k – $16k. But, when the company started showing off their 3D printed creations in December of last year, it became clear that the company truly believes in what it’s doing and, today, they’ve provided further evidence that BetAbram really is capable of building their epic machines by completing the largest of their line, the P1 3D printer.

Previously, BetAbram was able to prove their capabilities of 3D printing concrete structures with a nice chunk of staircase.  They even got Slovenian Olympic hammer thrower Primož Kozmus to stand atop their construction to demonstrate just how strong it was.  In the promo video below, BetAbram shows off their largest house printer, the P1, in all of its 2000mm x 9000mm x 16000mm glory.  The P2 and P3, however, will be 2000mm x 6000mm x 12000mm and 2000mm x 3000mm x 4000mm in size, respectively. At the moment, BetAbram says that it only takes two months to assemble a printer and, once they hit full production, it could take even less time.

The firm tells me that, now that they’ve refined the P1, they plan to 3D print a two-story house, measuring 12 x 8m. They’re still in the process of designing the house, but provided me with a rough CAD model of what they’re beginning to envision and tell me that they plan to complete the home by the end of July. Rene Ribič, sales manager at BetAbram, tells me that, with their process, 3D printing a 25 cm wall in December took about 4 to 5 hours to dry, but that the cold weather may have slowed the drying process. He tells me, “So, we think that drying time will be shorter this time, as it is summer. And, also, when you print longer walls, the material has more time to dry, so it is possible to print more than 25cm.” 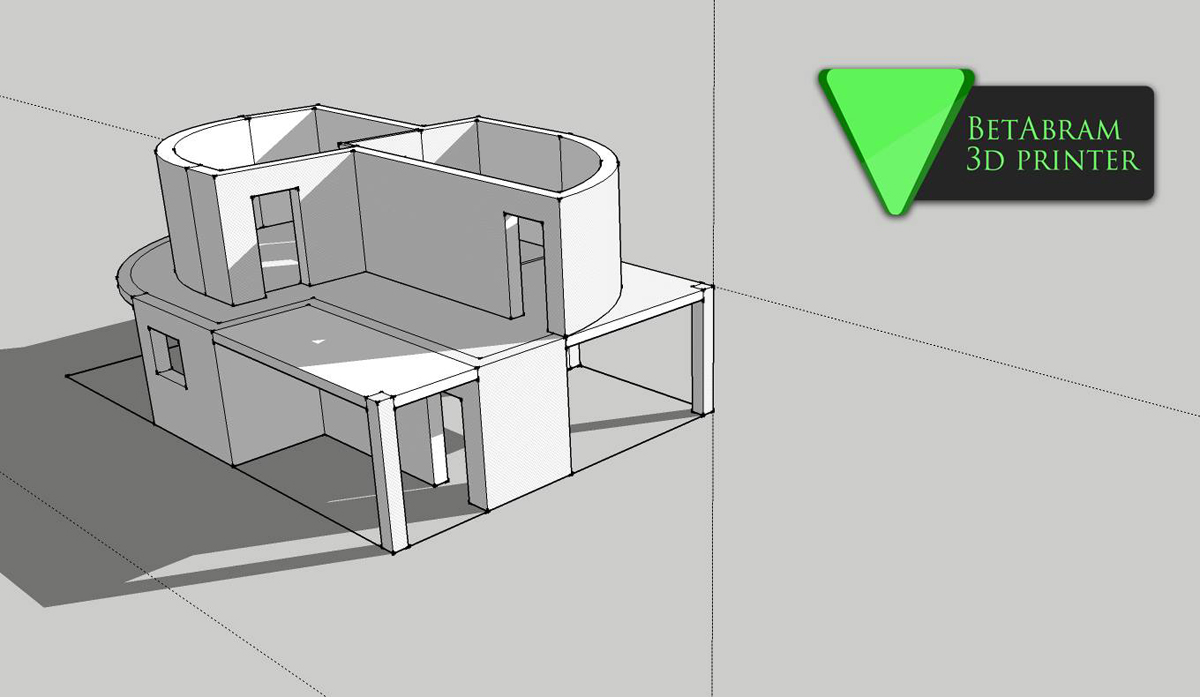 Seeing all that they’ve accomplished and their plans for the future, I asked the firm about how they are able to procure funds for the project.  Mr. Ribič tells me, “Well you know how it is when it comes to the money, there is never enough of it. With more of it our progress would have been a lot faster, but we are satisfy at what point we are now and we think future is bright. At the moment we are funding this project ourselves, not just with the money but also with a lot of hard work.”

As for the motivation behind the project, Mr. Ribič says, “Our vision is that we bring 3D houses to the people, ordinary people. We want to make houses more affordable to the masses. We are also committed to help people. We know the need they have in Africa or any other region in the world which have been struck with natural disaster, so we are also looking into developing material that will have enough quality and not be expensive… We know that without God we would not be able to to this, so we pray that we can successfully complete this project and make houses more affordable for everyone in the world, for our brothers and sisters.”

Definitely a noble cause and one that cannot be accomplished soon enough.  Hopefully, we’ll hear back from BetAbram this July with news of a stunning, new 3D printed house!