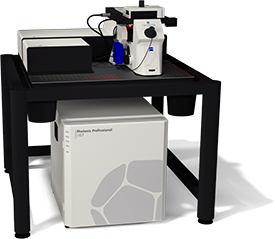 German based Nanoscribe has released its latest high definition 3D printer called Photonic Professional GT, which according to the company, is the the fastest 3D micro and nanostructure printer in the world.  Nanoscribe’s high-end platforms are currently in use in numerous research institutes throughout Europe, mainly found within scientific and medical fields. Photonic Professional GT is based on Nanoscribe´s 3D laser lithography technology and together with its small form factor, can produce objects that are at maximum 1cm in size or at sub-micrometre level at the small end of the scale.

This new 3D printer constructs the tiny objects with complex shaped polymer structures by using a technology called “two-photon polymerisation.” The printing process is speeded up in the Photonic Professional GT by an ultra-high precision galvo technology, which laterally deﬂects the laser focus position by use of a galvanic mirror system. The end result is a high resolution output and rather impressively detailed small objects. 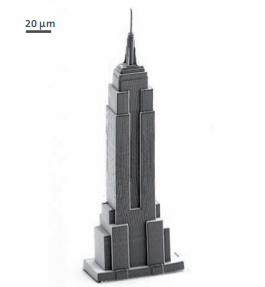 The sample image showcases the kind of results you can achieve with this new machine. The 3D printed Empire State Building is measuring at 220 microns in height, which is 0.22 millimeters. In other words, you can pile up five of these models on top of each other and you just get past 1mm in height. In addition to the famous landmark, the company also 3D printed a 10 micron wide spaceship, which in more familiar measurement equals just 0.01 millimeter.

The video below demonstrates a real time recording of the 3D micro printing process using two-photon polymerization. The CAD designed Hellcat spaceship took less than 50 seconds to make and the length of the spaceship is approximately the same as the diameter of a human hair.