A Return to Seoul at Inside 3D Printing South Korea 2015

Last year, the first ever Inside 3D Printing Conference & Expo in Seoul, South Korea, turned out to be one of the biggest ever editions of the global event, attracting an unprecedented number of visitors and exhibitors. It also broke new ground as it became one of the most noticeable, state-of-the-art 3D printing tradeshows in the Asian region.

For 3D printing in South Korea, it really moved the industry into a higher gear as, a few weeks later, the government there announced the drawing up of a 10-year plan for the Korean 3D printing industry, with the aim of generating 15% of worldwide revenues by 2020. This followed hot on the heels of another big announcement at the Inside 3D Printing event by Korean company Rokit, who revealed their intentions to become the largest entry-level 3D printing company in the world by 2017. To say the least, Inside 3D Printing seems to have had more than its desired effect!

And Inside 3D Printing is back again this year with the promise to do even more. Returning to Seoul from June 24 – 26, the largest 3D printing expo and conference series is primed to cement its status as Korea’s largest annual 3D printing event. Organized by MecklerMedia and KINTEX (Korea International Exhibition Center), Inside 3D Printing Conference & Expo 2015 – Seoul will have its 2nd grand opening in this part of the world on June 24th. With a blockbuster line-up of speakers, exhibitors and sponsors, the event promises to be more exciting and vibrant than ever before encapsulating the latest developments in 3D printing in Korea and the surrounding regions. 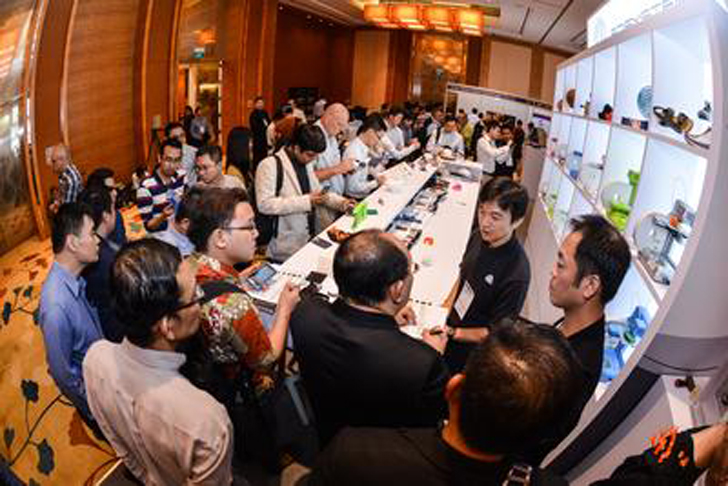 MecklerMedia describes it in a recent press release: “Looking inside the ‘Inside 3D Printing Conference & Expo 2015 – Seoul’ will deliver you the pure pleasure of exploring all 3D Printing secrets of global village from rapid prototyping, fashion designs to surgical implants. More than 100 local/oversea companies with approximately 150 booths are ready to welcome and excite the international buyers and visitors.

“In an effort to provide the visitors with an opportunity to see ‘All about 3D Printing’ at one place, products lineup for this year will much vary. The show covers a vast range of products including 3D printers, 3D scanners, CAD/CAM software, printing material, platform service and luxury goods.”

Terry Wohlers, continuing his association with Inside 3D Printing, will deliver the opening address on “The Next Frontier in 3D Printing”. Other keynote speakers include Daniel Thomsen (General Manager, Stratasys, Korea) – on “How will the rise of 3D printing bring impact”, and Seok Hwan You, CEO of Rokit on the “3D Printing Eco System”. In addition, there will be a host of experts speaking on topics ranging from medical advances & bioprinting, the third industrial revolution driven by 3D printing, to the evolution of toy design, precious metal printing, and a headlining panel discussion on “The Future of 3D Printing in Asia & Beyond”, moderated by Terry Wohlers.

To find out more about round two of Inside 3D Printing – Seoul, or to register for the event as an exhibitor or attendee, visit here.  Enter the code “3DPI” and you’ll receive 10% off.