Dutch studio DUS Architects are making headlines again with their futuristic plans with 3D printing. Last September we wrote about their large scale 3D printer — the KamerMaker — and the company’s plans for using this machine for creating houses from modular pieces. DUS architects are now following up on this and they are working on a plan to print a full size canal house in Amsterdam. 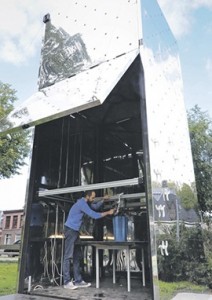 The company is planning to 3D print components of this house using the KamerMaker on site, with a view to starting the project in the next six months. The KamerMaker, which means “room maker” in Dutch, is a sizeable machine standing 3.5 m tall and it resides inside a shipping container. The designers will initially print all elements at a scale of 1:20 before making the final 1:1 pieces.

The house will be built on the Buiksloter-canal in the northern part of Amsterdam, where it will act as a hub for research into 3D printed architecture. During the first phase of development the team will print the façade and the first room, aiming to complete this part before the end of 2013. The first room will be used as the welcome room and following successful completion of this stage, they will print the rest of the house. 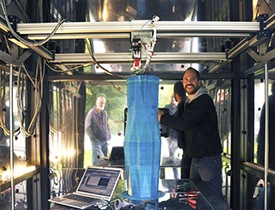 Several companies are racing to get the first 3D printed house completed — as opposed to glossy renderings with all of the right 3D printing rhetoric — and we look forward to reporting on the results as they come.  DUS Architects have been working on this for the past three years, so with some positive wind behind them they could be the first one out of the blocks. 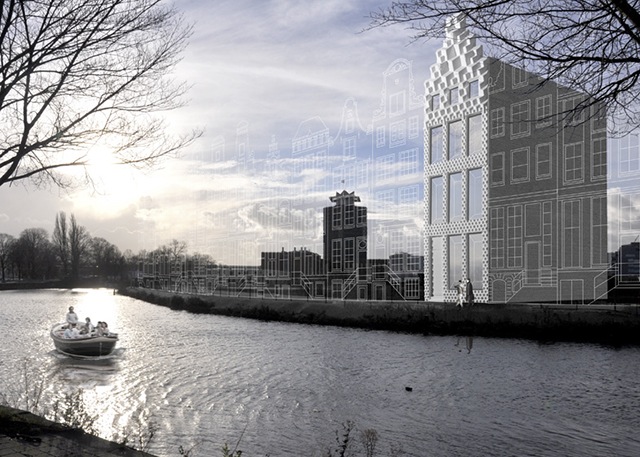