KamerMaker: 3D Printing is Scaling Up

Most designers and makers working with 3D printing are currently having to focus on the size of their objects given the relatively small size of the production capabilities of the current commercial 3D printers. It has been a limitation of the technology for many. However, now, the Dutch architecture company DUS has taken a step forward with this issue with the release of the new KamerMaker, a large scale 3D printer that can produce objects as large as 7.2 feet (w) x 7.2 feet (d) x and 11.4 feet (h). The company has unveiled the KamerMaker as “the world’s first movable 3D print pavilion” with a view to being able to travel around the world and create new rooms or dwellings on site wherever they land their feet. 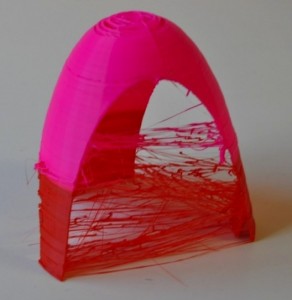 According to DUS, this new innovation is set to revolutionise the building and architecture industries, as anyone who has the skills to use CAD software can create their own house from modular pieces and then assemble these pieces in the same way as for current prefabricated homes. Making your own home is still some way off given that the KamerMaker, at this time, can only print objects made out of PLA, which is a bioplastic made out of corn. As the technology takes further steps forward though, we can expect to see sustainable 3D printed structures being deployed more readily.

The company is also planning to demonstrate the KamerMaker at forthcoming events around the world. This will allow other designers to push the boundaries of art and architecture for creating their pavilions and build in and utilise the latest green technology, such as building using structures that are optimized to capture solar energy. Further down the line, the company is also planning to offer this technology for disaster relief operations to supply temporary housing solutions, required, for example, in flood disaster zones. The vision is that the housing can be fabricated on site and adapted to the local situation and the resources available.

KamerMaker clearly demonstrates the huge potential of scaled-up 3D printing, however DUS is not yet planning to commercialise the technology behind it. Next year the company is doing a tour around the Netherlands to demonstrate the  Kamermaker’s capabilities as a mighty 3D Printer.