Last year, the Inside 3D Printing Conference and Expo in New York City was just the beginning of what would become, one year later, 3D Print Week, a week-long series of lectures, workshops, and exhibits in New York City devoted to our favorite technology.  3D Printing Industry is live at this massive event and it’s clear from the turnout here that the industry is booming.  Not only has the exhibit floor grown to about twice the size, to a total of 10,000 square feet, but the registered attendance has tripled from about 4,000 to over 12,000 people. 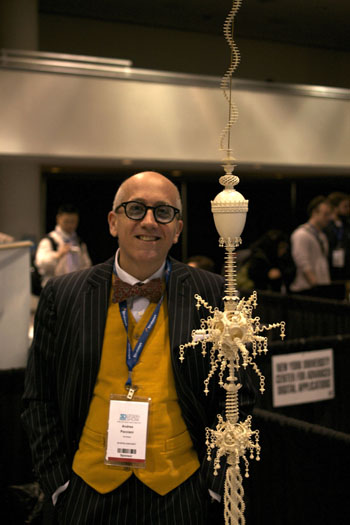 More than the turnout, though, the event itself is evolving in terms of content and concept.  In addition to the previous format of guest speakers and exhibition stalls, this year sees the birth of the 3D Design Show, a large hall devoted entirely to 3D printing artists and designers.  Not only does this add an art-focused portion to the event, but it also acts as a method for the general public to get introduced to the technology in an accessible way, as the 3D Design Show is free for those who register online (or $20 at the door).

Even for those well-versed in 3D printing design, the 3D Design Show offers numerous surprises, from 3D printed clothing to animating zoetropes to entire toy chests of elaborate 3D printed toys.  Perhaps the most impressive was the work of Rachel Goldsmith, the most expressive and intricate 3Doodler sculptures you can imagine.  The 3D Design Show will also see the 3D Fashion Show hit the catwalk tonight.  Hosted by Materialise, this event will showcase the biggest names in 3D printed fashion walk the runway at the Javits Center. 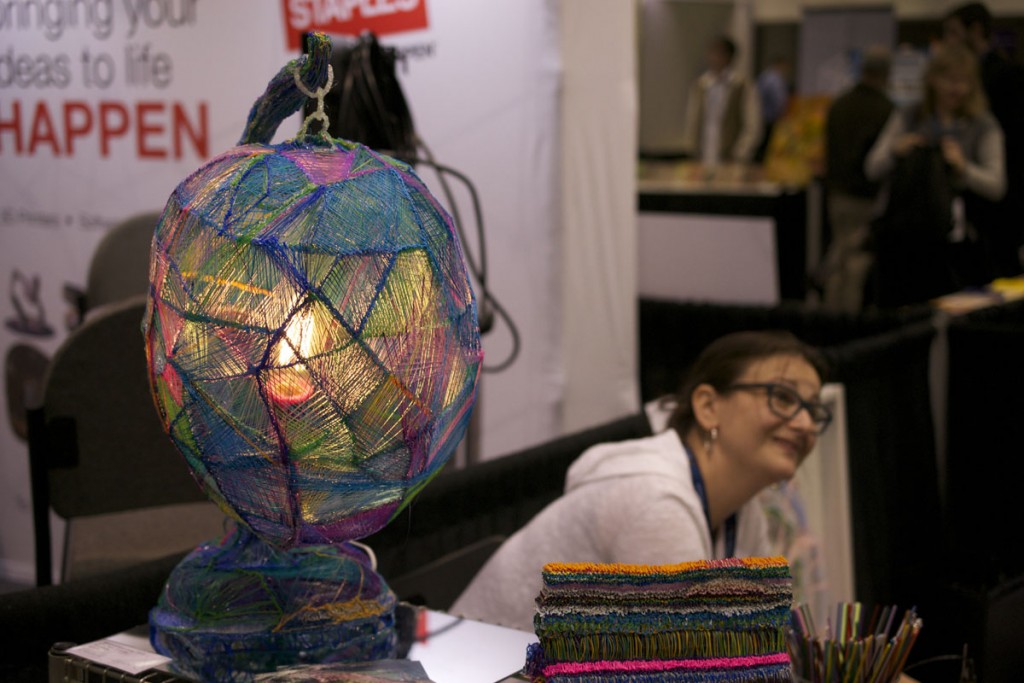 At the same time that the event is booming, MecklerMedia CEO Alan Meckler, says that the 3D printing industry isn’t growing quite as quickly as the initial dot-com explosion, for which he also hosted conventions.  Back then, Meckler says, every large company, like Microsoft, was exhibiting at his Internet-related conference series within a few years of its inception.  3D printing, however, is only slowly beginning to draw big names, with the largest at this year’s event probably being HP.  Word around the conference is that, once they’ve officially released the Multi Jet Fusion 3D printer, the industry’s main players, like 3D Systems and Stratasys, will be driven to innovate at a much more rapid pace.

Speaking of HP, J Scott Schiller, Worldwide Business Director at Hewlett-Packard 3D Printing, gave the keynote this morning, hinting at the future of their business. I’d just missed the talk, flying in from Chicago, but 3DPI’s Andrew Wheeler, also in attendance, relayed that the company will be focusing more heavily on 3D printing as a service, rather than selling the machines themselves. Just one of the many exciting twists that the industry is taking, but whether or not this will bring the innovation that some suggest remains to be seen until the MJF printer is released next year.

Another exciting twist comes from 3D Hubs. Speaking with Bram de Zwart, the company’s CEO, I learned that 3D Hubs announced some pretty big news, today. Via a direct integration with 3D model sharing site Sketchfab, it is now possible to order 3D prints through 3D Hubs in Sketchfab itself. This gives viewers of the over 300,000 3D printable models on Sketchfab to order them immediately from 3D Hubs, taking customers to a list of the closest hubs in their network. The partnership comes along with news that 3D Hubs now has an API for full-color 3D printing. Bram pointed out to me that, because Sketchfab has its own Facebook integration, Facebook users can order 3D printed models directly through the social network.

This last bit of news indicates that, even if the industry isn’t growing at the rate of the dot-com boom, there are really interesting things happening beneath the surface at all times. And this is just day one! Since I began writing this, many folks have come up to tell me even more stories than can be fit into this post here. For that, you’ll have to read part two.