Unveiling of Ultimaker 2 in NYC

In 2010 a Dutch company called Ultimaker, led by Erik De Brujn, came onto the 3D printing scene and brought a whole new way of thinking to the market. Three years later they’ve unveiled an amazing new machine and some other amazing things that will likely contribute to the reshaping of the 3DP landscape — and these contributions are definitely for the better. 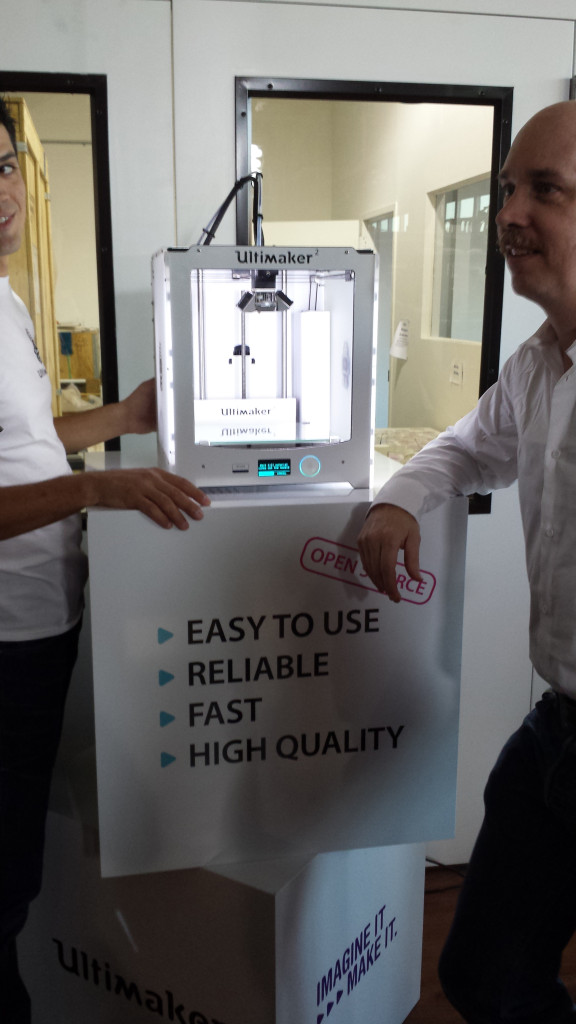 The Ultimaker 2 was unveiled at an impressive shared space called NewLabs in the old Navy Yard in Brooklyn, NY, yesterday evening. I was lucky enough to have made it in time to check out the machines up close and personal. Several announcements were made. Along with the new 3D printer, Erik made it very clear that their goal is to put open source philosophies at the forefront, even if the risk of cloned products is high — and with that he segued into their new projects, which cater to developers, designers and educators. He mentioned there will be something called UltiLabs (very few details given last night). But the big one is YouMagine.com, a site for posting 3D designs with a powerful API allowing for ‘endless possibilities’.

Being there, I asked plenty of questions to make sure I get ya’ll the details! 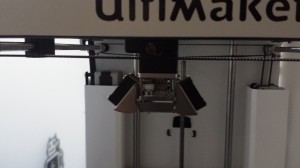 So what’s new here you ask? Aside from the new slick look achieved from the CNC’d acrylic panels, there are numerous — big and small — tweaks to the machine that make it superbly reliable and stable. Almost everything has been upgraded to the fullest. It may look similar to the first Ultimaker, but this is a whole new animal, in the sense that there is absolutely NO WOOD. The bowden filament drive (the part that pushes plastic to the hot end ) has been elegantly designed to hide inside the machine, with an access portion to make it easy to load/unload filament. There is now an included heated build platform that rocks a build volume of 230 x 225 x 205 mm. Previous Ultimaker owners will also be pleased to know that a heated build platform upgrade will be made available to them. Speaking of upgrades, the Ultimaker 2 will have dualstrusion support, maybe not just yet, but from the looks of the hardware, it should be as easy as attaching a stepper and hot-end, which is also very elegantly designed. Martijn Elserman explained to me a bit about the sexy new hot-end, and I can assure you that a lot of thought and engineering went into this new design and it makes for a better, faster more reliable machine. Couple that with the stability of the body and the heated platform and you’ve got yourself a desktop factor that anybody at any level can begin tinkering, hacking and making on.

Another great feature of the Ultimaker 2 is the artisticly designed interface. There is a very inviting turn wheel to scroll through the menu on a very easy to read LCD. New firmware allows you to adjust Flow Rate, Temperature, Speed and a variety of other settings directly from the machine during a print. Ultimaker has also been working with Doodle3D, a group you may remember from a previous article. With Doodle3D anybody can doodle a 3D image and send it directly to the Ultimaker wirelessly, which is already supported.

I mentioned YouMagine, and I will bring it up again just to say how much I recommend to all designers to begin using this right away. It doesn’t look like much right now, but there is a lot going on behind the scenes. The APIs available will allow developers to do quite a bit. Within Cura, an open source slicing engine tuned to Ultimaker, you can send your models directly to YouMagine and attach print settings if you so choose. There was also mention of OpenScad support for doing some customizer apps that would be a lot more interactive and faster, but this is for the future — though likely not too distant.

All in all, I love this machine. Just talking to the developers I can safely tell you that many little issues were given consideration. It is this type of forward and innovative thinking that brings technology into alignment with the path to becoming ubiquitous and user friendly. The company philosophy restores ones faith in the idea of a 3D printing company being all about its customers and users in a time when profits have become more significant to so many. Just looking at Erik’s profile on the reprap wiki http://reprap.org/wiki/User:ErikDeBruijn, and listening to his talk at the unveiling, you can see that success has not changed his way of thinking. The company hopes to have most of the files they’re releasing out in a six month timeframe, to give them a head start on the clones. I’ll do my best to get my hands on an Ultimaker 2 so I can provide a more comprehensive — user — review, until then as always, do your research and feel free to drool over this 1,895 euro beauty (like me) until they start shipping on October 1st.

Moheeb Zara is currently studying Computer Science at Arizona State University in Tempe. Outside of college Moheeb is constantly constructing machines, making custom electronics and fabricating various custom items as a member of a community workspace called HeatSync Labs, with a specific interest in 3D design, 3D scanning and 3D printing. He has worked with professional grade 3D printers as well as entry-level FFF machines.