The White House today introduced a study for an executive order intended to combat patent trolling. Patents have been a significant obstacle to progress and innovation in the 3D printing sector for some time now. So… how effective can the executive order be?

‘There are a growing number of companies, commonly called “patent trolls,” who employ these litigation tactics as a business model — costing the economy billions of dollars and undermining American innovation. In the last two years, the number of lawsuits brought by patent trolls has nearly tripled, and account for 62% of all patent lawsuits in America. All told, the victims of patent trolls paid $29 billion in 2011, a 400% increase from 2005 — not to mention tens of billions dollars more in lost shareholder value.’ 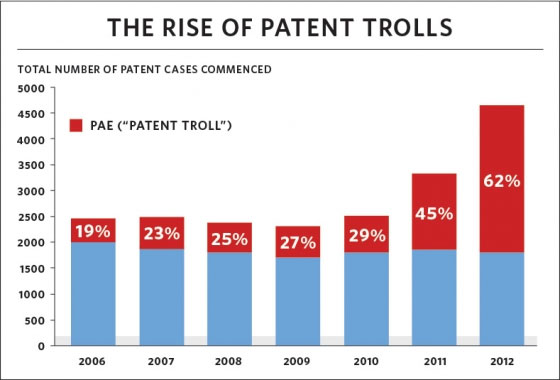 It is a phenomena increasingly tied up with the innovation war.

As preemptive patents are taking much needed concepts out of the game, more companies find themselves engaging in this war now. Between $15-20 billion was spent on patent litigation and patent purchases in the smartphone industry from 2010- 2012. See the smartphone war between Apple and Samsung for one. It got so intense that Apple attempted to patent curved smartphone corners.

Will the new executive order help combat this?

Possibly. But possibly not all that much. Why?

In 2011, US Congress passed the America Invents Act (AIA). It was not very brave, not very bold, an ultimately negligible in the face of pure lust for profit.

The US patent system’s administration facility, US Patent and Trademark Office (USPTO) is under-staffed owning to small government mentality and other factors, and consequently has a 700,000+ backlog of unexamined patents. The order makes no attempt to change this.

Also, according to the Association of Corporate Counsel, a loophole in the AIA meant that patent trolls haven’t been deterred from one of it’s central tenants: suing multiple defendants. The intent was that those who seek to line up a range of companies for patent infringement for profit would find it harder to pull the trigger without significant expense to themselves. This did not happen.

Akin to the AIA, today’s order lacks the means to address some primary and fundamental systematic flaws such as:

Still, this is a step in the right direction by the White House. It took an Executive Order to get it in the face of the liaison-faire enthusiasts. The notion that temptation unto greed is inherent in an unregulated market very clearly expired in 2008, when the Western world’s economies simply, utterly, collapsed. There are some who will point to ‘a few bad apples’ or ‘just an inevitable hiccup in progress.’

Yet a generation are now beset with debt equivalent to the price of a house each. The houses that those individual’s parents purchased mortgages for with toxic assets.  The houses they lost. That’s minus two houses for A LOT of people: people who only had one to begin with.

Today’s regulation may aid fair play in those games. But those games are still a long way from the type that will pull the West out of crisis. And that’s a crisis that has been going on longer than the first world war already.

However, to end on a positive, today may be a great day for product stand owners and smartphone designers everywhere.

Not to bemoan something without trying to change it, I tweeted the Whitehouse asking them if they were taking on more staff at USPTO:

@whitehouse Will the new patent order be combined with an increase in USPTO staffing to aid facilitation of preventing overly-broad patents?

Here is the report, prepared by the President’s Council of Economic Advisers, the National Economic Council, and the Office of Science & Technology Policy: PATENT ASSERTION AND U.S. INNOVATION